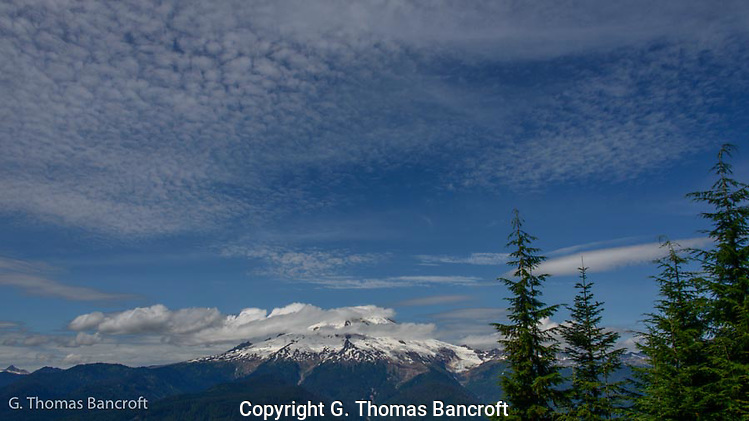 Clouds were drifting across Mt Baker as I climbed toward the Watson Lakes trail head. (G. Thomas Bancroft)

On Friday, I hiked into the Noisy-Diobsud Wilderness to spend the weekend at the Watson Lakes.  This wilderness is southeast of Mt Baker and you get there by driving 10 miles up a one-lane road from Lake Baker.  You can see Mt Baker from the road just before the trailhead.  A few low clouds and a wash of clouds painted the high sky over Mt Baker.    The trail climbs through a mixed forest of silver firs, mountain hemlocks and western hemlocks, some quite large.  I was headed for a saddle between the Anderson Creek and Watson Creek drainages.  As I reached the saddle, several pikas ran across rock piles to duck into their burrows.  They gave their typical alarm “chirp” before descending into their holes under boulders. 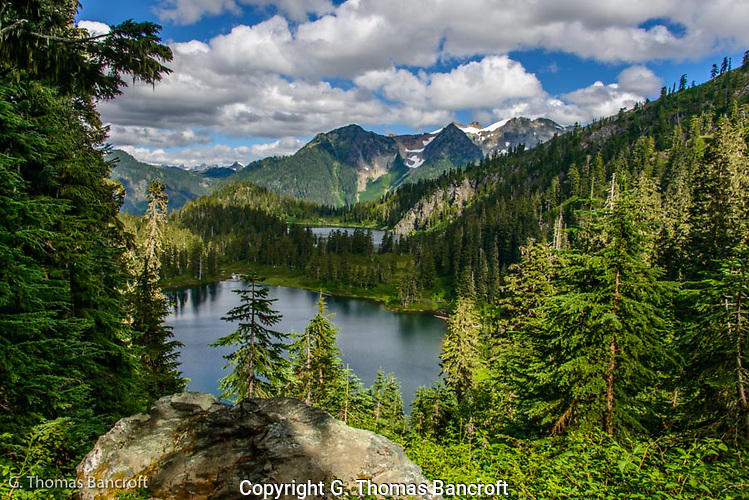 I rounded a corner decending the trail and could look out on to my destination. The two Watson Lakes looked so tranquil and inviting. I paused to take in the view, my excitment increasing, before I started down the trail. (G. Thomas Bancroft)

Through a series of switchbacks, the trail dropped steeply 500 feet to the first lake.  Part way down, I popped out into an opening formed by an avalanche that came off the rocks from above.  A thick carpet of false hellebore covered the slope.  They had grown to more than three feet high.  I enjoy seeing their thick broad light green leaves.  It gives a tropical feel to this subalpine environment.  I have never seen so many in one place.  This opening provided a grand vista of the two lakes.  The water was wonderfully blue with ripples from the gentle breeze, the blue sky and white cumulus clouds reflected in the water.   A cliff rose from the south side of both lakes, forming a high terrace before the slope continued climbing to Watson Peak.   The other sides of the lakes were covered with a mosaic of forests and meadows.  Mountain hemlocks with a scattering of subalpine firs and silver firs dominated the forest.  Heather and blueberries dominated the meadows with rushes, mosses and grass in the wetter spots.  The valley drops along the north side of the lakes toward Noisy Creek.  When a mosquito flew into my mouth, I realized I had been staring at this scene for some time.  I collected myself and headed down the trail, excited to see what I would find. 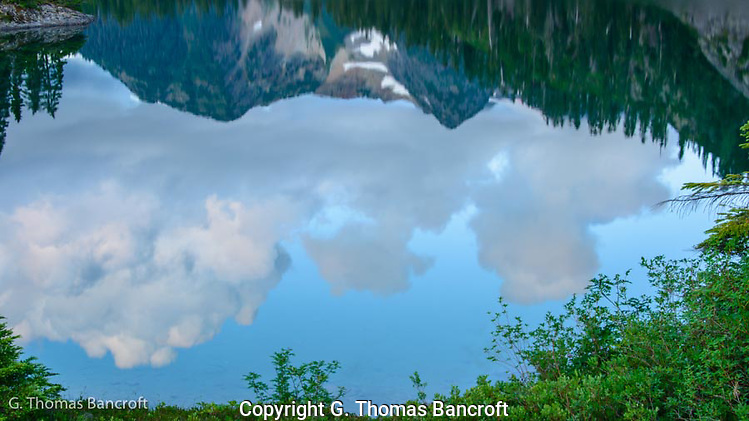 The cumulus clouds reflected brilliantly in the lake.  Ripples from the breeze added soft texture to the clouds.  The reflections constantly changed as the clouds slipped across the sky.  An osprey called briefly down the lake and I watched as it hovered searching for possible fish near the surface.  Eventually it flew around an outcropping along the shore and I lost sight of it.  My gaze returned to the reflections and I realized how bliss I felt standing at the edge of this magnificent lake. 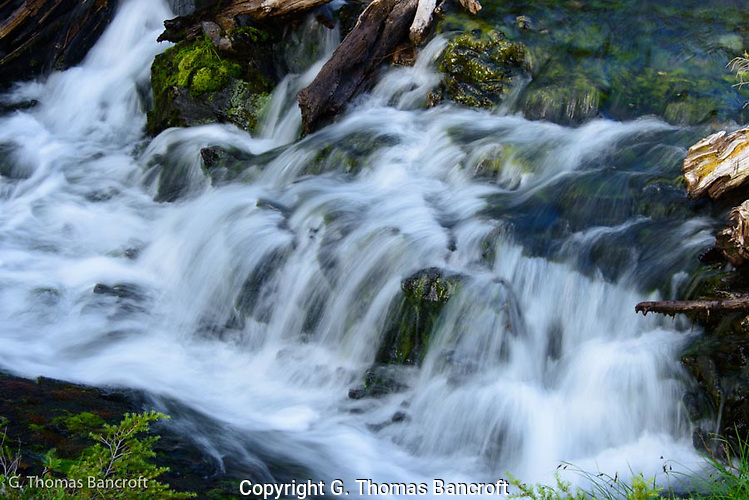 The water spread across a shallow stream before tumbling over a series of rocks. Water droplets bounced off rocks as they continued downstream. The softness was mesmerizing and the sound soothing. (G. Thomas Bancroft)

Two waterfalls on the bluff to the south caught my attention and I began to hear the lovely sound of running water.  Small snowfields were still in depressions in the rocks high on the slopes and from each a stream trickled down, water tumbling off repeated ledges in a series of steps before flowing into the lake.  I realized that the louder music of cascading water was coming from the north and I went to investigate.  Both lakes had outlets that merged into a larger creek just down slope from the eastern lake.  Large drift logs were lodged against each outlet, forming bridges to cross the streams.  On each the water tumbled over a series of ledges forming a delightful cascade.  I scrambled down the slope through a mosaic of heathers and blueberries to get a closer look.  Old flowers still clung to some of the heathers but best of all, ripe blueberry fruit was everywhere.  My pace slowed as I paused to eat as many of these deliciously sweet morsels as I could.  I finally sat just above the junction of the two creeks, eating blueberries and listening to the soothing sounds of the water flowing down stream. 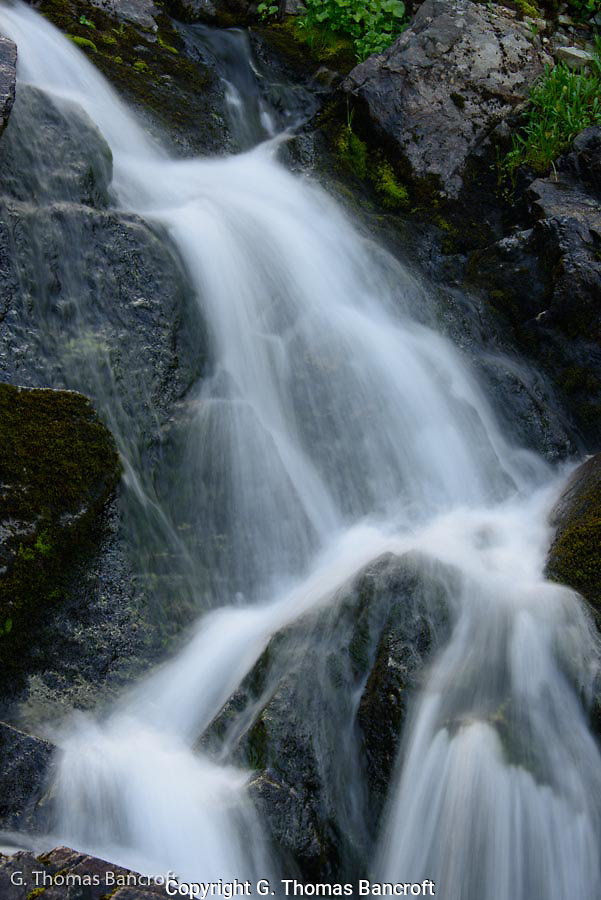 The water tumbled down the rock face creating a wonderful soothing sound. I sat on a moss covered rock for a long time just enjoying the music. (G. Thomas Bancroft)

I camped on a small knoll between the two lakes.  It gave me a great panorama of the eastern lake. From my tent, only a few scraggly hemlocks blocked part of the lake.   As dusk started to develop, I strolled down the rise from my campsite to the edge of the lake.  The sun had set half an hour ago and had dipped below the mountains well before that.  We were entering l’heure bleue, the blue hour, and it should be very serene to enjoy watching the lake drift into night.  I love watching twilight develop and pass over a wilderness lake.

I found a place to sit by the water.  A light breeze was blowing across the lake rustling the needles of the mountain hemlocks behind me.  Several waterfalls were along the cliff to the right, each creating its own gurgling sound as the water tumbled over rocks.  The outlet to the lake was off to my left and the water tumbled down a series of rapids dropping a hundred feet in a couple of dozen feet.  Mountain hemlocks with an understory of blueberries and heather lined the sides of the lake on each side of me.  Insects were humming in the background.  Mosquitoes buzzed in my ear as I waited for darkness.

As twilight progressed, I spotted a little brown bat swooping down over the water and hit the water briefly probably catching an insect rising to the surface.  Trout had been hitting the surface for several minutes suggesting that an insect hatch was in progress.   Suddenly, four more bats joined the first and they flew back and forth hitting the surface on every few passes.  They flapped gently and rhythmically on wings about as long as swallows but broader.  Several more fish hit the surface as I watch the bats.  Slowly the darkness settled onto the lake and I could no longer see the bats so I rose to head back to my tent, a wonderful wilderness experience. 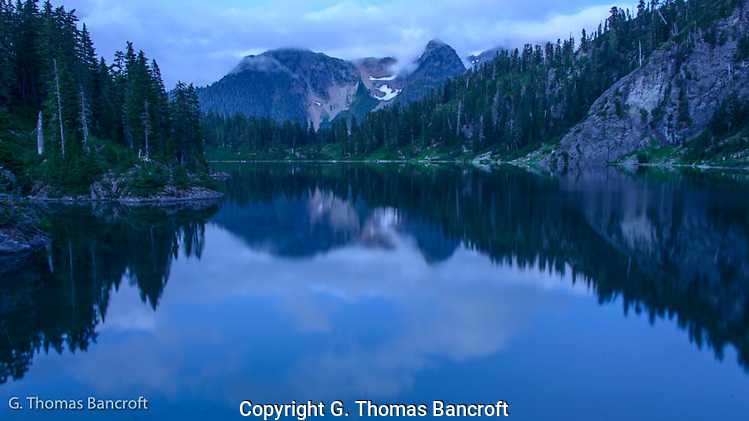 Twilight was setting on Watson Lake. I walkded down to the shore and discovered 5 bats flying close to the water grabing insects from the water surface. A light breeze came across the lake toward me rustling the branches of the trees. It was an incredibly serene setting and I sat until it was totally dark before rising to return to my campsite. (G. Thomas Bancroft)

One thought on “A hike into the Watson Lakes in Noisy-Diobsud Wilderness in the Cascades.”