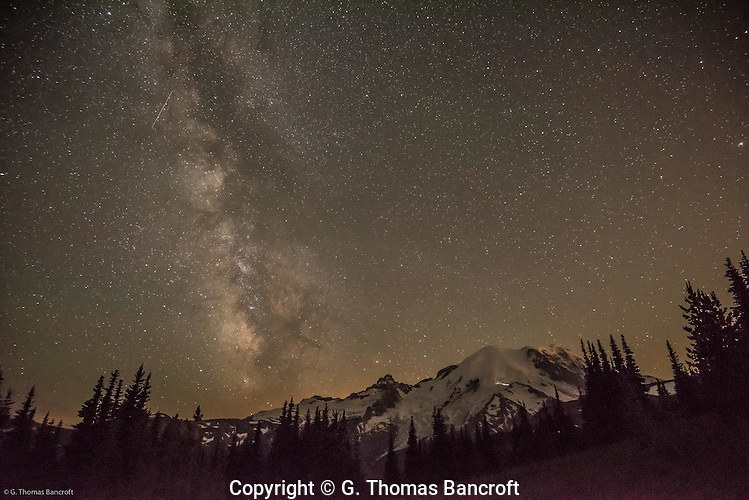 The Milky Way was just east of Mt Rainier at 11:30PM. The lights on Mt Rainier were a base camp as the climbers began their final ascent. They have a 4,000 foot climb from base camp and try to reach the summit by day break so they can start down before the warm temperatures open crevasses. A meteor glowed through the east side of the Milky Way. (G. Thomas Bancroft)

I hoped that the New Moon would allow the stars to pop in the night sky and that Sourdough Ridge might be the perfect place to watch the Milky Way rise from the east and drift over Mt. Rainier so I headed to Sunrise in Mt Rainier National Park. From Sourdough Ridge, I expected a good view of Mt Rainier to the southwest and should be able to see Emmons Glacier on the left and Winthrop Glacier on the right. Both glaciers have their massive rivers of ice pouring down from the summit.  Little Tahoma Peak rises to 11,138 feet east of the volcano’s summit, well short of 14,410-foot volcano summit. The Milky Way over Mt Rainier was my goal.

At 10:45PM, I hiked in the dark to find a great place to sit on the ridge top and watch the stars twinkle.  A number of 1 – 2 inch crickets crawled on the trail and I stepped carefully around them as I climbed. At the crest, I discovered other pilgrims of the night sky. Two young couples stood at the top chatting and watching the stars.

After we exchanged greetings, they asked, “Do you speak Russian?”

“Unfortunately, no” I replied and asked “are you visiting from Russia.”

They said “no, we are Ukrainian and live in Seattle now and had just come to watch the stars. We will drive back to Seattle later tonight. We don’t like to speak in Russian in front of someone that doesn’t understand Russian”

They stayed for an hour after I arrived and we continued to chat in English. Not 15 minutes after the Ukrainians left, I saw a light working up the trail from Sunrise. This time two young men and one woman climbed to share the ridge with me. Right after they arrived, a large meteor lit the western sky for a split second, the meteor exploded in a brief burst of light mid-way through its light trail. The people drifted to a bench down the way from me and began to chat in Arabic. They stayed until 1:30AM before heading down the trail. Watching the Milky Way and sharing a wilderness setting are an international joy, feeding the soul and stimulating thought.

Two meteor shows occur in late July and early August. The Delta Aquariids shower peaks in late July and can have as many as 20 meteors per hour. The Perseid meteor show just began this week and when it reaches its peak in early August can deliver as many as 100 per hour. It takes 20 minutes for ones eyes to adjust to the dark and become most sensitive to detecting meteors. I checked the back of my camera too often for my eyes to be at a peak for very long and yet I still saw many dart across the sky. My camera detected others that I missed including one shot with three in it.

The Milky Way is a spiral barrel galaxy and our solar system resides in one of the outer spirals. A spiral barrel galaxy looks much like a pinwheel if we looked down from space onto it. Our galaxy has several billion stars in it and I wondered how many I could see in this night sky. Our solar system is 28,000 light years from the center of the Milky Way and we spin around that center at 600,000 miles an hour. It will take us 225 million years to go all the way around again. The last time our sun was in our current position in its rotation around the middle of the galaxy, the dinosaurs had just started their evolutionary radiation.

Just to the north of my perch, I could see the Big Dipper and I followed the back of the bowl to find the North Star. Seeing the Little Dipper proved more difficult because so many stars were visible in the moonless night. The North Star sits at the end of the handle for the Little Dipper. I tried to photograph the Big and Little Dipper but all the stars captured by my camera made it impossible to identify them.

As I stood there, climbers across the White River began their awesome pilgrimages. By 11:30PM, I could see lights at Camp Schuman at 9510 feet on Mt Rainier north slope. This is one of the base camps for mountaineers to begin their ascent to the summit and it sits where the Emmons and Winthrop glaciers divide. Climbers begin their ascent in the middle of the night with the goal of reaching the summit around daybreak because they want to descend the mountain before warm temperatures in the day begin to open crevasses. Just after midnight, I began to see lights leaving from Camp Muir (10,188 ft) on the east side of Mt Rainier between Little Tahoma Peak and the summit. As the night progressed, I watched at least three parties leave from Camp Schuman and maybe as many as 5 groups from Camp Muir. Over 10,000 people attempt to climb this volcano each year and the summer is a busy time. I could see the direction of their headlamps, discerning the back and forth motion as they inched upward. A few times the lights became brighter and I guessed that they had pointed their headlamp directly at me. I remained enthralled with their progress; the stamina and endurance it must take to climb over 4,000 feet on their final ascent to the top. I wonder what the view form the top must be like; I am sure it is inspiring.

I spent 4 hours sitting and shivering on the ridge watching the stars, meteors, and the climbers. I found it lovely, mesmerizing and truly inspirational. How lucky we are to be alive, to contemplate life, and to wonder about the universe, the Milky Way and our little planet. 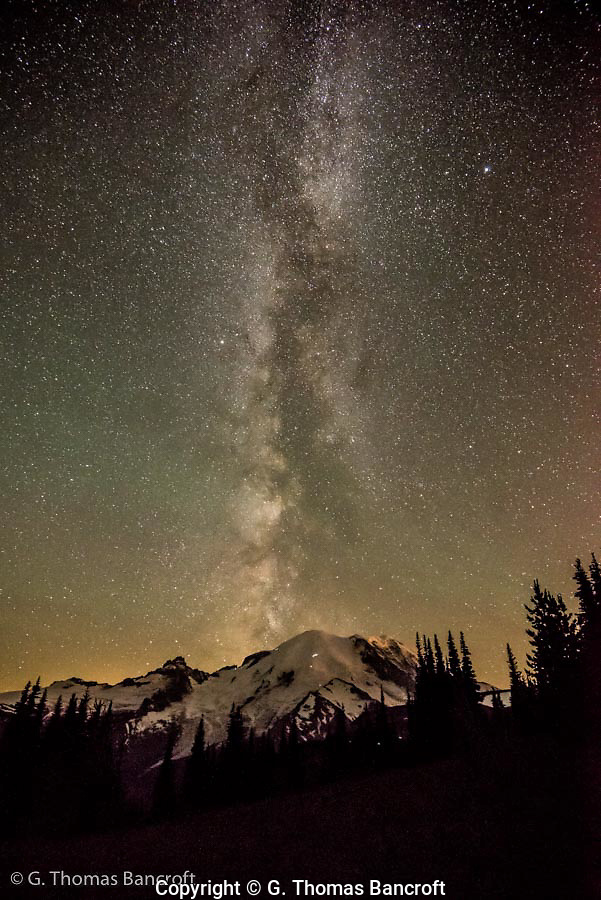 By 2AM the Milky Way was right over the summit of Mt Rainier and looked as though it was coming out of the volcano. Three parties climbed the north side of the volcano and at least three more were climbing the ridge along the east side. (G. Thomas Bancroft)