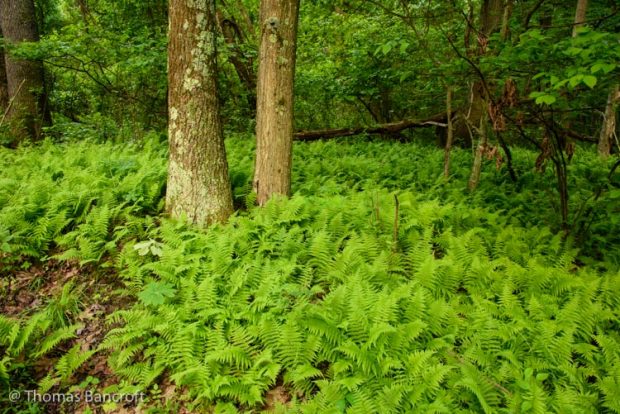 The eastern deciduous forest in Western Pennsylvania is full of bird songs in the spring.

The morning fog filled the landscape with a sweet damp smell and dawn had only just started. It was late May in Western Pennsylvania. The eastern deciduous forest surrounded me. A few hemlocks grew on some north-facing slopes, but mostly oaks, cherries and maples dominated the landscape. The gurgling sounds of the stream filled the atmosphere and contributed to the sublime feeling.

I had just rounded a corner when I heard the first morning notes of a Wood Thrush. The flute-like whistle resonated through the forest and immediately a second and then a third began to sing. I stopped my walk to listen and imagined this cinnamon bird with a streaked breast sitting a dozen feet up in a tree proclaiming its territory. Since moving to Seattle, I’ve missed hearing this bird in spring and summer. When I lived in Maryland, I looked forward to its return in late May. One would sing from the oaks just up the street from my house, and I’d listen from my backyard.

We often call migratory birds like the Wood Thrush that breed in the United States “our birds,” but is that the right characterization when they spend most of the year farther south. Wood Thrushes winter from southern Mexico south through Panama, spending at least as much time there as they do on the breeding grounds.

In 2009, I was invited to do a Christmas Bird Count in Costa Rica and arrived late at night before the count day. The next morning, we met at 4 AM to begin our search. The first bird we detected was the “pit-pit” call of a Wood Thrush. Later when talking with folks, I thanked them for sharing “their bird” with us in the United States and told them about the thrill I had each spring on hearing them sing.

Although populations of Wood Thrushes are still strong across the northeast, their numbers have decreased by more than 60% since 1966. They are now listed as a species of “Continental Concern” in the 2016 State of North American Birds’ Watch List.

Other birds, including chickadees, titmouse, cardinals, and Carolina wrens began to join the wood thrushes in morning melody. I closed my eyes to take in the beautiful sounds before continuing my walk.