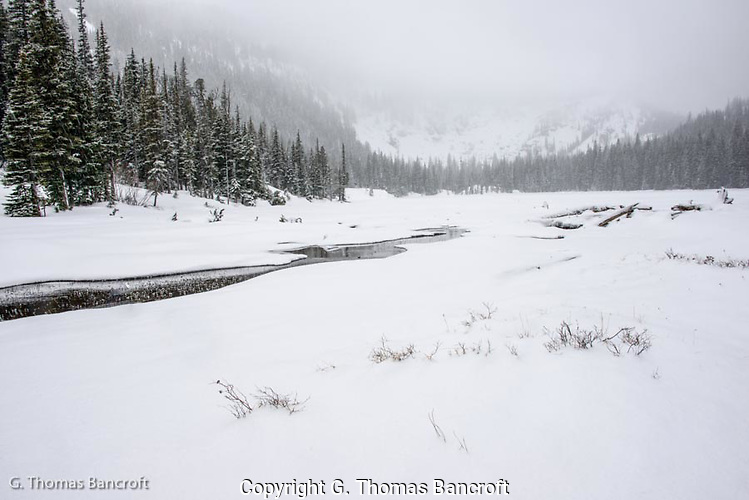 At 5,000 feet elevation on the eastside of the Cascades outside of Leavenworth, Scottish High Camp sits beside Alpine Lakes Wilderness. I stayed in an A-frame cabin with a wood stove to heat the place and a propane light and cooking burners.  I wanted to snowshoe into Alpine Lakes Wilderness.  The camp is 3,000 feet above the parking lot along Us 2 and I rode a 4-wheel vehicle up the first half and a snowmobile the second half to the camp.  Almost 2 feet of snow covered the forest floor and snow flurries were drifting down as I moved into my cabin.

I left early in the next morning to snowshoe over the ridge and down to Lake Julius. The trail moved through a forest dominated by large noble firs. This tree, a popular Christmas tree, can grow to 8 feet in diameter and over 275 feet tall. Most of the ones I saw were a foot to 2-feet in diameter but I did find a few with more than 3-foot diameter trunks. These trees do not tolerate shade and need to be first in the regeneration of a forest.  This tree has high strength for its weight making it historically a valuable tree for airplane building and ladders. It still remains a premier timber tree and the Forest Service often replants this tree following timber harvest. Silver firs, Douglas firs, western hemlocks and a few white pines were interspersed with the noble firs. 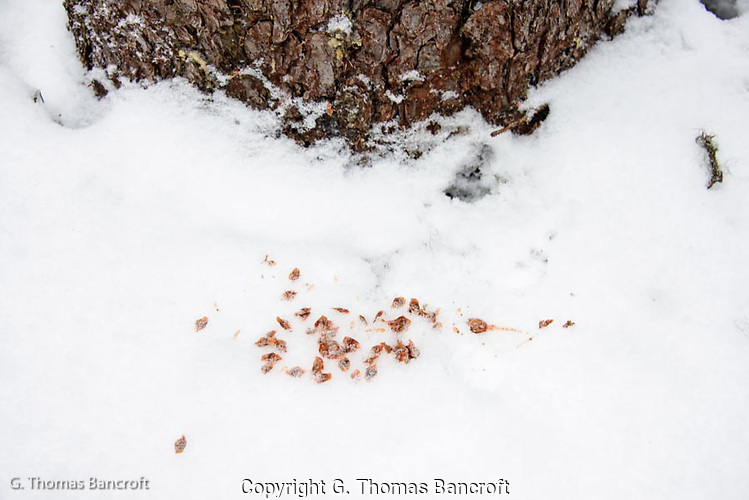 In most years, noble firs produce abundant cones; a favorite food for Douglas squirrels and I saw and heard many squirrels along the trail.  One came down a tree trunk to 10 feet above the ground and let me know that he was not happy that I was walking in his woods.  All fall, Douglas squirrels cache cones under logs, in the leaf litter, and other suitable places for them to dig up later for eating. I watched one race across the snow and behind a trunk as I approached.  I found a number of places where they had retrieved a cone and taken it apart to eat the seeds, scattering the scales across the snow.

Fresh snowshoe hare tracks crossed the trail in many places. I hoped I might flush one but never did.  They are primarily nocturnal and find thick cover to hide during the day. In winter they turn white and hide by freezing in place, blending into the snow, making them difficult to spot. Their hind feet are long, 4-6 inches and have fur extending out to give them broad feet that helps them stay on top of the snow. The footprints suggested that they were moving quickly across my path. The two front feet landed first in the snow and then the hind feet several inches in front and each set of prints was 3 to 4 feet apart. They are agile and can run up to 25 mph and jump as far as 10 feet.

During winter hares eat bark and buds and the young firs and hemlocks with branches close to the ground in this forest would provide abundant food. Hares travel over a 10 to 25 acre area in search of food and shelter. Hares reach their highest densities in young lodgepole pine forests, which have good cover, and these pines are more nutritious than firs and spruce.  But lodgepole pines self prune, loosing low branches after a few years eliminating both cover and food, and hare populations then crash.

In the boreal forest of Canada and Alaska snowshoe hare populations fluctuate through a 10-year cycles.  Winter food and disease seem to drive these cycles. Canada lynx populations track these cycles closely and may play a role in causing the peaks. Snowshoe hares are the primary prey of lynx, which also have broad feet and long legs allowing them to walk on snow. I looked for lynx footprints, hoping that I might find some. Lynx are a threatened species in Washington. Prior to 1947, a $5 bounty on lynx resulted in their populations being decimated. The state implemented a ban on hunting and trapping them but their populations have not fully recovered. Historically they ranged down the eastside of the Cascades above 4,000 feet through Alpine Lakes Wilderness but according to the Department of Fish and Wildlife’s recovery plan, there has been no sightings this far south in recent decades.

At the ridge, I could look down into Roaring Creek Valley. Lake Julius was a mile up the valley. Snow showers moved through the landscape and at times were heavy.  Clouds danced across the hills, on occasion totally blocking my view of the far slope. The dusting of white on the trees made a stunning setting. Fresh snow began to cover my tracks and I headed down the hill toward Lake Julius.

Ice and snow covered Lake Julius but Roaring Creek remained open. The lake lies at the base of a large cirque and the far shore and headwall drifted in and out of the clouds, never reveling the headwall’s top. Firs lined the bank of the lake on its other sides.  As I stood watching the scene, the snow began to build on my shoulders and cap; close to an inch of snow accumulated in the hour I wandered along the shore.

Sigurd Olson in his book, Reflections from the North Country, discussed how before humans dominated the landscape “great silences” permeated the landscape. He defined great silences to “include the temporary physical sounds of wind and falling water, the roar and crashing of prehistoric creatures, natural in origin and always present. The silence itself was beyond the ordinary sounds of nature: it dealt with distance, timelessness, and perception, a sense of being engulfed by something greater where minor sounds were only a part, a hush embedded in our consciousness.” I spent more than an hour along the edge of this subalpine lake and think I came to appreciate what Olson was professing. It is more than just quiet. The tingling of snow was constant on my jacket; a few breezes rustled branches at one point; two ravens squawked as they flew unobserved through the thick clouds, and a few Gray Jays fed in the trees behind me. I spent more than four hours exploring this wilderness and I had not heard or seen a person. It was marvelous to feel I had this vast landscape in front of me in its primordial condition to myself. I stood in silence for a long time along the lakeshore until I realized it was late and I had a trek back to the cabin. 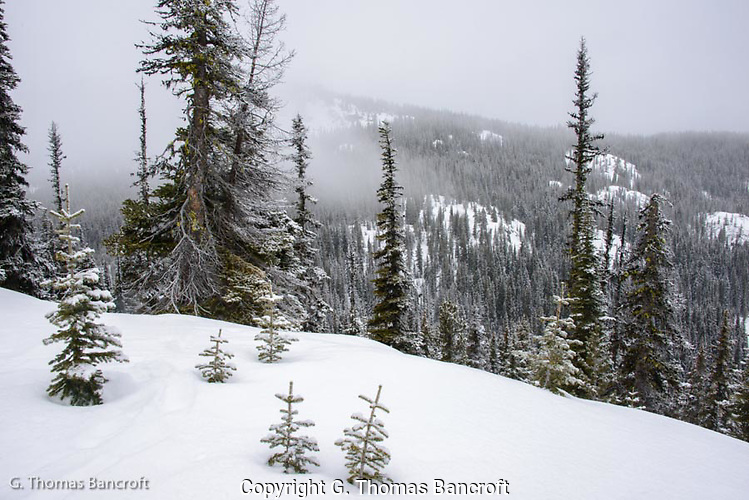 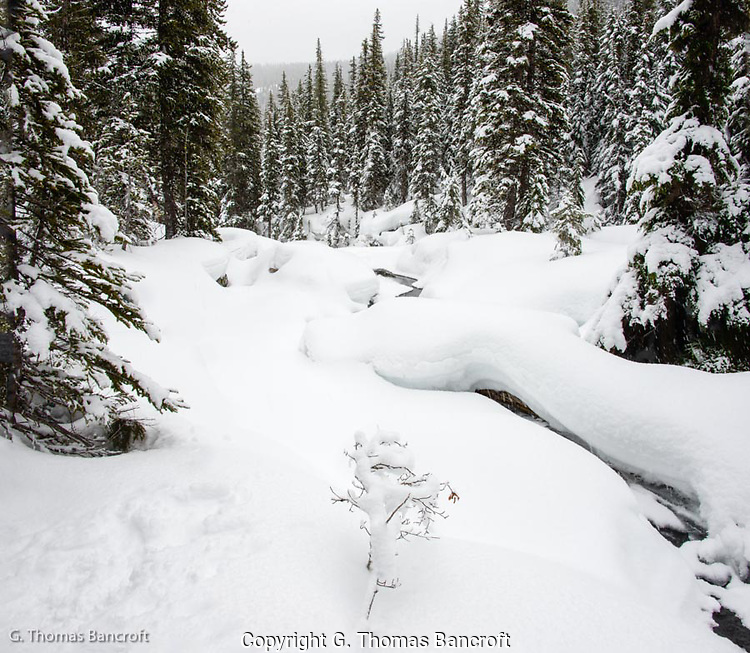 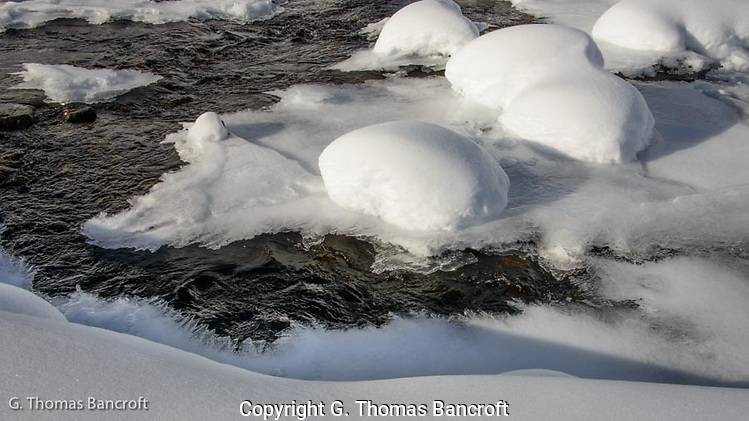 Light waist deep and sparkling in morning light
Crust thick with fluffy white top
Ice crystals line the creek like
Lace on a fancy gown or
Maybe feathers growing out from shore
Pools run smooth and quiet.
The water dark, almost black against,
The white reflected in the water.

Sudden movement
Upstream, not water
What might it be.
I inch toward the creek
Senses alert.

Grey-chocolate puffball
With legs and sharp bill
Flies down, Alights on a rock
Water rushes around the perch,
There it bobs up and down
It peers one-way and then the next

Dives right into water which
Must be ice cold right now.
Flies out of water to
Another rock. Swims through
Pool of tumbling water with
Head under, looking for what.
A trout cruises by, both searching
For food. The Dipper flutters to snow bank.

Walks lightly, leaving
Deep foot prints as it goes.
Water droplets roll off back,
Feathers as dry as fresh towels
Scolds loudly at me, leaves
Gliding down stream, on
Stiff steady wing beats. 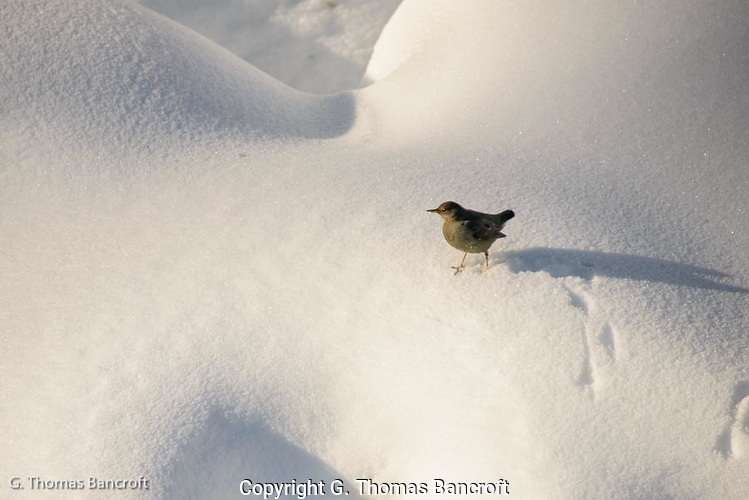 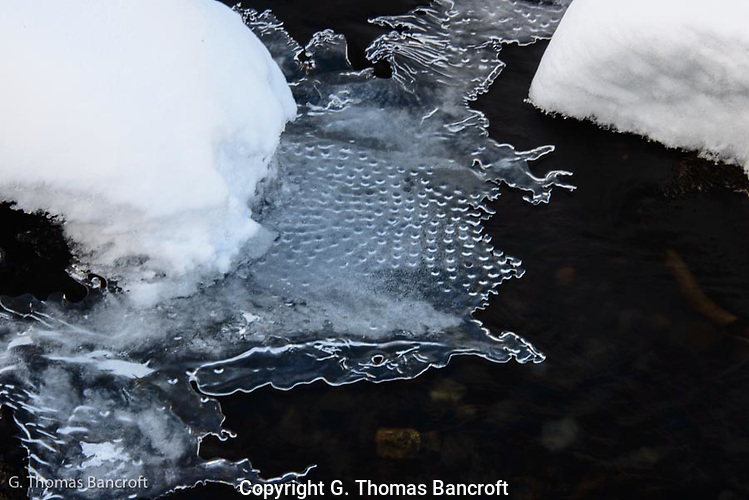 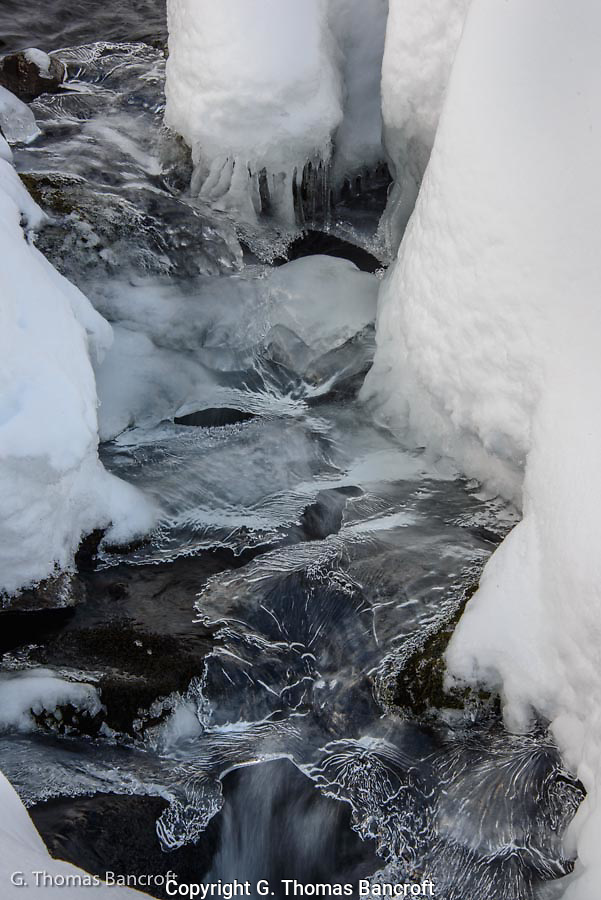 Ice dangles above the rapids in the creek forming an intricate design. (G. Thomas Bancroft)