Shortly after sunrise on Sunday, a friend and I stopped by the Hayton Reserve along Browns Slough in Skagit County to see what might be around. Tundra swans had spent the night along Skagit Bay and were just starting to wake up. Several family groups climbed from the horizon to a hundred feet and flew right up the slough and over our heads toward inland fields to feed. We had a chance to watch their stunning five to six foot wingspans as they flew over us with their rhythmic powerful wing beats. I could almost imagine feeling the power as one group passed right above us. I tried to reach up to feel more of their power but I couldn’t for I was bundled thick with layers to ward off the 21-degree temperatures and light wind. 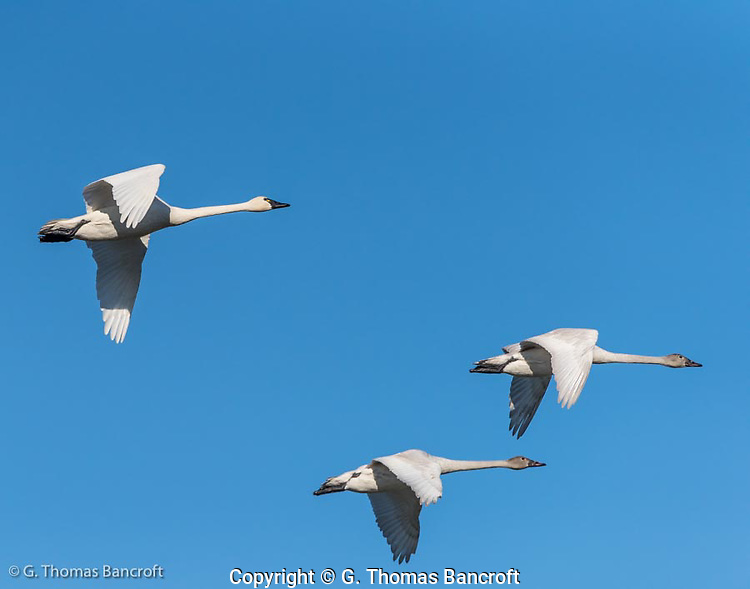 We could see their individual flight feathers on each wing as they passed overhead. The primaries at the wing tips flexing with each power stroke while the secondaries along the middle of the wing providing the lift for flight. Covert feathers overlap the flight feathers to give an aerodynamic shape that engineers try to imitate on airplane wings. Several dozen passed overhead during a 30-minute period. Most came in family groups of 2 to 4. Swans pair for life and young with their gray-brown heads and dirty white body feathers spend a year with their parents before separating when swans return to the Arctic to breed in the summer.

Later in the day, we found some of their bigger cousins, Trumpeter Swans. Most adult tundra swans have yellow lores, the area between the base of their bill and their eyes while trumpeter swans have black lores. It is surprising how hard it is to tell these two species apart if they are not together. Trumpeter swans, weighing upward of 23 lbs., are almost twice the size of tundras at 14 lbs.

After the swans had finished flying over, we found a few greater yellowlegs wading in shallow water, their yellow legs shinning brightly in the sun. Several mallards and four hooded mergansers fed in the slough. A great blue heron with its eyes partially closed sat on the bank warming itself in the morning sun.