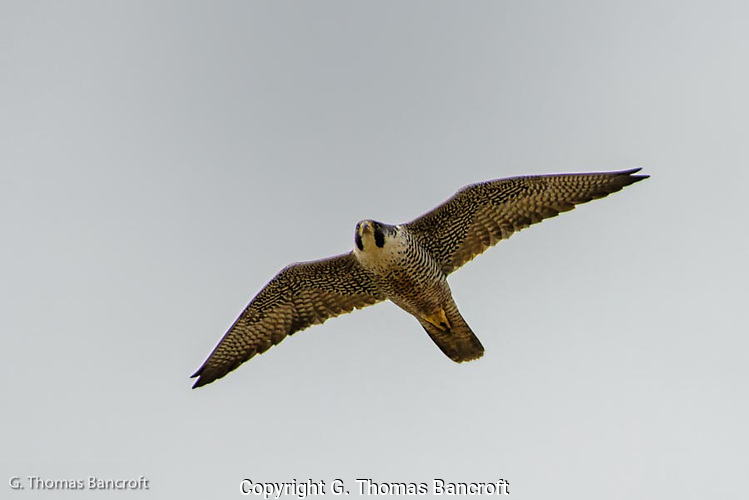 The Peregrine Falcon swooped in across the field where a small flock of ducks were feeding. The ducks took flight and the falcon flew on to a tree on the other side of the field. The grace and agility of this magnificient bird was awsome. (G. Thomas Bancroft)

The other day I was crossing the George Washington Memorial Bridge on Route 99 in Seattle when I spotted a Peregrine Falcon sitting on one of the light poles on the bridge staring west, probably in search of prey such as a pigeon or flying duck.  It reminded me that conservation is very successful when we can identify the threat and deal with it.  When I was in high school in the late 60s in Pennsylvania it was a rare sight to find a Peregrine Falcon.  They had virtually disappeared as a breeding bird in the contiguous 48 states because of the pesticide DDT.  The accumulation of DDT in their body resulted in the thinning of eggshells and the eggs would break when the parent attempted to incubate.  DDT was banned in the 70s and considerable effort was put into captive breeding and ‘hacking’ out young into the wild.  Now Peregrines are breeding in many places.

In the wild in preindustrial times, they typically nested on cliff faces.  Now they often use bridges and buildings, finding ledges very similar to cliff faces.  One may be nesting under the route 99 bridge?  A pair is definitely nesting in downtown Seattle right now.  You can watch it on a cam that has been set up to observe the nest.

I was birding in Skagit County in March with several friends and we watched a Peregrine Falcon swoop in on a flock of feeding ducks.  It did not catch one but we were so impressed with its grace and speed.  This falcon is amazing to watch flying; they are so agile and quick in their flight. Peregrine Falcons are now pretty common in the Pacific Northwest especially as migrants and wintering birds.  Keep your eye out for them when you are about.