Bald Eagles began to converge along one section of the beach in Boundary Bay. A small group settled together and additional ones were spaced out from this central group. I wonder what brought this magnificent assemblage of eagles together in one place? (G. Thomas Bancroft)

I was at Boundary Bay in British Columbia on Sunday to look again for Snowy Owls.  We found one way out in the marsh grassland habitat toward the bay and a second closer to us sitting in a parking lot inland from the dike.  There were about 20 people along the dike when I arrived and most were focused on the Owl in the parking lot because it was closer and kept adjusting its stance making us think it might fly.  It was as if the owl was teasing us.  About a dozen photographers stayed there all morning hoping for a great shot.  Many dozens of additional people came and spent a few minutes looking at the owls.

At one point I stretched my neck and in the process looked straight up into the sky.   A kettle of Bald Eagles was soaring above.  Several dozen adult and immature birds were gliding easily on the thermals and circling lazily on their seven-foot wingspan.  The updrafts or thermals must have been good because I didn’t see any individual flap and they seemed to be climbing slowly.  At times several individuals would come into my binocular view at once.  I did not see any interaction between these soaring birds.  It was spectacular to see so many eagles at once.

When I looked down and out into the bay, I saw an equal number of eagles flying in circles along the shore.  Gradually over a 30-minute period these individuals settle to the shoreline.  At least a dozen eagles landed close together (in the center of the picture).  For several minutes I studied this group carefully through binoculars and didn’t see any interactions between them and could not tell if they were feeding on anything.  Others landed in singles or pairs at various distances out from this central group.  At several points small flocks of shorebirds flew along the line from left to right and other shorebirds fed in the shallows.  The eagles did not appear to pay any attention to these shorebirds nor the shorebirds to the eagles.  A number of the people shifted their focus from the Snowy Owl to these eagles and I heard the rapid clicks of pictures being taken.

What was happening that brought all these eagles together?  Could it be food or simply a good place to rest in the late morning?  Maybe fish had moved into the shallows.  To humanize it, one might imagine this being a conclave of eagles coming together with the central group making some decision and the rest waiting for the answer.  Boundary Bay must be a productive feeding area for Bald Eagles for we could see close to a hundred eagles at one time in a 360-degree scan of the bay, land, and sky; both fascinating and amazing to see.  The Pacific Northwest is graced with some spectacular natural wonders! 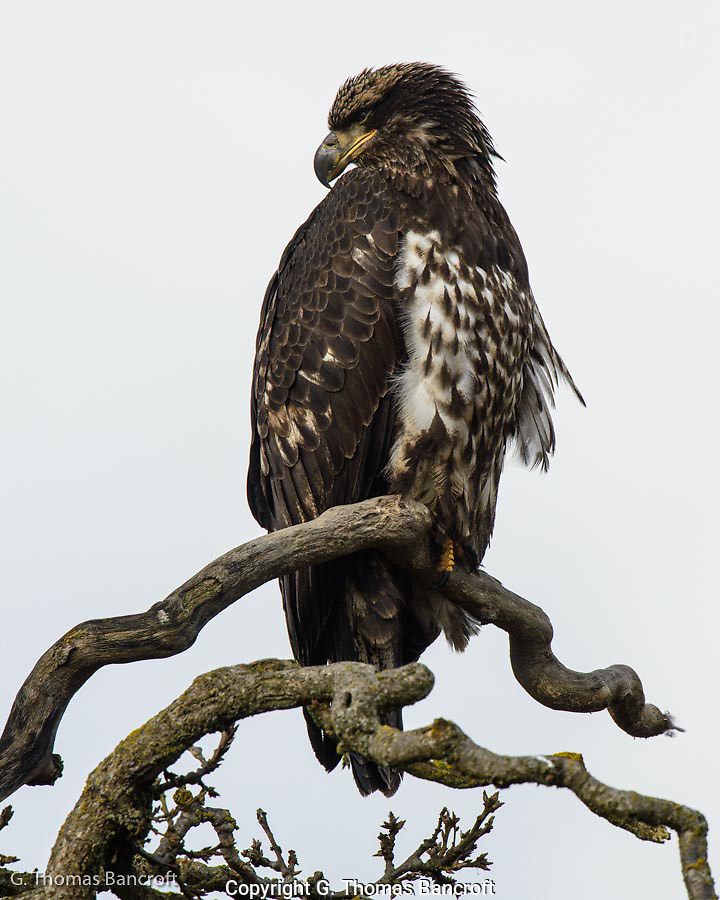 The Bald Eagle sat on a branch gazing out across the marsh. It stayed on the branch for several hours allowing people to study it carefully. Its powerful beak and tallons were obvious. (G. Thomas Bancroft)

One thought on “A Conclave of Bald Eagles at Boundary Bay”