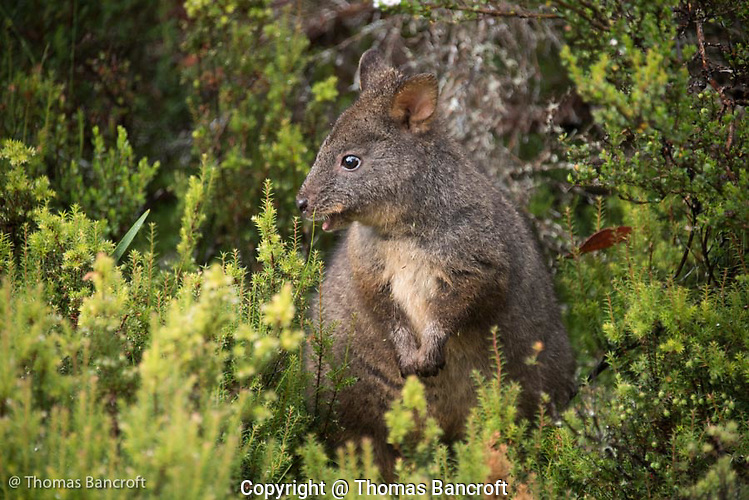 A rufous-bellied pademelon pauses from feeding to consider if danger is near and it should flee. (G. Thomas Bancroft)

I rounded the corner and spotted her sitting beside a bush. Her fine features, dainty little hands, and smooth curves took my breath away. I couldn’t help but stare at her. She flexed open and shut her delicate small fingers and brought her hands together and then apart as she chewed quietly on something. Occasionally, her pink tongue would slip between her soft lips suggesting that the flavor of her food was satisfying. She cocked her head to one side as she gazed down the trail; she had not spotted me. Her brown eyes twinkled in the soft light. She did not appear disturbed by the light drizzle or the water droplets forming on her hair. Droplets coalesced into larger ones that meandered down her face. I stood frozen not able to take my eyes off such beauty, features so fine, such a marvelous example of life.

She turned toward some movement in the bushes and a smaller version of her hopped out from under a bush to sit beside her. Two miniature kangaroos, two pademelons, a mother and her half grown joey, sat right in front of me, not more than a dozen yards away. My blood raced through my arteries as my heart pumped as if I had run a marathon. I stared frozen in the rain as I watched these two magnificent animals chew on grass. I can’t believe that these miniature kangaroos, the mother only 18 inches tall and the joey only a foot tall, were so close. I worked hard not to move.

The cry, “Mummy, Mummy, can we go play in the playground, pleaseeee,” catches my attention and brings me back to Seattle. I am sitting on a bench in Cal Anderson Park in Seattle Washington. It has been two weeks since I returned from Australia and saw the pademelons in Tasmania, yet the image in my mind is still so vivid, so real as if it just happened and I keep returning to the thrill. I watch the boy, maybe 7, hop with his knees tight together down the hill toward his mother just like a kangaroo. He yells, “Please, mummy, can we go into the playground.” His mother roots through her purse for change for the parking meter. His brother, maybe 5, slips and falls as he tries to climb one of the cherry trees, hitting the ground with a thud but he simply stands back up to attempt to climb the tree again. I chuckle as I watch them. So much life in these boys it reminds me of when my daughter was their age.

My wife and I use to take our daughter to playgrounds when she was young. The Miami Zoo had wonderful playgrounds and we would tour the park looking at the animals and stopping at each playground for a little diversion. Our daughter would scramble over all the equipment: sliding, climbing, jumping, running, and falling. So much energy and life! Just like those two pademelons that appeared to be enjoying a fine meal and the drizzle wasn’t going to bother their outing. This trip to Australia was my first trip overseas by myself since my wife died. My daughter now lives in Sydney Australia and I went to see her but also to see some of this mythical continent with all its marsupials and unique birds. The boys’ mother must have said yes for they run into the playground and onto the jungle gym as she strolls up the hill past me. I drift back to Australia and remember that I moved just slightly when I no longer could hold my breadth and stiff stand on the trail. The mother kangaroo immediately saw me and began an intense stare trying to determine if I was dangerous. I panicked that they would flee immediately but after several moments she seemed to relax and she turned with her baby close behind and hopped slowly into the bushes and out of my sight. I turned to head back toward the lodge where we spent the night so I could have breakfast with my daughter, her husband, and his family. My wife would have liked Tasmania, those adorable miniature kangaroos and she would be proud of our daughter. 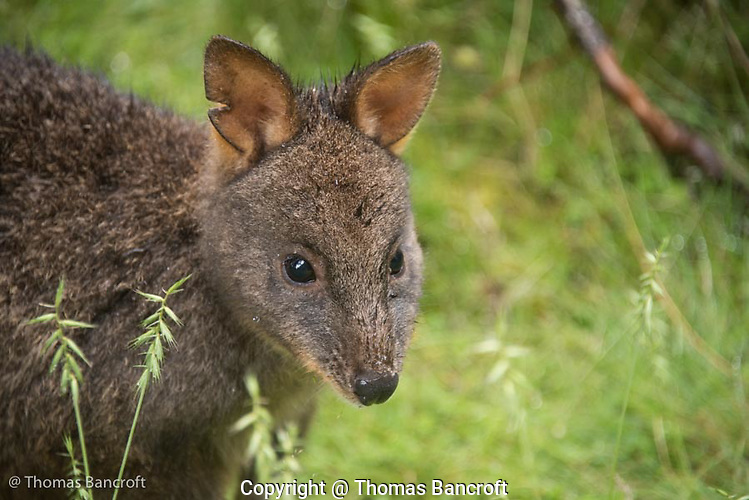 This blog was first posted on The Travel Writers site.

2 thoughts on “A Family Outing”