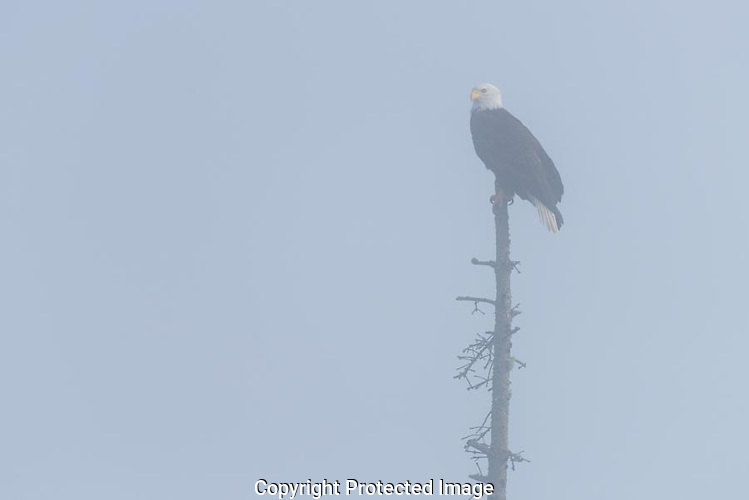 A bald eagle sits on top of a dead snag in dense fog on Whidbey Island in Washington. (Thomas Bancroft)

The fog created an eerie feeling to our walk on the beach. It wrapped around us like a winter quilt. I could feel the dampness on my cheeks, and the air tasted salty. We had come to North Whidbey Island to see what birds we might find. To our left, we could hear the rhythmic lapping of waves and to our right the fog completely obscured any view of vegetation at the beach’s edge. We wondered if we would see anything. I joked to my friend that a large bear, mountain lion, or marauding band of Vikings could suddenly appear out of the fog, and we would not have a chance to escape.

A weak, flat, whistle made us stop in our tracks. Initially, we could not pinpoint its direction, turning to look in all directions. The sound added to the eerie mood. We then heard 3 or 4 whistles at one-second intervals followed by 8 or 10 rapid whistles. Their tone varied, and it sounded almost as if the “beast” stuttered. The call puzzled me initially as I ran through all the possibilities that it might be. After a few more calls, my friend and I simultaneously said bald eagle.

We walked cautiously up the beach moving closer to the upper edge of the beach to see if we could see it. After 100 yards, we spotted the faint outline of the bird on top of a dead snag. The adult bald eagle continued to call through the fog. We wondered if it was trying to locate its mate. As we strolled by looking at it, the magnificent bird looked one direction down the beach and then the other. It totally ignored us on the beach. The bird’s magnificence caused us to stop for several minutes to watch the bird call and gaze through the fog. 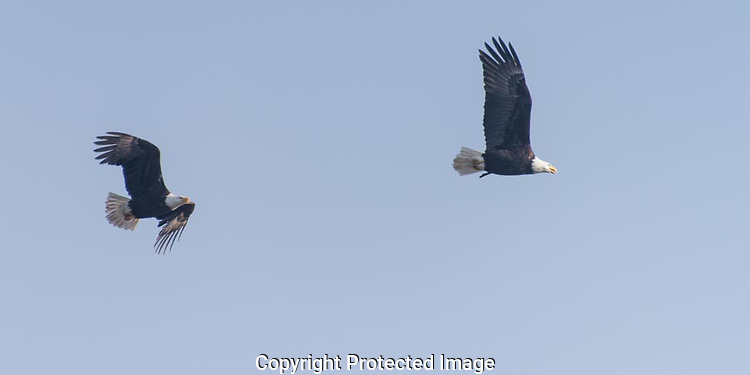 A pair of Bald Eagles fly along the beach on Whidbey Island calling to each other. (Thomas Bancroft)

Later the fog partially cleared and we watched a pair of adult bald eagles fly together along the beach, one slightly behind the other and both calling back and forth to each other. They made the shorebirds and the ducks extremely nervous. The shorebirds flushed and the ducks dove, but the eagles didn’t appear to be hunting. We wondered if one of these was the individual we saw earlier.

About a mile farther down the beach I heard something behind us and turned to watch a juvenile bald eagle fly out of the fog and by us on steady, powerful wing beats. A one-year-old bird, it still had black plumage on its belly and above its eye. The bird passed overhead, and we could see its large hooked bill and yellow legs and hear the beat of its wings.

A good day for eagles! 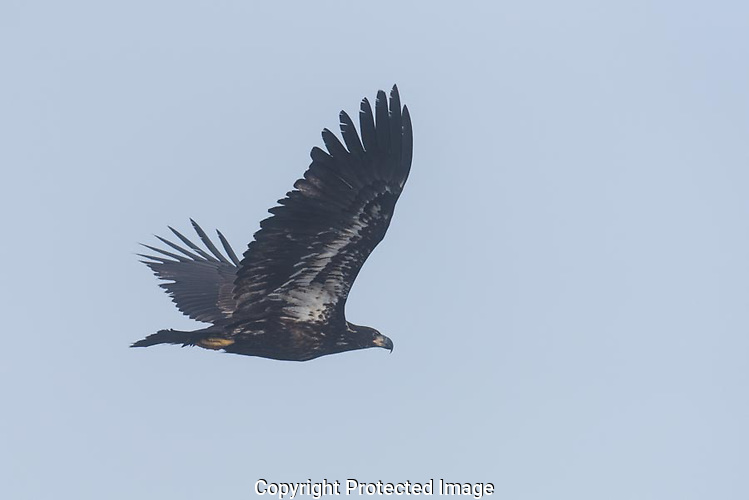 A juvenile bald eagle flies along the beach on Whidbey Island in Washington. (Thomas Bancroft)