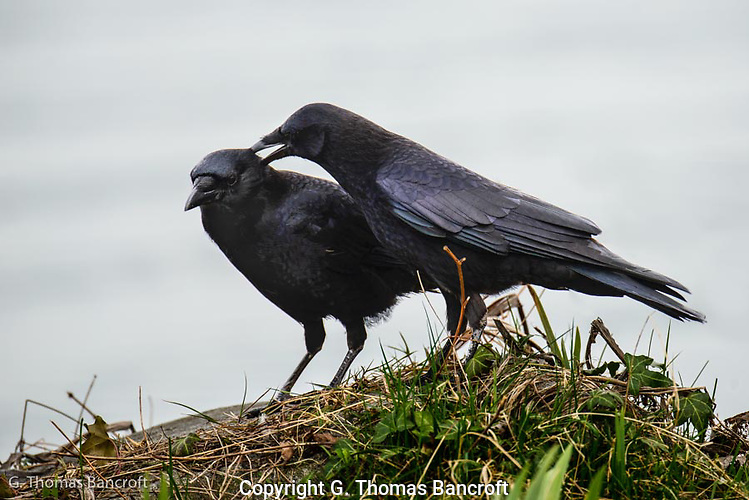 The crow walked up to its mate and began to preen indivudual feathers. This allopreening is important in building pair bond between the mates. (G. Thomas Bancroft) [Photographs are available as prints by clicking on the photo to go to www.thomasbancroft.com]

We have probably all looked at an American Crow flying by and said, “oh, it is just a crow.”  They are actually really interesting creatures.  They form long-term pair bonds.   Some populations breed cooperatively with young from previous years helping raise the next brood of young.  They have a very complex social system with related families often forming larger flocks during the non-breeding season. They are incredibly smart and can learn to recognize individual people and respond to them.  I sometime just like to sit and watch them to see what they are up to.

On Wednesday, I watched a pair of American Crows walking along the shoreline at Matthews Beach Park in Seattle.  This pair was only partially interested in feeding and seemed to have something else on their mind.   First one individual would approach the other and begin to preen the others feathers.  A few minutes later the other individual would begin preening the first.  This behaviour is known as allopreening and in crows is a behavior used in solidifying the pair pond.  One individual seemed slightly larger than the other and I assumed this was the male.  The sexes overlap in size but generally males are larger than females.  Over a 30-minute period they worked several hundred feet along the shoreline.  Stopping occasionally to pick things from the ground or along the shore.  At one point, the presumed male held some food in its bill and the female took it by twisting its neck almost upside down and softly picking it from the other.   I suspect the pair will nest in a tree in the vicinity of the park.  The pair flew off when someone walked down close to the shore.  Next time you see a crow, remember that they have complex behaviors and are quite fascinating socially. 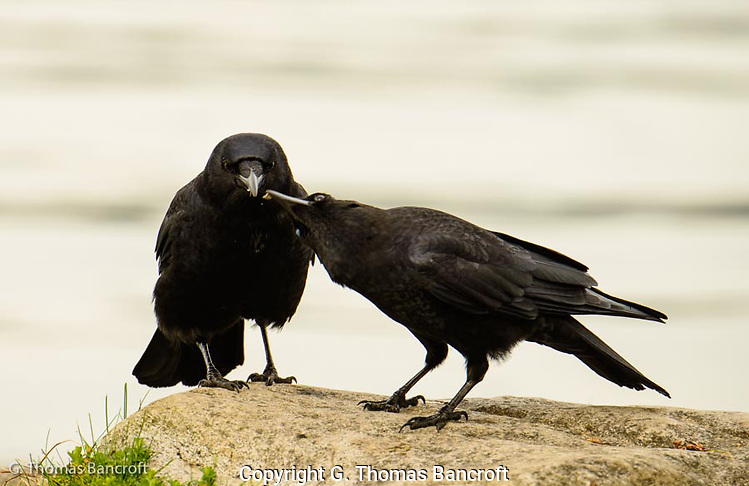 The one crow walked up from the shore with a morsel in its mouth and its mate twisted its head to take a piece from its mate. (G. Thomas Bancroft)