Winter must be a hard time for birds, especially ground feeding birds, when the snows are heavy and deep.  In February 2010, we had about two feet of snow all at once in the Washington, DC area.  It blanketed the neighborhood where I lived with a white coat of paint and buried the gardens in a thick white quilt.  Because our neighborhood had extensive gardens with many azaleas and other bushes it was an excellent wintering place for White-throated Sparrows and Dark-eyed Juncos.  Small flocks worked through the leaf litter looking for seeds and other food items.  These birds fly south to our area in central Maryland from more northern nesting areas.  Other birds, like Cardinals, Song Sparrows, and Morning Doves, were probably local birds that stay through the winter.  Now with deep snow across the landscape, they needed to find food above the snow because it was too deep for them to scratch through.

Fortunately, for them, many people including me feed birds in winter and I had many hanging around my house in the bushes searching for what they could find and searching around the feeder.  Many stayed in the yard after feeding because the thick bushes gave them protection from the snow, which was still falling and the wind.  I bundled up and went out to see what they were doing. 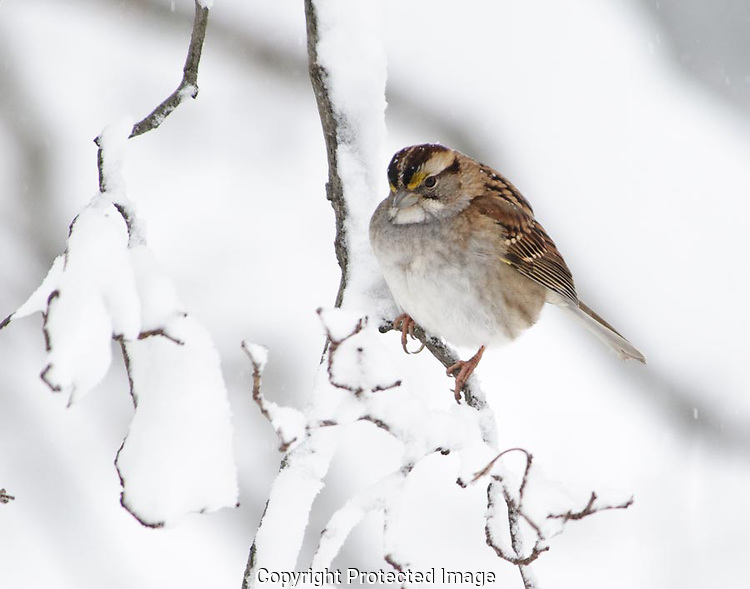 The snow was coming down heavily and the birds were actively looking for food. This sparrow landed on the branch knocking snow from it and waited to drop down into the feeding flock. (G.T. Bancroft)

I started out the back door when I noticed some white-throated sparrows scratching under the big azalea by the garage.  This azalea extended more than 10 feet tall and the snow wasn’t very deep under it.  Plus I had thrown some seeds under it before the snow started.  They had to work through a few inches of snow even under this dense bush.  Each sparrow would do two or three stationary hopping scratches with both feet to move snow and leaves and then look to see if they exposed any food.  There wasn’t much room so individuals kept chasing each other for prime spots. The little White-throated Sparrows had their feathers all puffed out to create a fluffy down coat around their bodies.  The interlocking barbules form an effective windbreak and by puffing their feathers they create a thick blanket.  These birds feed primarily on the ground by scratching in the leaf litter to find seeds or grubs.  I had thrown seeds under the azalea to give them extra chances.  We have two color forms, one with distinctive white line on the head and the other with buffy line.  They were quite active because they needed to find sufficient food to make it through the long night. 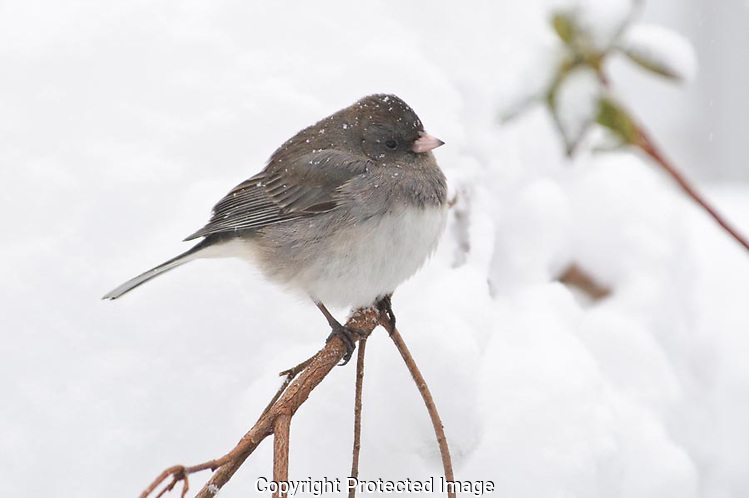 The junco had its fleathers fluffed to give it more insolation fromt he cold and the snow rested on its back withou melting. The bird didn’t seem to mind the snow and peacefully sat for several minutes. (G.T. Bancroft)

The Dark-eyed Juncos are so pretty with their black tuxedo coat, black tail with two outer white tail feathers that show so distinctively when they fly.  They seem to only come into my backyard when snow is on the ground and feed more out in the open than white-throated sparrows.  They seem to do fine without my help except in these difficult times.   Individual snowflakes rested on their backs without melting.  They didn’t seem to mind. 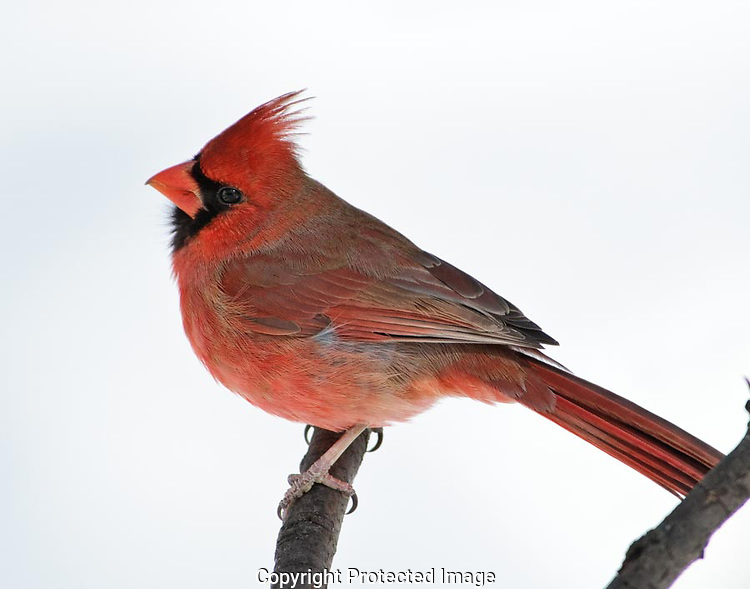 The cardinal cocked its head sideways. I couldn’t tell if it was worrying about something above or looking to the ground. The heavy snow could make a sneak attack by a hawk easier. (G.T. Bancroft)

Cardinals really stand out against the snow.  These are bigger than the previous species and displace them quickly at the feeder as well as the prime places under the bushes.  I found at least 6 individuals hanging around the yard at one time.  In winter, they become less territorial.  An individual would feed for a minute or two and then fly into a bush to rest and preen its feathers. 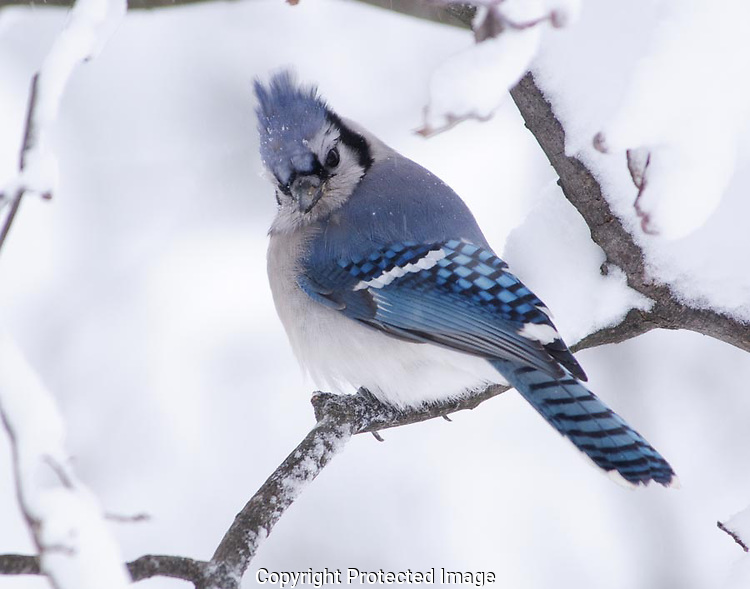 The blue jay was not happy that I was around. It glared at me over its shoulder in hopes that I would go back into the house so it could fly to the feeder. It had been snowing for more than a day and the birds were hungry for easy pickings. (G.T. Bancroft)

One of my favorite birds is the Blue Jay.  They come into the yard in a raucous flock, letting everyone know they are here and watch out.  They have a great personality and you can almost imagine what they are thinking.  I captured one looking over its shoulder at me and it sure looked to me that it was cross that I was in the yard when he thought he should have first pick.

The snow shut Silver Spring down for a few days while they cleared the roads.  A large branch came down from one of my neighbor’s trees and just missed taking out our electricity.  I had a few days off from work to enjoy the snow and seeing how the birds fared through it.  After it melted, I still had good numbers coming into my yard and in the neighborhood as I walked it suggesting many made it through this tough time.

You can see additional pictures in my winter yard bird portfolio.  Thanks for reading.