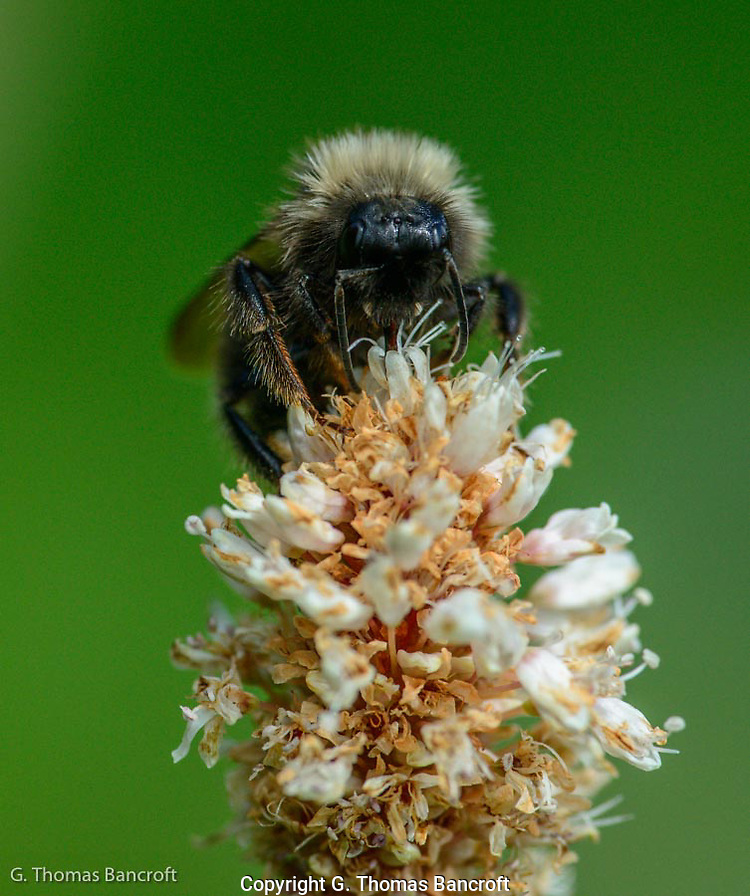 Western Bumblebee forages at the top of a flower. (G. Thomas Bancroft)

On August 24th, I hiked along the Pacific Crest Trail to the Glasses Lake overlook in the Henry M. Jackson Wilderness.  The lake was hourglass shaped and looked wonderful below the rock outcrop.  It was partially hidden by trees on the slope below the lookout.  Mist was falling, giving a soft look to the landscape.  Clouds came across the saddle to my left and drifted down over the lake.  You could see the ripples from rain droplets but you had to look really hard to see the rain, it was so fine. 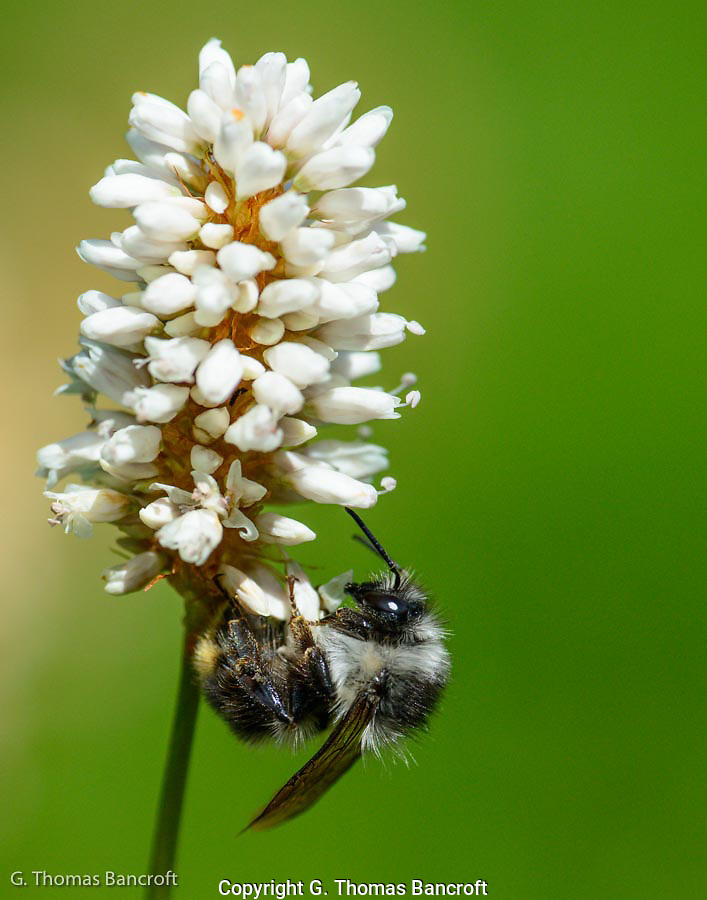 Fuzzy horned Bumblebee hangs from the bottom of a flower. (G. Thomas Bancroft)

Just before the overlook I spotted a large patch of flowers along the trail that was just loaded with bees.  After sitting awhile at the overlook, I hiked back to the flower patch to sit amongst the flowers and watch the bees.   Purple asters and a grass were in bloom.  The patch was a hundred feet long and on both sides of the trail.  Flowers stretched back a dozen or more feet from the trail.  Hundreds of bees were flying rapidly from one flower to another, generally checking a bloom quickly and moving on to another.  Occasionally, a bee would stay longer on a flower, really working hard over the flower, probing repeatedly into the blossom.  I can’t imagine that any of these flowers had much nectar left with the intense coverage.  I also spotted a syrphid fly.  This fly mimics a bee and initially gives you a startle when it lands on your arm.  When I looked closely, I knew it wasn’t a bee because it only had one pair of wings rather than the two pairs that bees have.   The competition for nectar was fierce and I suspect as soon as a plant produced new nectar, the first bee there would have it.   I was mesmerized watching the menagerie and listening to the symphony of buzzes.  I sat amongst them for more than an hour. 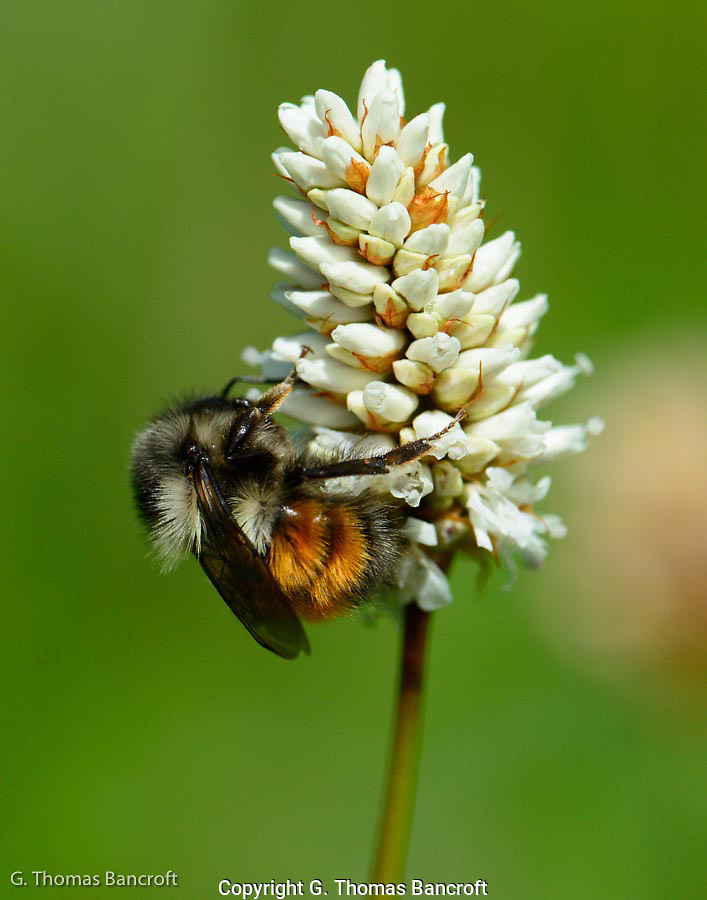 Bumblebees are really important pollinators for native plants, especially at higher elevations (5200 feet here).  We have a diversity of species and there were at least three species in this foraging congregation.  The species distribution varies with elevation and each species has different length tongues and mouthparts allowing different species to specialize on different shaped flowers.  They seemed to be generalist here and all going to the same flowers.  They have pollen sacks on their hind legs and sometimes you can see them carrying bundles of pollen.  I did not see any today, suggesting they were having a hard time finding pollen in these well-worked flowers.

A bumblebee queen hatches in early fall and overwinters in a hole it digs in the ground.  It then emerges in the spring and begins foraging while it looks for a suitable nest site in the ground, under a log, or other hiding place.  There it builds a wax nest, lays eggs, and begins to build a new colony.  Once the first workers hatch, the queen no longer forages but stays at the colony.  Colonies only last one year and then the cycle starts over again.

Keep you eyes out for bumblebees when you walk past flowers, they are wonderful and fascinating to watch and see.  I had to move from my trail seat to let two hikers pass.  They never paused to see the fascinating behaviors happening along their path.  It is something worth pausing to see. 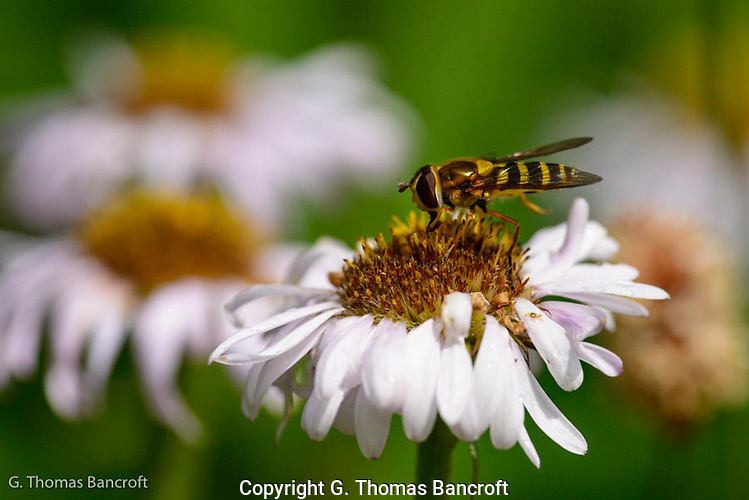 Syrphid Fly looks for pollen and nectar in an aster. (G. Thomas Bancroft)

One thought on “Bumble Bees in a flower patch along the Pacific Crest Trail in the Henry M. Jackson Wilderness”