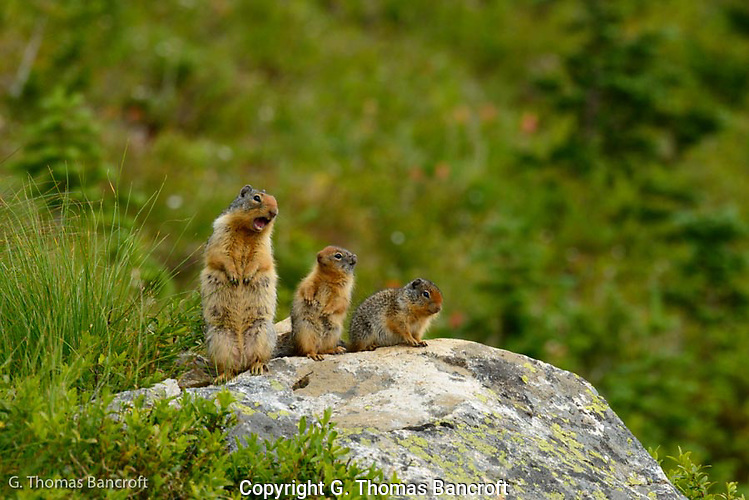 A family of Columbian Ground Squirrels came out on a rock to scold me as I hiked down the Pacific Crest Trail in Pasayten Wilderness Area. (G. Thomas Bancroft)

Rung across the meadow

I stop to look

It does not stop

For I am the danger

There, in the long grass

The head of a squirrel

Out on a rock pops another

Smaller than the first

Arrives on the rock

Three half size ones join Mum

One is shy and leaves

Two look to where the danger

One young rises on hindquarters

Where is the danger, Mum

I walk on down the path

Past the rock and meadow

Good day in the Pasayten Wilderness

I rounded a corner on the trail in the Pasayten Wilderness to hear a persistent “chirp chirp”.  It took me several minutes to locate from where the “chirping” was coming.  The mother was standing amongst thick grass, looking straight at me.  Three young kept coming out on a rock, looking around and then scurrying back into the bush.  After about 5 minutes the mother, hurried down to the rock where she took up an upright stand and continued the “chirp chirp”.  The young joined her but appeared to not recognize me as a danger.  They kept looking around and staring at the mother.  It was great to watch.

One thought on “Columbian Ground Squirrel in Pasayten Wilderness”