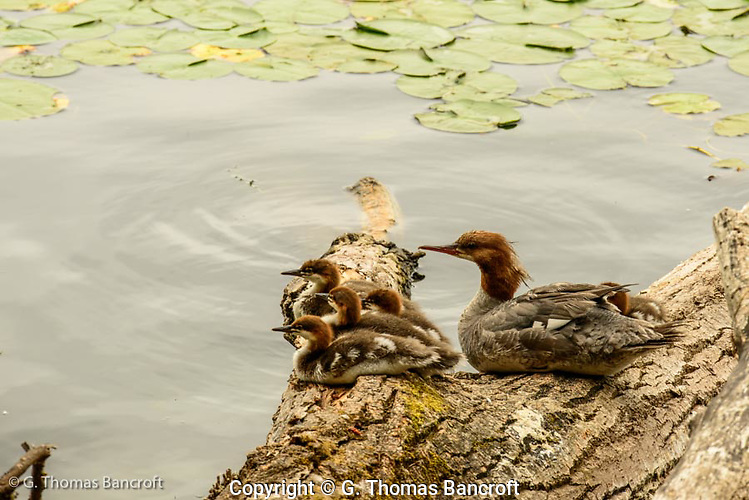 Family of Common Mergansers on a log at Seward Park. (G. Thomas Bancroft)

At Seward Park, I spotted a family of Common Mergansers along the shore of Andrews Bay in Lake Washington. The female duck had her brood resting on a log. For ten minutes she preened her wings and back feathers by taking individual feathers in her serrated bill and pulling them through her bill to straighten barbules and align feathers with adjacent feathers. All birds need to maintain the water proofing on their feathers so water doesn’t soak into to their skin.  For ducks this is especially important because they spend so much time in water. If water makes it through the plumage to their skin, a duck will suffer hypothermia and if not solved, wet skin usually results in death. They waterproof feathers by coating them with oil from the uropygial gland at the base of the tail. The oil contains diester waxes that help waterproof as well as keeping feathers flexible. All birds spend substantial time caring for their feathers.

While I watched, the female and young slept by tucking their heads along their back feathers and sometimes their bill under wing feathers. They were quick to wake-up and look around if they sensed danger. One young squeaked once at something and all became alter and looked around to be sure nothing was approaching. One young peered carefully into the sky, its head cocked to the side, but I could not see anything when I looked. Bald eagles will feed on ducks and two pairs of eagles nest at Seward Park. The ducklings closed their eyes so I guess they didn’t feel an eagle was patrolling at that moment.

Common Mergansers nest in tree cavities where they lay a dozen or so eggs. The young leave the nest soon after all have hatched. They jump from the cavity, falling to the ground where their body acts like a ball and they bounce unhurt. The mother gathers the young and heads to the water. For the first week or two, the young feed on caddis flies, mayflies, dragonflies and other aquatic insects. When about two weeks old, they begin to pursue and eat small fish. Adult mergansers feed primarily on fish and chase them under water, twisting and turning with the fish until they capture it.

I watched the family for 20 minutes before moving on down shore loop road. My heartbeat increases when I find something as exciting and interesting at this. It is great that some species successfully nest and prosper in a city landscape. This female had five half grown babies accompanying her. Outstanding.