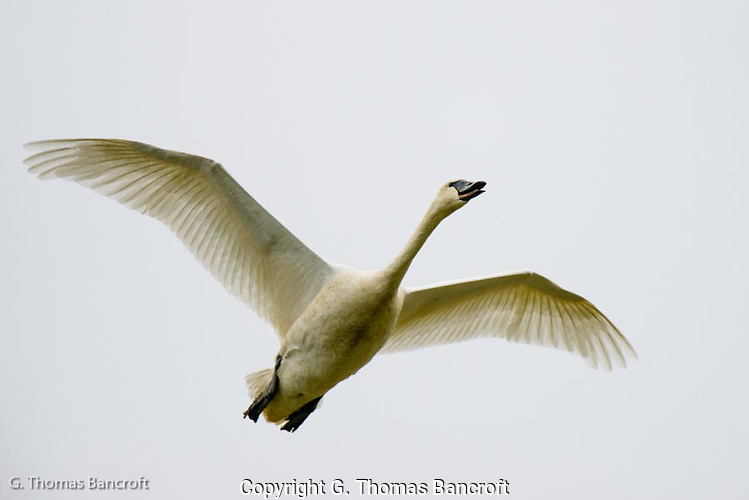 The Tundra Swan took off away from me and then circled back around and flew right over me. I was able to enjoy the beauty and grace of its flight as it climbed up from the field and headed off. Watching the athletic ability of this bird helps one appreciate why swans are considered so wonderful. (G. Thomas Bancroft)

Did you every wish you could fly?  When I was young, I use to imagine what it would be like to fly and look down at the forests and valleys of Pennsylvania.  I had the chance to do aerial surveys in a small plane for wading birds across Florida in the 1980s and 1990s and was always thrilled to be able to see the natural landscape from the air.  Oh, to be a bird and be able to fly!

Birds have many adaptations to be able to fly.  Air sacs in the body cavity help increase their respiratory efficiency and replace fluids with air, helping to reduce their weight compared to a similar size mammal.  Their bones are hollow, also reducing weight, and their front limbs have been modified into wings.

There are many similarities in their wings to our arms.  Like mammals, they have a humerus, upper arm, and ulna and radius, forearm.  The hand is highly modified with reduced number of bones from ours and many fused bones to form what is known as the manus. The flight feathers known as the primaries are attached to the manus and this outer part of the wing provides the power when birds flap down.  The secondaries, additional flight feathers, are attached to the ulna and this part of the wing provides the lift.  Coverts cover the bases of the flight feathers and additional feathers cover the rest of the wing surface.  These feathers help make the wing very aerial dynamic.  Individual primaries can be twisted during certain maneuvers to provide control.  The tail is also critical for flight in helping with stability and direction.  So to put it in human terms, flapping your hand provides the power for flight and your forearm provides the lift, the upper arm is important in putting the other two components in the right place.  The power muscles for flight in birds, both down stroke and up stroke, are attached to the breastbone and connected by tendons to the wings.  The breast meat on a chicken or turkey are these flight muscles.

The Tundra Swan is gaining altitude in this picture.  The wrist is about two-thirds out on the wing; the primaries are off the manus out from the wrist.  Secondaries extend behind the wing between the humerus and the wrist.  The translucent nature of the flight feathers allows you to see the rows of coverts (small feathers) at the base of the flight feathers both on the top and bottom of the wing.

The Bald Eagle is going through a rapid turn.  The outer primaries on its left wing are slightly twisted to allow airflow between them.  You can see the details of the coverts and small wing feathers on the top of the right wing.

The Snow Geese are coming into land in a field.  The wings are held far back and are being used to slow the birds down.  Notice on the front edge of their right wing in front of the primaries is a small feather that sticks out a little.  This is known as the alula and is thought to be critical in preventing birds from stalling as they slow down for landing.

A flying bird is incredibly agile and graceful thing.  As I took these pictures, I could not help but stand in aw of these birds in flight.  Next time you see a bird fly by, think about what it would be like to fly and how birds have evolved to be able to fly so well. 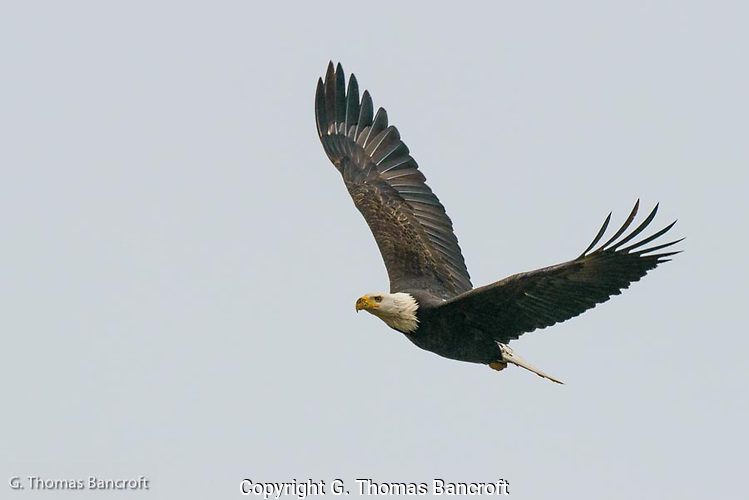 The Bald Eagle suddenly turned hard to its left and crossed in front of us. We could see the power of its flight and its expression appeared almost serious. Mud seemed to be on its bill and its eyes looked straight forward. Its body arched as it sharply banked in the turn. (G. Thomas Bancroft) 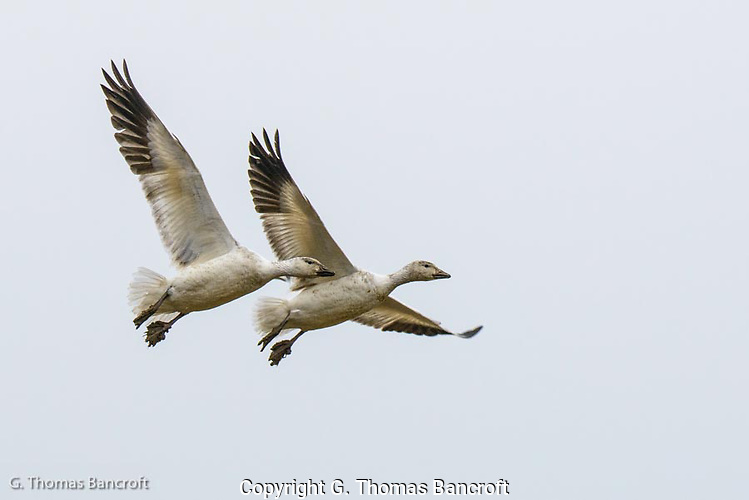 The Snow Geese pair spread their wings to begin to slow themselves down as they descended to land amongst other geese. They dropped their feet and spread their toes to give additional drag. When they touched the ground, it was as if they had gently stepped onto the grass; as graceful as an Olympic gymnast. (G. Thomas Bancroft)