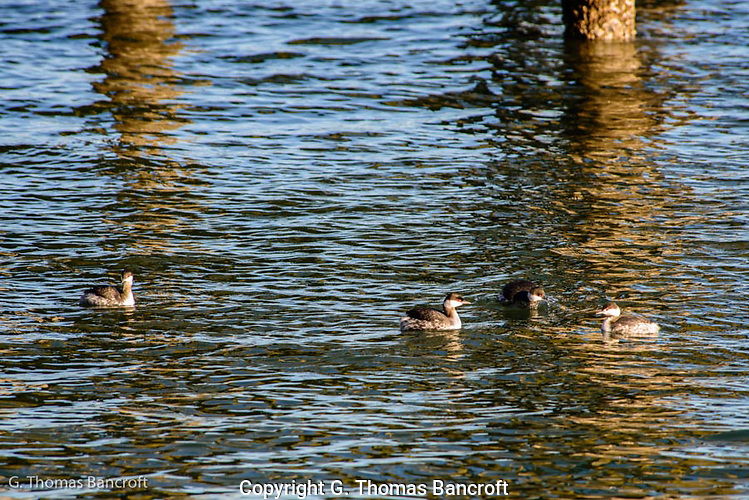 A couple of weeks ago, I was up on Whidbey Island and stopped by the marina in Langley.  It is a small marina and if the clouds are high has a wonderful view across the sound to Mt Baker and the Cascades.  The mountain was out today and stood brightly on the morning horizon.  I found several horned grebes lazily floating on the waters in the marina, seemingly to be just enjoying the sun.  They definitely weren’t working very hard looking for food at 10:30 in the morning.  Occasionally one would dive and be below the surface for almost a minute at a time.  When they surfaced with a small fish in their mouth, I knew they had a successful dive.  In winter they search for small fish and crustaceans, often swallowing the prey underwater.  I suspected they were pretty full after spending more time foraging earlier.  A small group of Barrow’s Goldeneyes swam into view from the right.  The adult male had its distinctive black and white pattern.  The crescent moon shaped oval white patch behind the bill being easily seen from a great distance.  The female is more camouflaged with brown and muddy white patches.  A first-year male was not as distinctive as the adult male.  They swam lazily around several piers taking quick bites at mussels or barnacles at the surface.  I saw one dive briefly but they definitely weren’t actively foraging at this point.  I was surprised to see an adult male Common Goldeneye swim into the group of grebes.   I usually see this species in freshwater habitat because it winters all across continental United States.  These birds breed in the boreal forest of Canada and Alaska as well as the boreal forests of Eurasia.  In winter, they feed on small fish, crustacean and mollusks.  The green head and yellow eye stood out in the morning sun as the bird drifted through the grebe flock.

The sun created a dynamic colored reflection of the dock in the rippling waters.  The birds among this pattern were mesmerizing.  I watched the flock for half an hour before I needed to jump back in my car and head down the road. 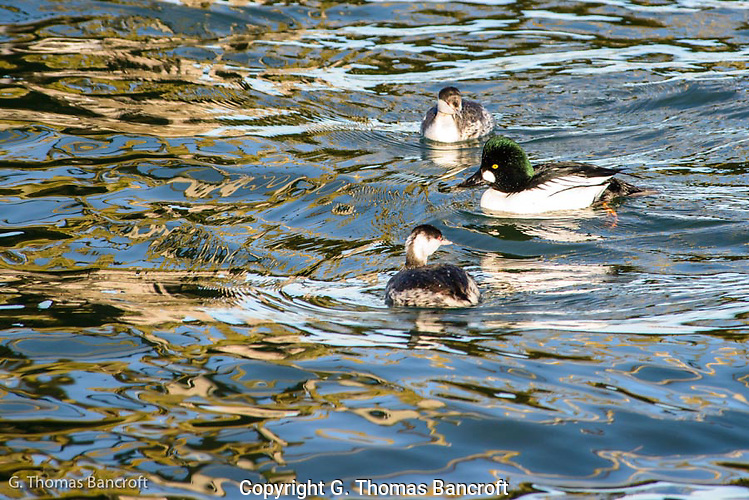 An adult common goldeneye swims between two horned grebes and into a goldend reflection on the water. (G. Thomas Bancroft)