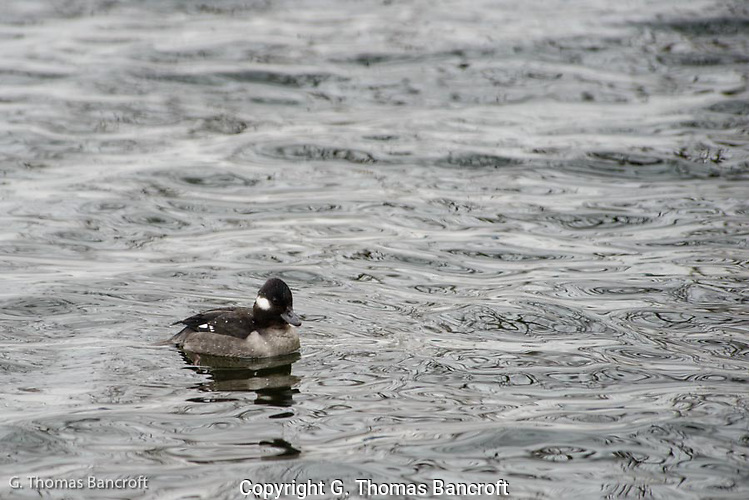 The female bufflehead surfaced from a dive. A few water droplets stayed on her back as she rested a few seconds before her next dive. (G. Thomas Bancroft)

The sun had just risen above the horizon at Green Lake and was peaking through some slits in the otherwise solid cloud cover.  The light reflected off the rippling surface of the lake and the clouds created a dramatic reflection.   The air was crisp, with the temperature just above freezing.  The ducks and coots were still actively feeding along the shallows.  A female bufflehead dove repeatedly along the shore.  She would surface for a few seconds and then pushing hard down with her tail, she would leap up into the air with great energy to start her dive.  Her tail feathers spread to create a good rudder as she pursues underwater prey.  Buffleheads are the smallest of North America’s diving ducks and generally feed in water less than 10 feet deep.  Several pied-billed grebes were also actively feeding.  They stayed on the surface for only a few seconds between dives and would often pop back up 50 or more feet from where they dove.  These birds are pursuing small fish.

By an hour after sunrise, some ducks were coming to roost along the shore having found sufficient food for a while.  I watched three shovelers preening and taking a quick bath.  They would fluff their feathers and throw water across their backs by dipping their heads into the water.  One sat on a log, working to preen individual feathers, straightening out shafts and recoating feathers with oil to keep them waterproof.  It is amazing that something as delicate as a feather can create a waterproof coating for a bird allowing them to swim and be dry and warm.  Even a small amount of water on the skin can quickly cause a bird to become hypothermic and die that is why oil spills are so dangerous for birds.   A female shoveler having finished both feeding and preening had found a good resting place on a branch over the water.  She had her bill tucked under her scapular feathers and seemed to be resting contently.  Once when a dog barked briefly she pulled her head out for a quick look around.  Deciding that nothing was serious, she stuck her bill back under her feathers and seemed to go back to sleep. 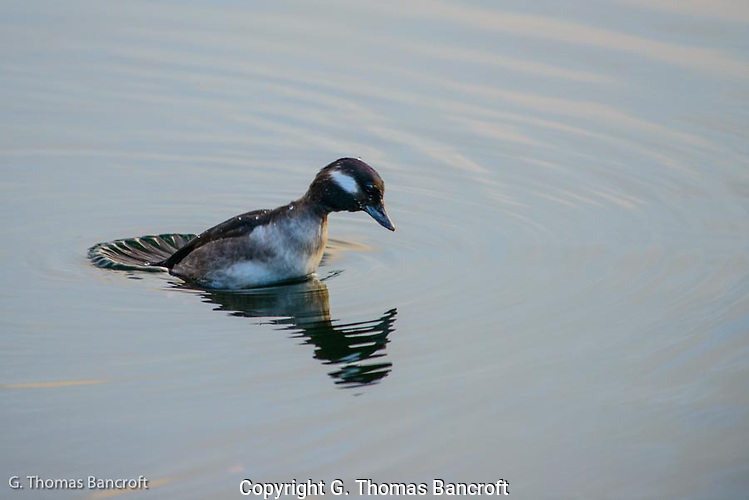 The Bufflehead sat on the surface for a few seconds after she poped up from her last dive. I watched carefully as she prepared to dive and noticed that she spreads her tail as a large paddle and pusing hard down to propel her up and straight down on a dive. (G. Thomas Bancroft) 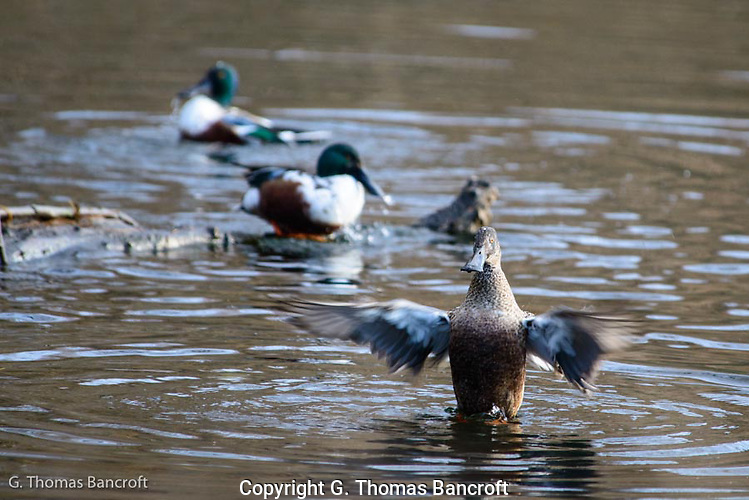 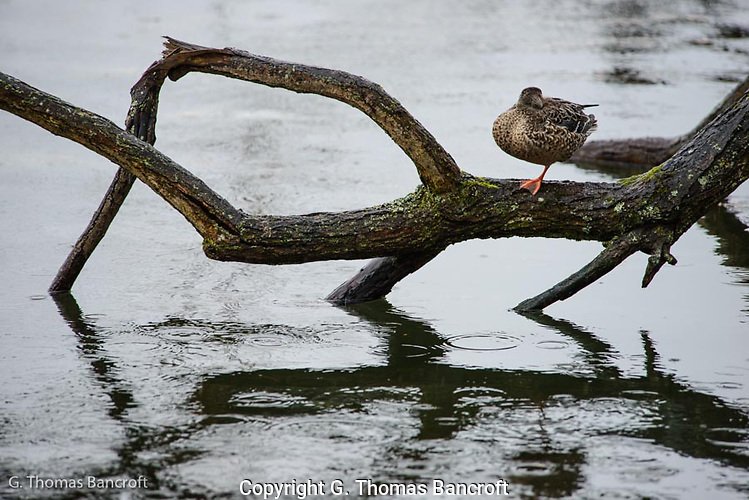 The pattern formed by the branches extending down into the water was fascinating and the female shoeveler sleeping on one foot added an interesting element to the picture. (G. Thomas Bancroft)

The high pitch whistle of the American widgeon caught my attention and I looked around to see where it came from.  I discovered more than a hundred widgeons foraging on the lawn as if the mass was a giant mowing machine.  They flowed left and right along the grass as one bird or another changed direction.  Occasionally, an individual would fly into the center of the flock and disrupt everyone’s concentration on foraging.  A runner caused them to shift direction back toward the water with a few individuals leap frogging over the mass.  I wonder how much grass they consume in the morning. 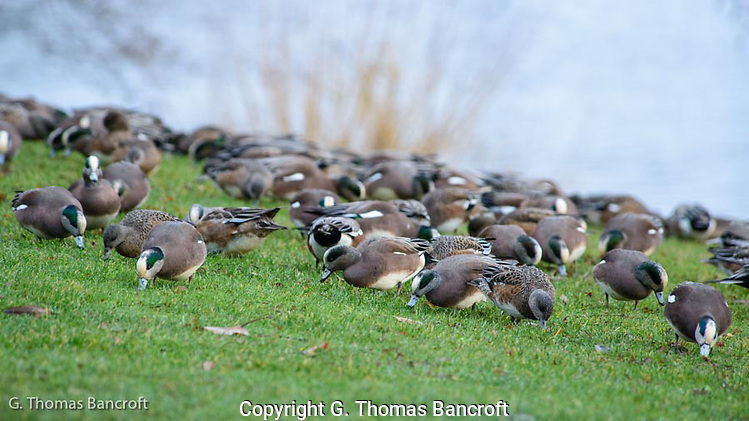 The mass moved one way and then another almost as if all the individuals were connected by a magical cord. (G. Thomas Bancroft)

Just before the parking lot, I heard the chip of two Bewick’s wrens and discovered them foraging at the base of a pine tree.  They were hoping up along the bark of the tree picking at things in the bark and flipping needles around the base of the three.  A flock of 30 robins were scattered under the pines looking for worms and grubs.  Staying in numbers was providing more eyes to warn the group of approaching predators.  The robins were actively running along the ground, stopping, and cocking their heads as they looked for food. 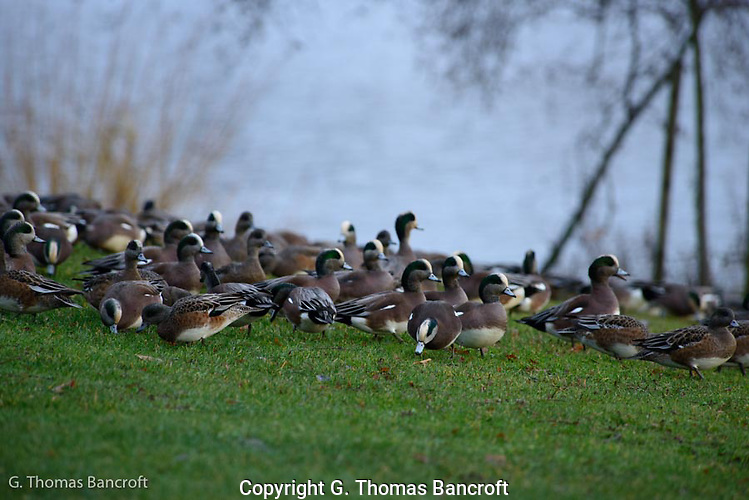 Something startled the feeding flock causing them to raise their heads and excitedly whistle. I looked to see if an eagle or hawk was near by or whether it was a passing dog. I could not tell and the flock went back to feeding in a few seconds indicating they did not feel it was serious. (G. Thomas Bancroft)

As I climbed back into my car, a few large snowflakes were falling with the light rain; a wonderful morning to be out.