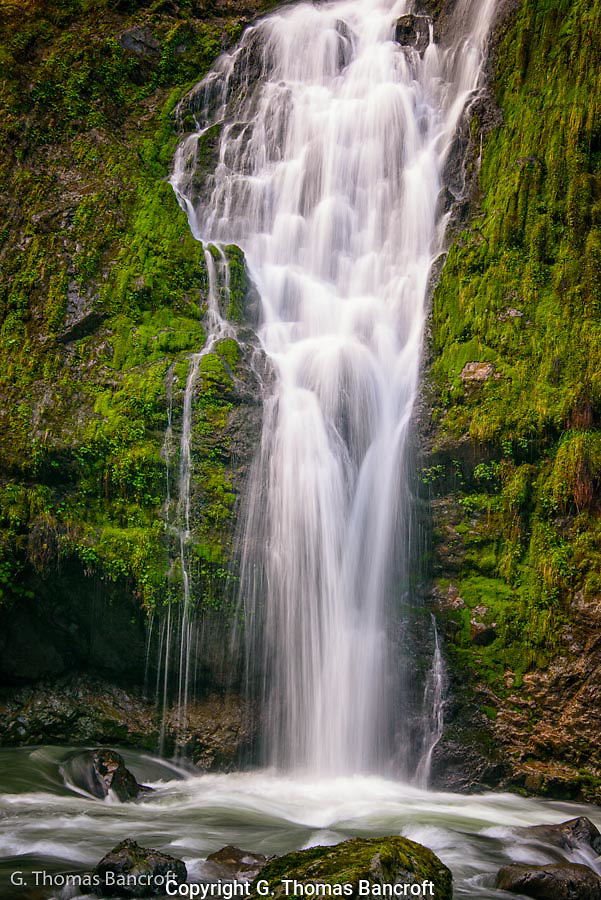 The water tumbles over a series of rocks as it comes down the falls in the Boulder River Wilderness Area. I liked the texture of this photograph and how it makes both the water and moss covered rocks glow. (G. Thomas Bancroft)

The Boulder River Wilderness is nestled in the mountain just east of Arlington, Washington.  I arrived a little before 6AM to hike the trail into the wilderness.  The sun was cresting the tops of the mountains but it would be awhile before it reached the valley.  I was hoping to see the landscape in the soft pre-sun light. 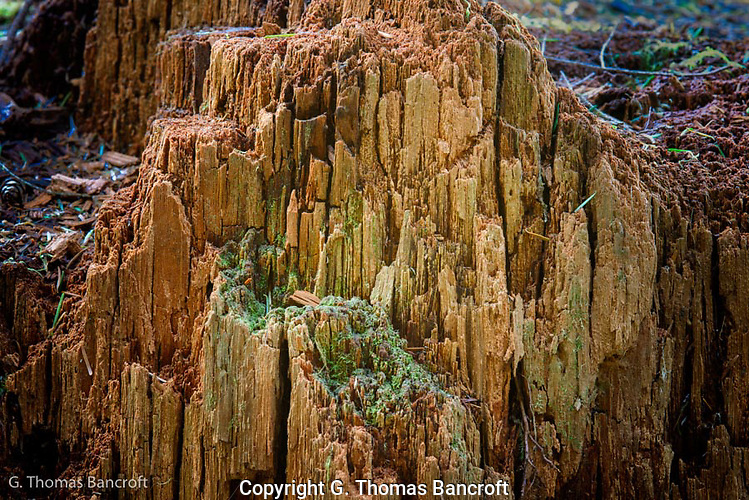 The wood of an old cedar stump is so rich in colores and tectures. Notice the subtle variation across the wood. (G. Thomas Bancroft)

The trail travels through a Douglas Fir, Western Hemlock and Cedar forest.  One passes the wilderness boundary after about a mile and the trees become much bigger.  Numerous individuals were about 4 or more feet in diameter and rose more than 100 feet into the sky.  Branches were draped in mosses and lichens creating a very pleasant cathedral to walk through.  Several large cedar trunks were decaying on the ground.  The red wood was incredible to study, its texture and subtle colors were wonderful

All through the hike I was serenaded by the Pacific version of the Winter Wren.  Their song is this long series of melodious notes and trills, often with more than 36 notes per second.   This bird is only 4” long and weighs only a third of an ounce yet it blasts out this incredible song and does it almost continuously at this time of year.  By weight, the power of their song is more than 10 times that of a rooster!  Several places I sat looking for one that seemed to be right on the trail and was never able to actually spot him.  They spend their time down in the underbrush and being rufous brown with dark barring they blend in perfectly in the dapple light of the forest floor. 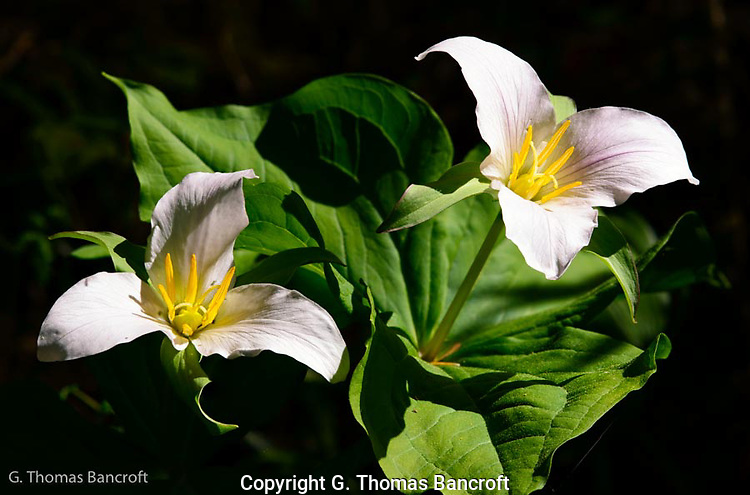 The trillium flowers were starting to show pink, indicating they they were almost finished blooming. I loved how the stamines shinned brigh yellow in the sun, just waiting to share there pollen. (G. Thomas Bancroft) 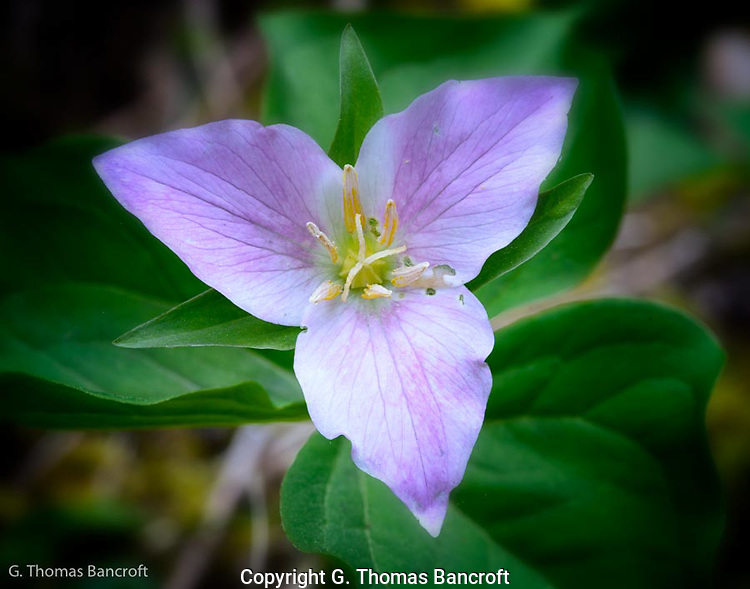 The trillium flower waved slowly in the light breeze. Something had taken a few bits out of the pedals in a few places. Notice how distinctive the veins are in the pedals. (G. Thomas Bancroft) 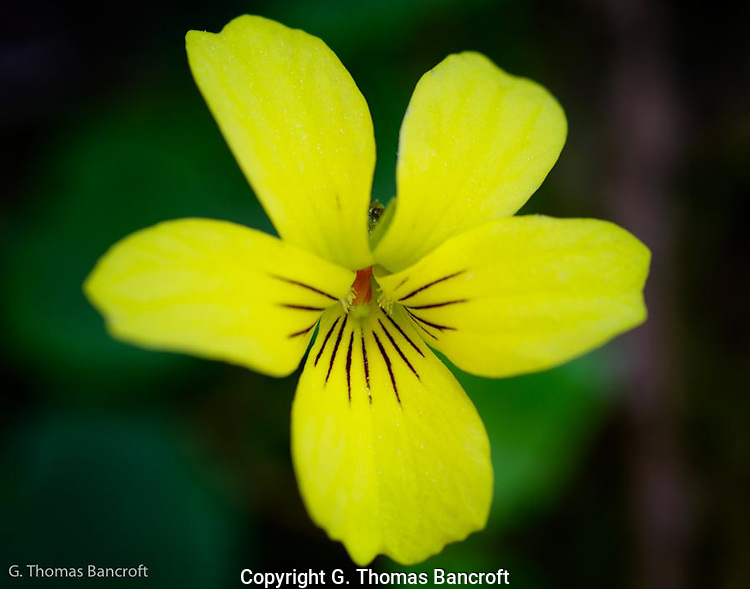 The Yellow Violets were blooming along the trail into Boulder Creek Wilderness. In several places they carpeted the ground. (G. Thomas Bancroft) 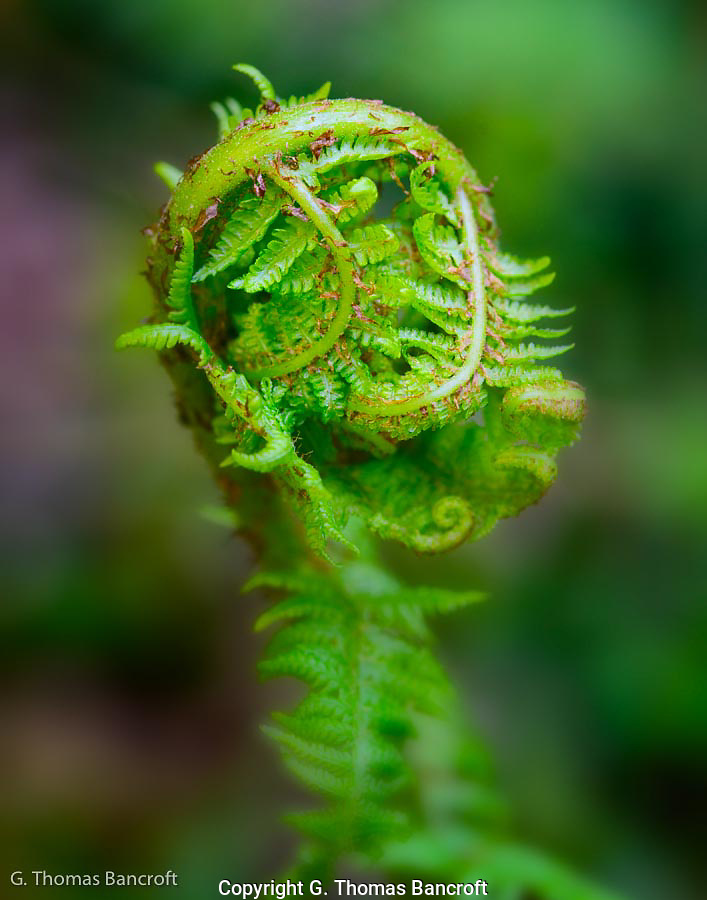 New fern fronds were beginning to open. They are so delicate when in this fiddlehead stage and fun to study closely. (G. Thomas Bancroft)

The wildflowers were wonderful.  Trilliums were still blooming; many starting to show pink in the pedals indicating that they were about done.  Yellow violets were abundant all along the trail.  The Pacific bleeding hearts were almost done, many were withered but I found a few still looking spectacular. 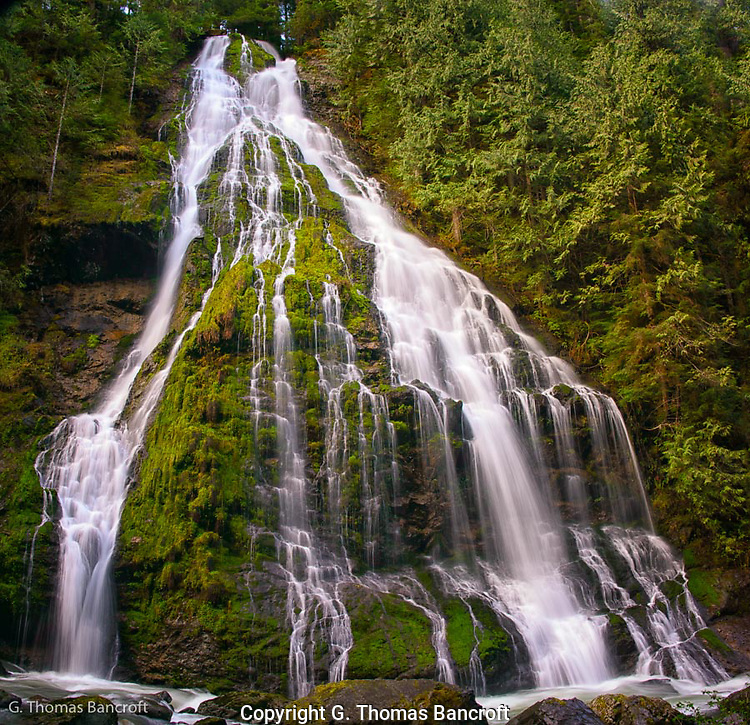 The water tumbles down two main courses on this falls and each goes through a series of divides as the water bounces off a succession of rocks. Watching the water creates a very serene feeling and I could have sat there for much of the day watching and relaxing. (G. Thomas Bancroft)

A little over a mile into the hike, two waterfalls are along the right side of the valley.  It was mesmerizing to watch the water tumble down the cliff side and splash into the stream at the bottom.  I worked my way down to the base of the larger falls so I could sit and enjoy the serene setting.   With the snowmelt, a lot of water is coming over the falls.  The larger waterfall has two main courses down the cliff and a lot of smaller ones.

Here is a video of the water tumbling down and the sounds of the falls in action.  Let me know what you think?  This is a wonderful hike to take and a chance to enjoy the wonderful wildness of the Pacific Northwest.