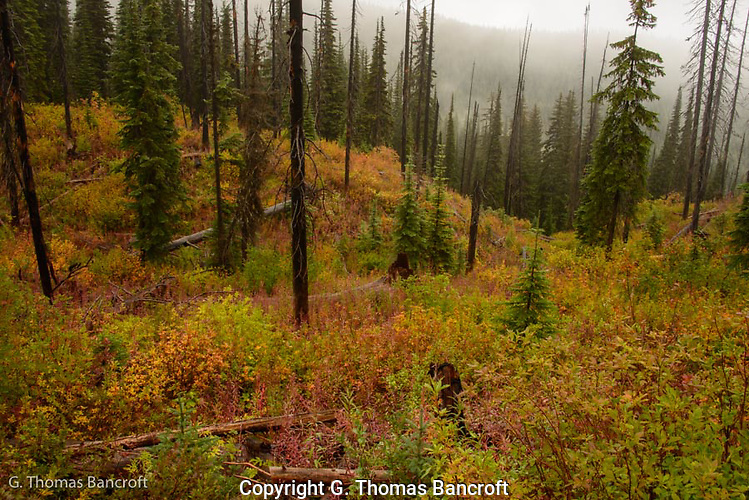 Fall colors were coming to the fire burn area on the slopes of Round Top Mountain in the Salmo-Priest Wilderness. (G. Thomas Bancroft)

17-18 September: I arrived at Pass Creek Pass at 6:15 P.M. and quickly put on my pack to hike into the Salmo-Priest Wilderness. The Shedroof Divide Trail starts along a one-lane Forest Service road and begins climbing immediately toward the ridgeline and Round Top Mountain. The Salmo-Priest Wilderness lies in the northeast corner of Washington. The inverted U-shaped wilderness hugs two ridges in the Selkrick Mountains and provides important habitat for grizzly bears and woodland caribou. It abuts a large roadless area in Idaho that currently is being managed as wilderness. Additional wild habitat is protected just across the border in Canada.  The Selkrick Mountains are built on Precambrian sedimentary rocks, 600 million years old, and some of the oldest rock in Washington.  Hundreds of millions of years ago, this had been the western edge of the continent.

I traveled first through an area that had burned a number of years ago. Young subalpine firs grew among thick clumps of fireweeds, huckleberries, blueberries and mountain ash. A few dead snags still remained as well as some firs that survived the fire. Based on the size of new trees, I suspect the fire was about a decade ago. Rain showers occurred on and off, everything was dripping. I watched a flock of robins drop down into the bushes, disappear for a few minutes and then fly to a new clump.  I suspected they were eating blueberries. I heard some thunder to the west but did not see any lightning.  Just in case it came closer, I headed back down the trail to be out of this open area. I arrived back to my camp at dark and as the rain became heavy and constant. 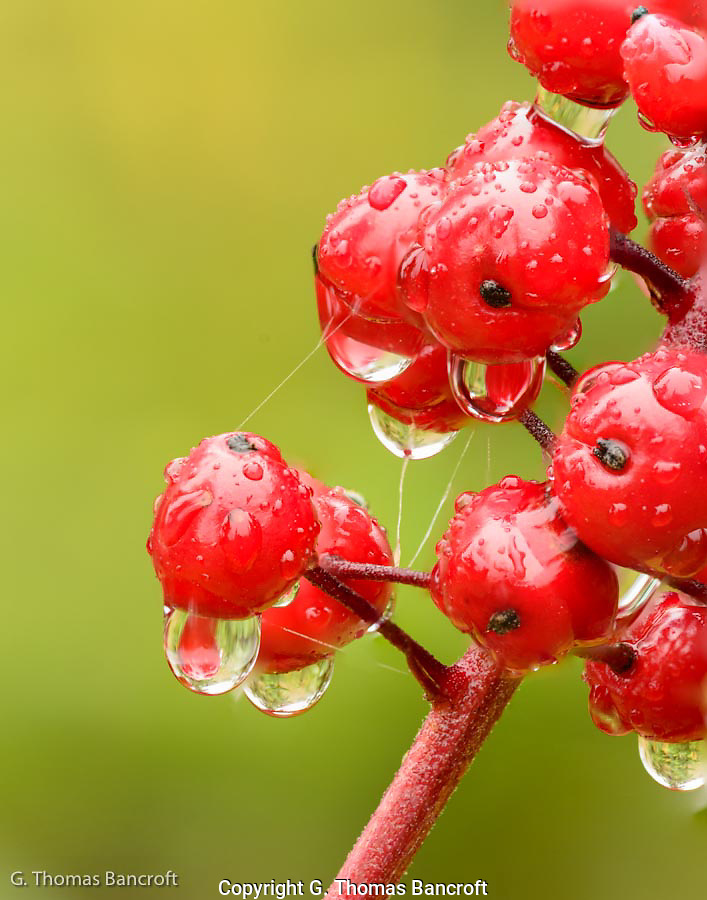 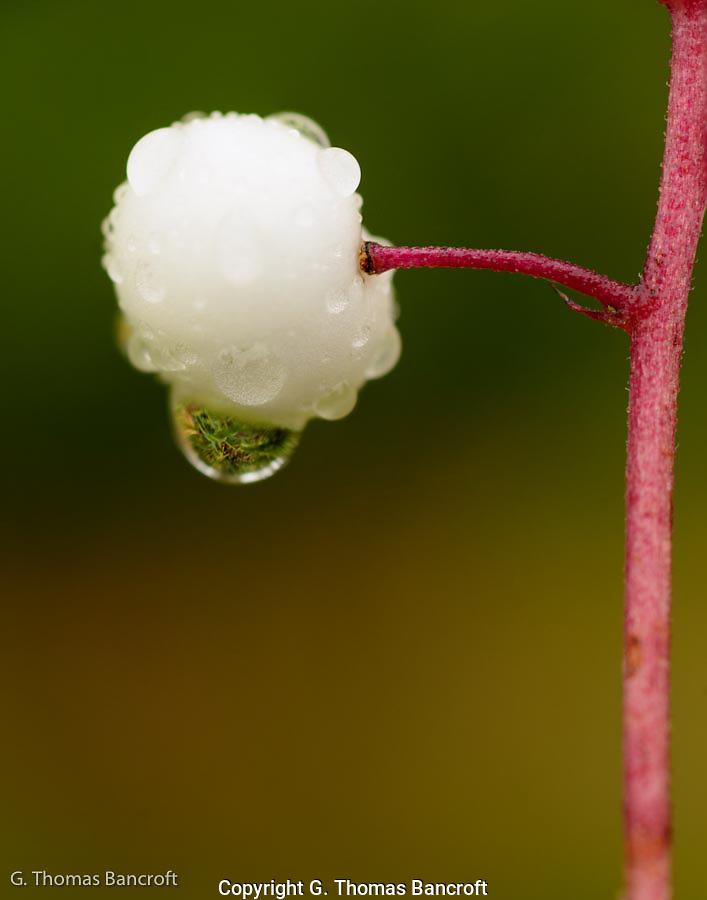 A large waterdroplet on the white baneberry reflected the vegetation along the slope. (G. Thomas Bancroft)

I woke at 6:30 A.M. to steady rain and pea soup fog. The fog rolled in and out, creating an eerie feeling to this remote place. I waited until 9 A.M. to head up the trail when the rain began to subside. Water droplets clung to leaves, needles and fruit. After passing through the burn, I entered a forest of subalpine firs, lodgepole pines, and Engelmann spruce. A hairy woodpecker tapped on a tree and I flushed a grouse as I moved through the forest. Waves of fog drifted up the valley from the east and over the ridge, at times blocking my views in all direction. A bald surrounds Round Top Mountain and the trail hugged the steep slope along the east side. Golden grass covered the bald.  Winds had increased to 20 mph and I heard a loud crack as a tree broke in the forest behind me. On the north side of the bald, I descended back into a forest and onto the west side of Shedroof Divide. I flushed a few Oregon juncos as I moved through the forest. Even with the fog, I found the views breath taking.  The forest smelled fresh in the mist and the vegetation looked vibrant. I drifted into harmony with the surroundings and walked for several hours in contemplation.  After awhile, I turned around to head back to the trailhead. 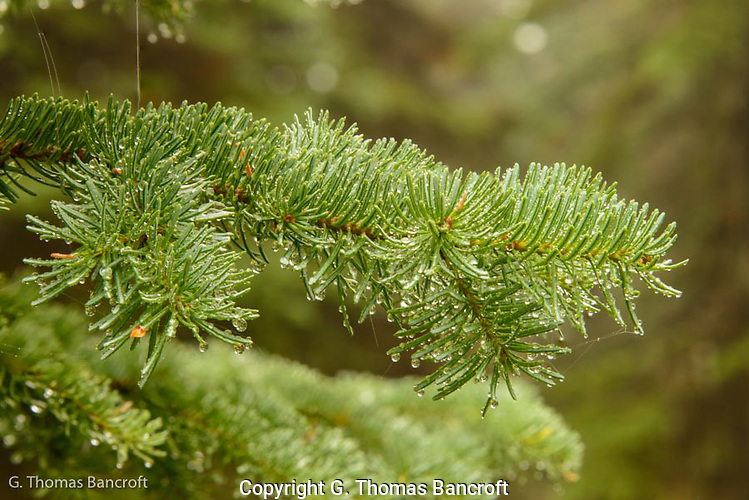 The rain coated all the vegetation with fascinating droplets. This subalpine fir glistened in the soft foggy light. (G. Thomas Bancroft) 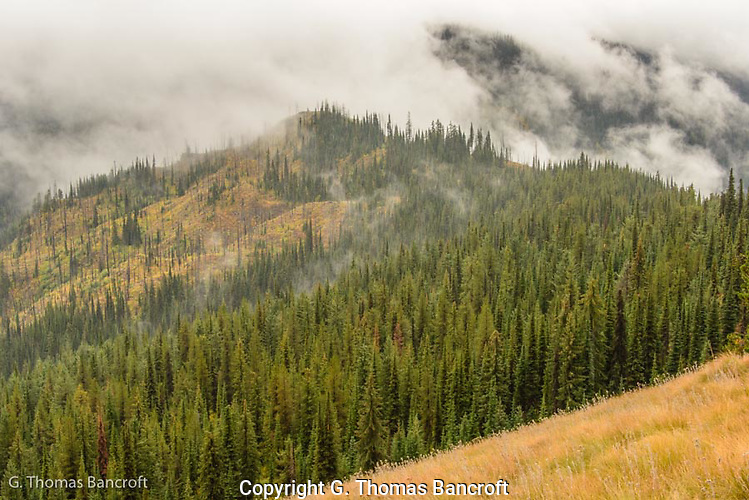 The fog moved across Shedroof divide in serene waves obscuring and reveiling the landscape. Fire a decade ago burned part of the mountain. (G. Thomas Bancroft) 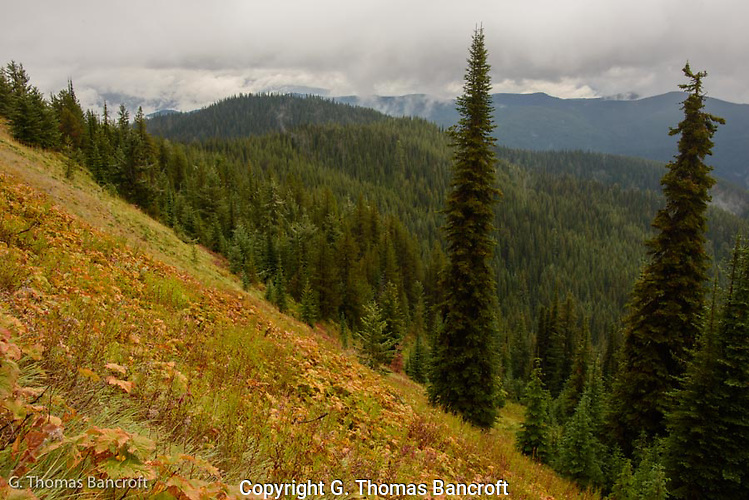 The steep sides of Round Top Mountain (6466 ft) are covered in meadows and allowed clear views north along Shedroof Divide into the Salmo-Priest Wilderness. (G. Thomas Bancroft)