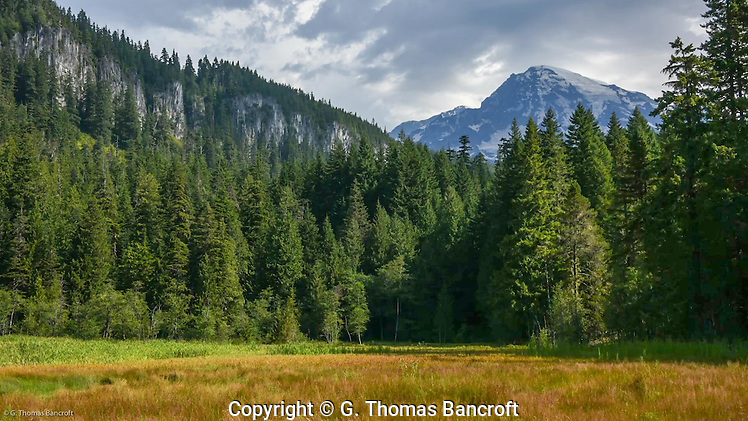 I stand in Longmire Meadows looking up the valley toward Mt Rainier first simply enjoying the life here in the valley and the wonder of Mt Rainier towering into the sky. I then try to imagine 1200 feet of ice on top of me and this meadow. I had just seen two mule deer browsing through the horsetail meadow under the alders behind me and I watched a flock of 20 band-tailed pigeons roost in some trees along the edge of the meadow. They flew down to the grass to feed before returning to the branches above. For me, seeing these pigeons was a treat for their numbers have plummeted in the last few decades and finding them is now hard. A dozen barn swallows swished back and forth across the meadow-grabbing insects. Their flight seemed almost effortless and so acrobatic. Hemlock forests lined the side of the meadows in a lush thicket like large pillows surrounding a quilted meadow.

Yet 375,000 years ago, this meadow would have been buried under ice and about that time Mt Rainier erupted, sending molten rock flowing down the side of the mountain. The lava flowed along the edge of the glacier until it came against an ice dam formed where the Nisqually Glacier met the Kautz Glacier. Imagine, a 1200-foot high ice dam. This damn would have been about the height of the emperor state building in New York or twice the height of the Space Needle in Seattle. Imagine that much ice.

I see Rampart Ridge rising 1200-foot at the edge of Longmire Meadow, its vertical basalt columns creating a sheer cliff. To think, this ridge right in front of me once was a lava lake, that entire side of the ridge liquid rock. Scary, maybe awesome. The lava flowed along the edge of the ice, meeting the ice dam, began to back up, filling the lake to the top of the glacier dam. The lava cooled first along the ice. After the eruption ended the lava cooled to form basalt and when the ice melted, it revealed Rampart Ridge. I want to hike the loop trail up and around the ridge to gain a better feel for this lava flow and the size of the glacier but for today, just thinking about it from Longmire Meadow is amazing.

One thought on “Longmire Meadows, Rampart Ridge and Mt Rainier”