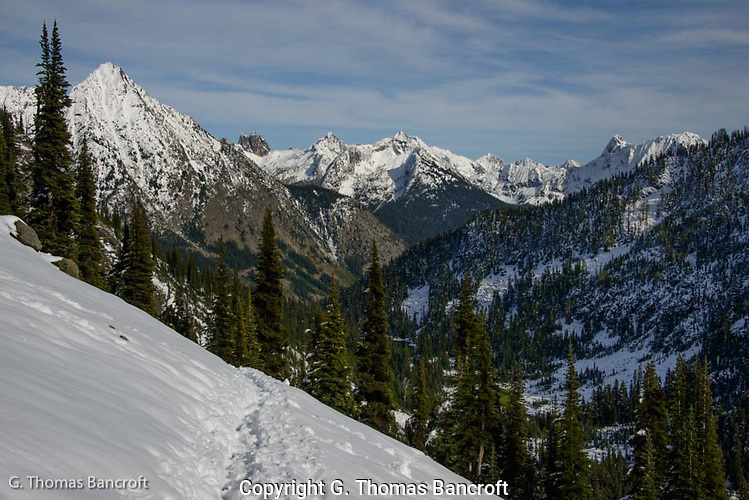 4 October: A smattering of snow covered the trees and the ground as I started up the trail through an ancient forest of hemlocks, spruce and firs.  A few inches of snow still clung to many branches and it fell periodically in big clumps and crashed through the branches.  A small clump hit me on the head and it felt like I was hit by an ice ball.  Luckily, no big clumps hit me. Fortunately, I found this trail open in the Sawtooth Roadless Area of the Okanogan National Forest.  The National Park Service closed all the trails in North Cascades National Park because of the shut down of the federal government. 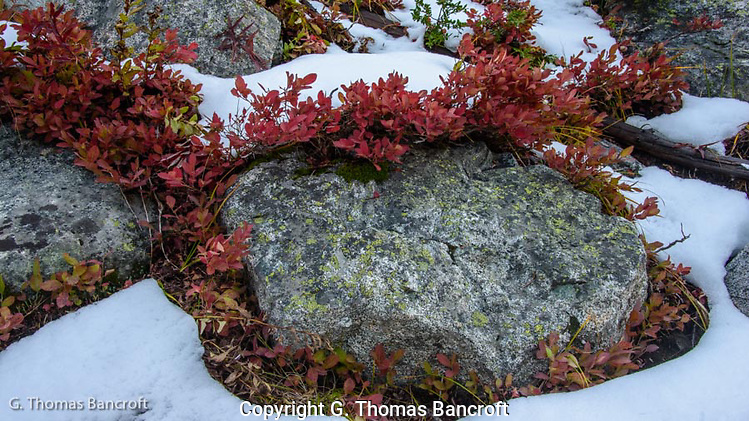 The blueberries leaves had turned a crimson color and stood out against the granite and snow. (G. Thomas Bancroft)

For the first mile, the trail climbed through a series of switchbacks up the valley.  Large mountain hemlocks, Engelmann spruce, and subalpine firs created a cathedral atmosphere to the climb. As I started up the trail, a chipmunk scurried across the trail, down a log, and into a hole. The forest smelled sweet and fresh because of the recent snow and this helped with my puffing up the trail.  As I climbed, squirrels scolded from tree branches.  Little piles of shredded cones along the trail showed they were busy harvesting. A short ways up the trail, I came to large talus slope that stretched several hundred feet across and went up and down the mountain for quite a ways.  The mountain ash added color with their red berries and yellowing leaves.  Blueberry leaves were a dark crimson color.  The tops of the boulders were covered with snow.  Several pikas chided me as I passed through.  I spent some time searching for them but could never spot one.  They must be hurrying to pack away food for winter for this seems to be an early snow even at this elevation.   The hillside curved sharply allowing me to look back through the trees at the talus slope. 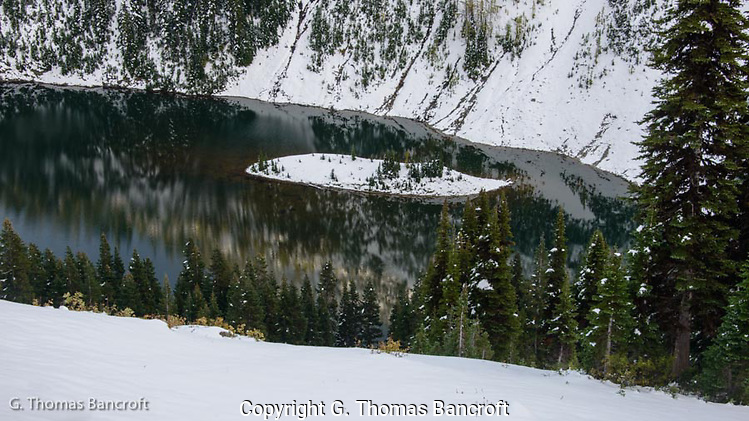 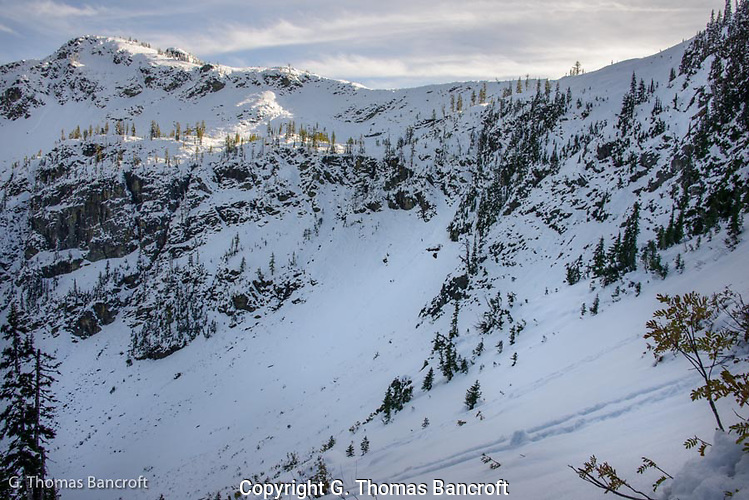 After a mile, the woods opened and I hiked across a steep slope. Snow had increased to at least a foot deep and I could hear it dripping everywhere.  Small streams ran down the trail and off the slopes adding to the musical background. Lake Ann sat below in the upper end of a three-sided cirque.  Thousand-foot walls rose from the water’s edge almost straight up.  The cliffs reflected brilliantly in the calm water.  I spotted a person casting along the eastern-forested shore of the lake and could easily hear several people chatting down there.  The view over Lake Ann was breath taking.  The setting sun glowed over the rim.  A scattering of larches dotted the steep bowl and gave a nice contrast to the snow and rock. A ruby-crowned kinglet flew onto a branch 4 feet from me and checked me out.  Several chickadees called farther down the slope. 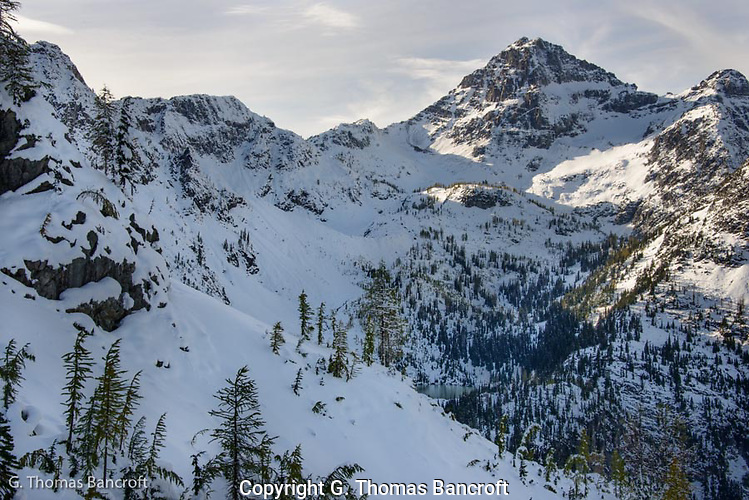 I climbed another series of switchbacks to Heather Pass and found the snow over 2-feet deep.  I chatted with two men coming down the trail from Maple Pass and they said the snow was over 3 feet there. The snow crunched under my feet suggesting the temperature had dropped below freezing.  From Heather Pass, Black Peak (8970 ft) stood majestically to the northwest.  A singe ski track crossed the slope toward Lewis Lake that sat below the peak. Larches dotted the slopes.  In another week or two they will turn golden and make this view even prettier. 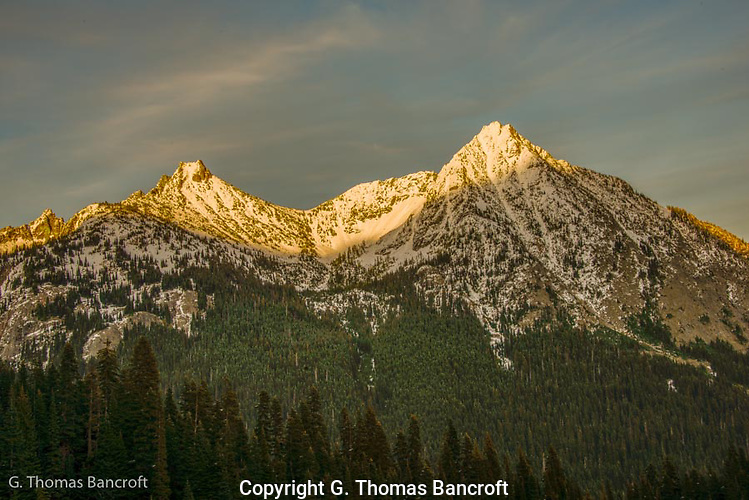 The sun would set soon so I decided I could not climb to Maple Pass before dark so I turned around and started back down the tail.  The hike back was serene and mellow.  As the sunset, the light gradually warmed and accented the peaks in all directions.  The final half-mile I walked in deep twilight. 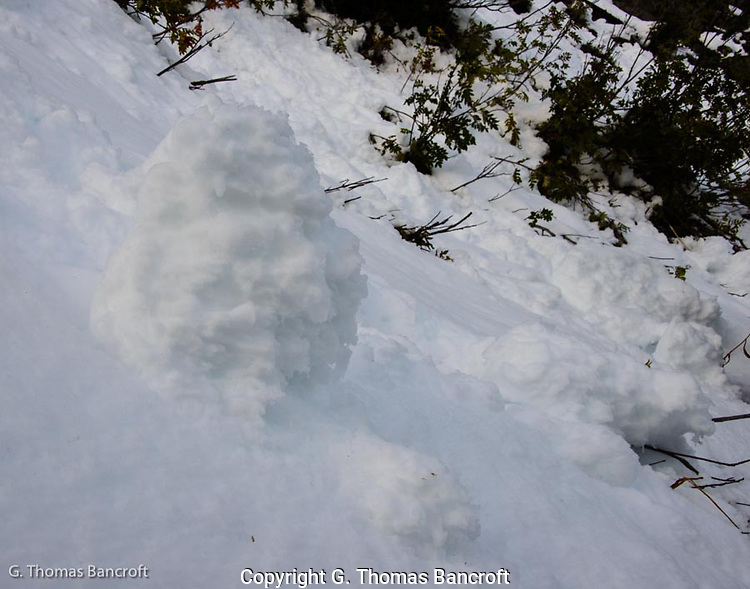 Snow had fallen off rocks above and grew to large snow balls as the rolled down the step slope. (G. Thomas Bancroft)