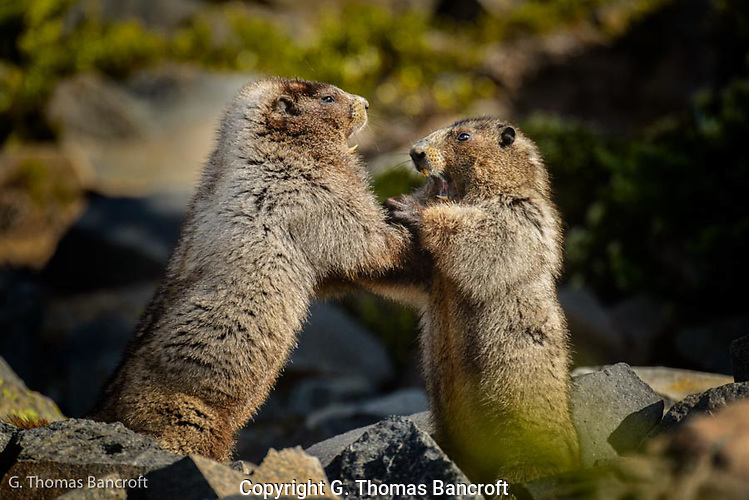 I discovered these two marmots in an intense wrestling match much like two puppies. (G. Thomas Bancroft)

Passion brings them together

Up on back haunches

Over on his back he goes

Loser says he has had enough

The marmots walk off

I rounded a corner near the west end of Sourdough trail to discover two Marmots embraced in conflict.  Each was up on his back legs and was punching the checks and chest of the other.  Their large incisors were glistening as they bit at each other but did not seem to be trying to inflict damage.  It reminded me of two puppies playing fiercely with each other.  One would gradually push the other backwards and then it would reverse.  Finally one succeeded in pushing the other over onto its back.  This individual worked hard to right himself and shortly after he regained his upright position, he suddenly stopped wrestling and turned heading rapidly across the boulders to his den.  The victor stood there for 20 or 30 seconds in what appeared to be astonishment that the match was over.  He then turned and went 50 yards along the boulder pile to his den.  He was only in the den a few moments when he emerged to run down across the trail to a patch of dirt where it looked like he ate a little dirt.  He then headed across a snow field toward another set of boulders.

Marmots are highly social creatures and young males are known to play with each other.  They frequently live in colonies if the area for dens is suitable for a number of burrows.  A dominate adult male may be able to defend burrows for several females.  If food is less abundant they may be monogamous instead.  Burrows are critical for their protection from predators and places for them to sleep through the winter.  They will dig their own or find crevices in rock fields.   The boulders in this field varied from toaster size to as large as washing machines.  I saw the one individual go down under a large rock into what looked like a miniature cave.  They feed on plants in the surrounding area and need to eat enough during the summer to build sufficient fat reserves for them to fast through the long winter at these high elevations.

I had hoped to see a marmot on this hike and turned out to be blessed to see some fascinating social behavior. 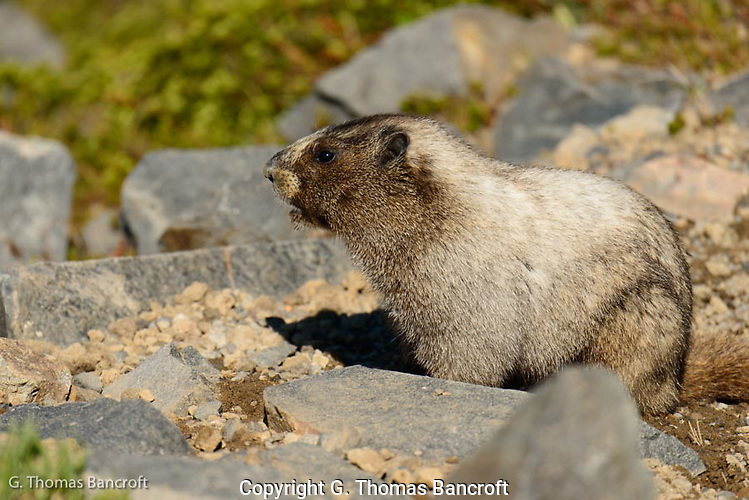 The Marmot looks across the alpine meadow just before he runs across a large snow bank to another set of rocks. (G. Thomas Bancroft)