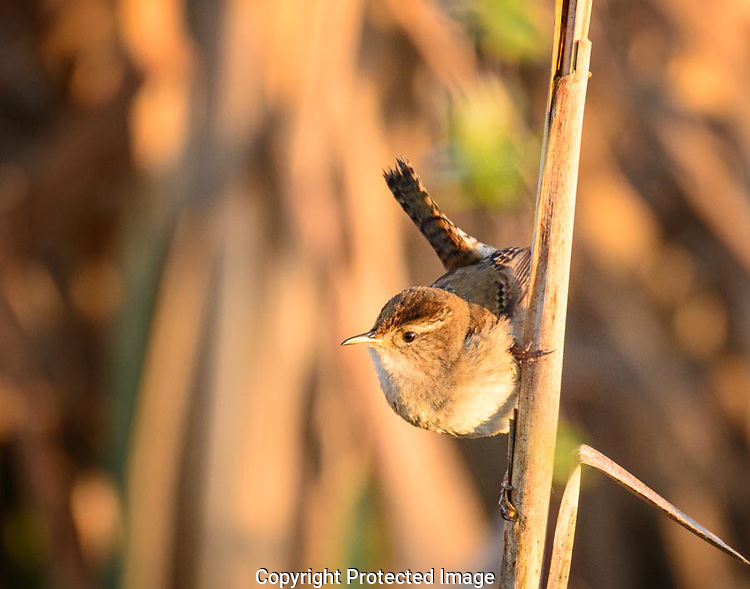 The Marsh Wren flew from one cattail to another singing loudly to annouce his territory to others. He paused for a few seconds while hanging from the side of a cattail stalk and allowed me to create the shot. (G. Thomas Bancroft) (see www.thomasbancroft.com for pictures)

As I started down the trail toward Spencer Island, the gurgling and raspy song of the Marsh Wren filled the air.  Cattail patches are in the wetlands on both sides of the trail and at regular intervals I could hear a male wren declare loudly that this patch of cattails belong to him.  Males in western Washington have a large repertoire of songs with more than 100 different ones.  Adjacent males spend a great deal of time in vocal combat.  Song is the primary way they defend a territory and having a territory is critical for attracting a mate.  I saw several males actively carrying nesting materials.  Males will build multiple nests as part of their effort to find a mate.  A female may take one of these or may build her own nest once she picks a male.  In Washington, Marsh Wrens are polygamous and a male with a prime territory may be able to attract more than one female. 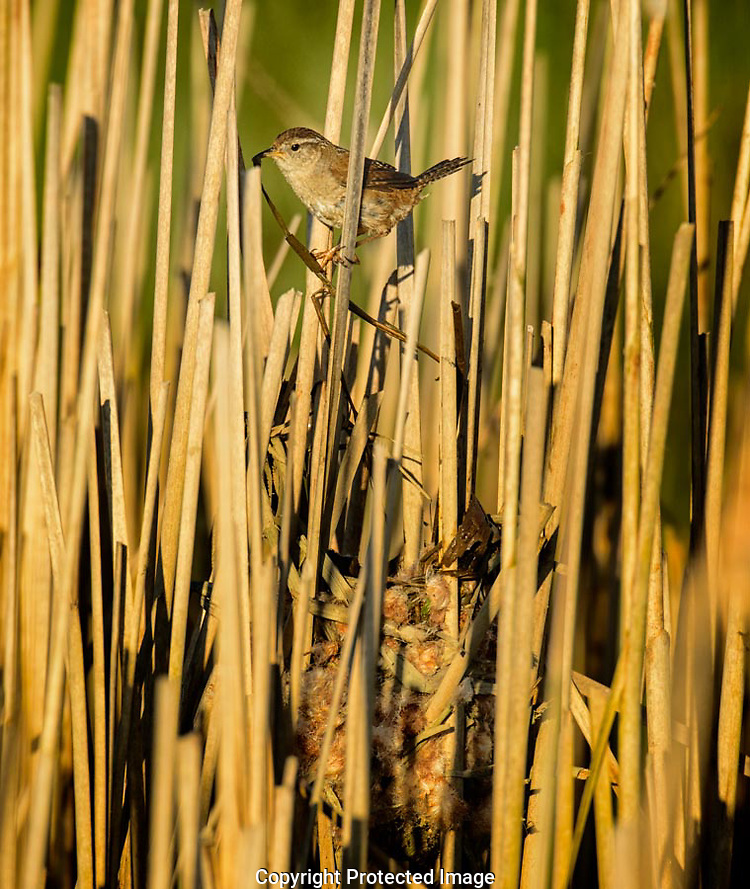 The Marsh Wren flew up from the water with a wet cattail leaf in its bill. It paused briefly before dropping into its nest where it proceeded to weave the leave into the wall of the nest. (G. Thomas Bancroft)

On the boardwalk on Spencer Island, I watched for 30 minutes one male actively constructing its nest.  The nest was woven between several cattail stalks about 2 feet above the water.  The nest cup was complete and the male was working on building the dome over the nest to form the enclosed nest cavity.  He flew down to the water to grab a strip of cattail leaf and carry it up to the nest where he proceeded to weave it into his structure.  Jumping in and out of the nest as he pulled the strand to where he wanted it.  Ever few seconds during this process, he would stop and sing loudly.  After several trips with cattail leaves, he would fly to an old cattail spike which still had down and pull piece of down off to take back for lining the inside of the cavity.  About every 5 minutes or so, the male would make a flight out to one or another corner of its territory, sing a few songs and then return to nest building.  It takes them about 9 or 10 hours to complete a nest and they do this over several days.  He was singing away as I finally walked on down the trail. 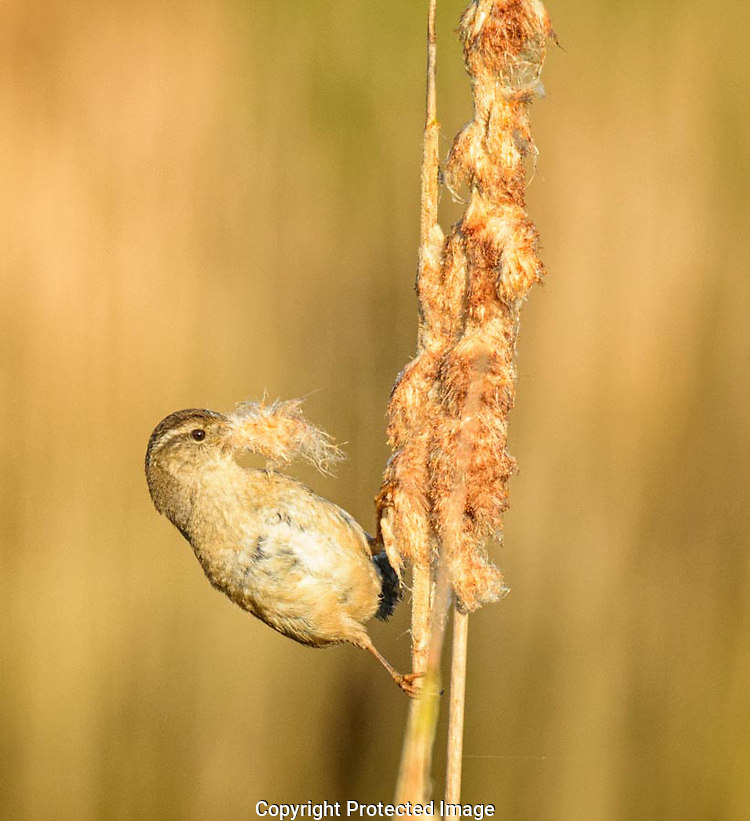 The Marsh Wren was actively building its nest and periodically would fly to a cattail stalk to pull down from the old seed pod to use as lining in its nest. This should make a soft and smooth lining. (G. Thomas Bancroft)

Spencer Island is protected and has several loops on dikes that you can walk around the marsh habitat.  I watched several green-winged teal feeding in the shallows and a great-blue heron squawked and flew off as I rounded a corner.  White-crowned Sparrows, Song Sparrows, and Spotted Towhees were singing loudly in the bushes along the trail.  An Osprey sat on top of a dead snag and was quite picturesque against the blue sky.  An adult Bald Eagle flew in at one point and scattered the teal.  The walk was very pleasant and a nice way to spend the morning. 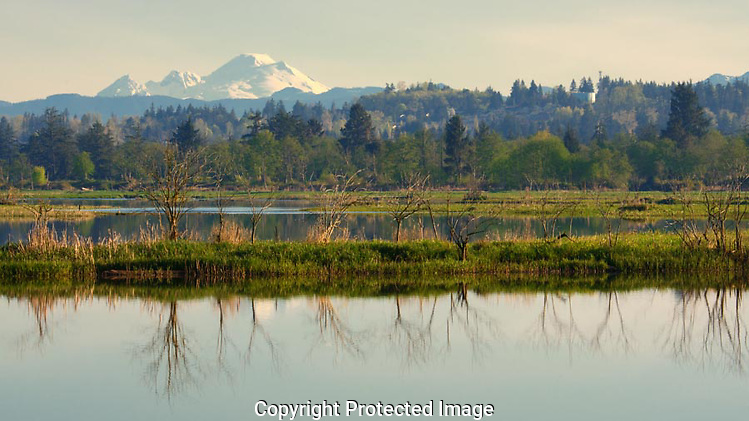 Mt Baker looms over the marsh at Spencer Island, creating a stunning backdrop to the scene. (G. Thomas Bancroft) 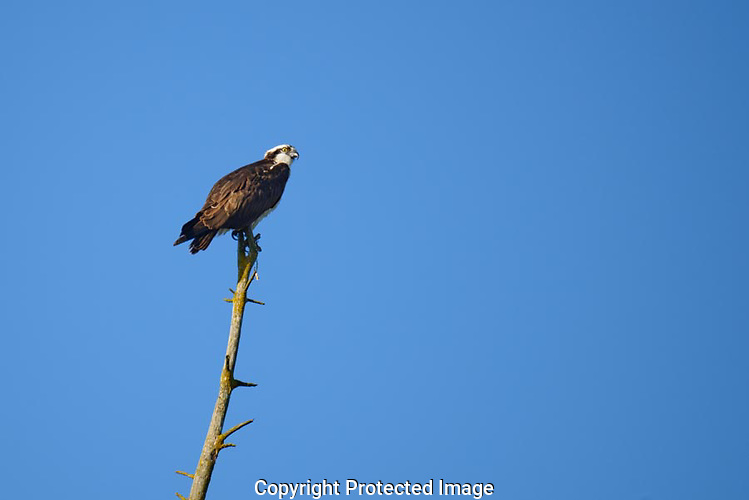 An Osprey flew into a dead snag at Spencer Island and peered out across the wetlands. (G. Thomas Bancroft) 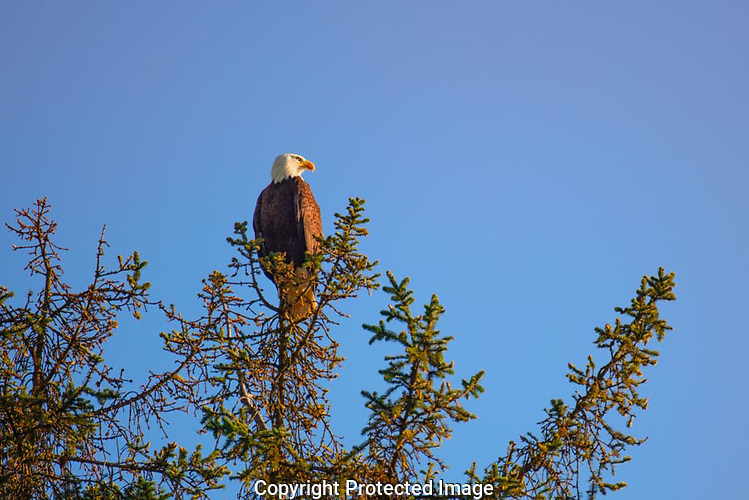 The morning light highlighted the eagle’s feathers and gave a warm cast to his feathers. (G. Thomas Bancroft)