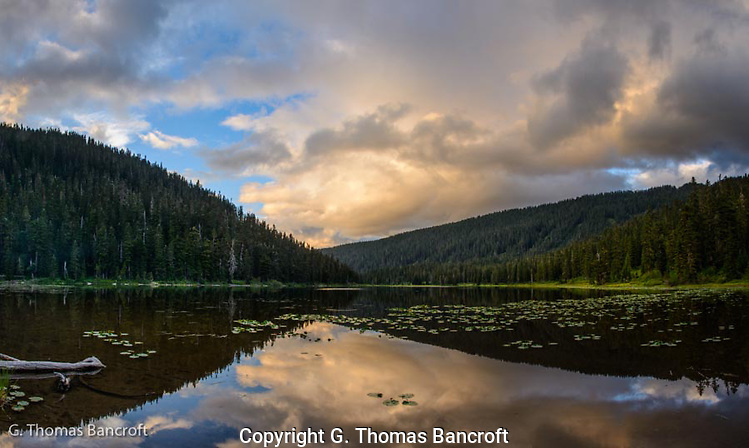 The clouds were shifting rapidly across Lake Janus as the sun was preparing to set. The lake was flat, forming a wonderful mirror for the changing sky. I found a good rock to sit and watch. It was an uplifting period and a great end to a wilderness day. (G. Thomas Bancroft)

Lake Janus sits below Jove Peak along the Pacific Crest Trail in the Henry M. Jackson Wilderness.  This wonderful subalpine lake is at 4,100 feet and you can camp along the southern bank.   Jove Peak rises steeply on the east side to 6,007 feet and a major but lesser hill sets to the west.  The lakeshore is lined with a mixed forest dominated by mountain hemlocks and subalpine firs with a few silver firs for variety.  The understory around the southern edge is a lush growth of huckleberries, blueberries and asters.  The huckleberries and blueberries were ripe and delicious in late August.

I camped for two nights in a flat area surrounded by trees and only a short distance from the lake.  A meadow of grasses, sedges and a few flowers formed a light green expanse just beyond my camp.  Pond lilies were scattered across the shallow end of the lake.    Small frogs, less than half an inch long, were hoping along the shore, some still had small tails, showing they were just finishing metamorphous from tadpoles.   A spotted sandpiper landed on a log against the shore, bobbed several times, before hopping down to the waters edge and working along the shore.  The setting was sublime and I found a place to sit to watch.  An Osprey called loudly and I found it sitting on top of a dead snag along the eastern shore.  It flew across the lake, dove for a fish, but I could not tell if it was successful.  I decided I would visit the shore in different lights to see how the lake’s mood changed during my stay. 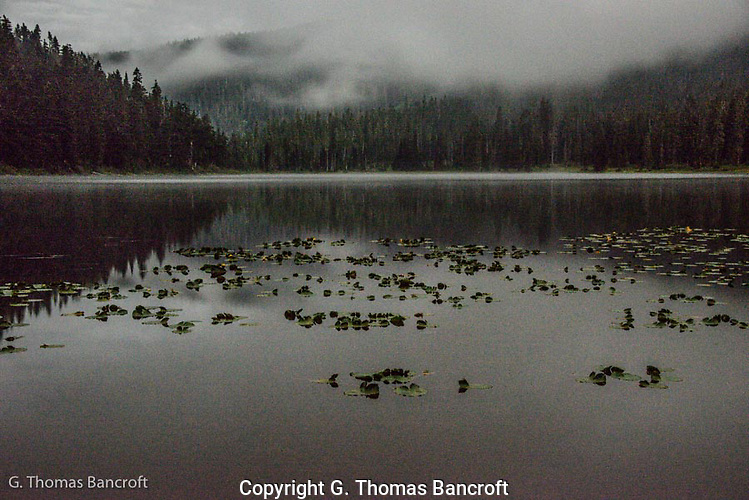 At 3AM, the moon was glowing through clouds giving a eerie feel to the woods. I walked down to Lake Janus to find mist rising from the lake and clouds drifting by the forest. A great-horned owl called softly from the forest on the right. The lake was sublime and I watched for a long time before retuning to my tent. (G. Thomas Bancroft)

I set my alarm for 10PM for the Milky Way and 3AM for the waning moon.  The first night, it was cloudy at 10PM so I went back to sleep.  At 3AM, the moon was directly overhead fading in and out of the clouds.  It was quite eerie and I noticed that I kept looking over my shoulder to see what might be there.  I walked down to the lake to see how it looked in the moonlight.  Mist was rising from the lake and clouds were drifting across the forest.  A great-horned owl called softly from the forest on the right.  The lake in this light was serene and I lost the eerie feeling.  I watched for a long time before retuning to my tent. 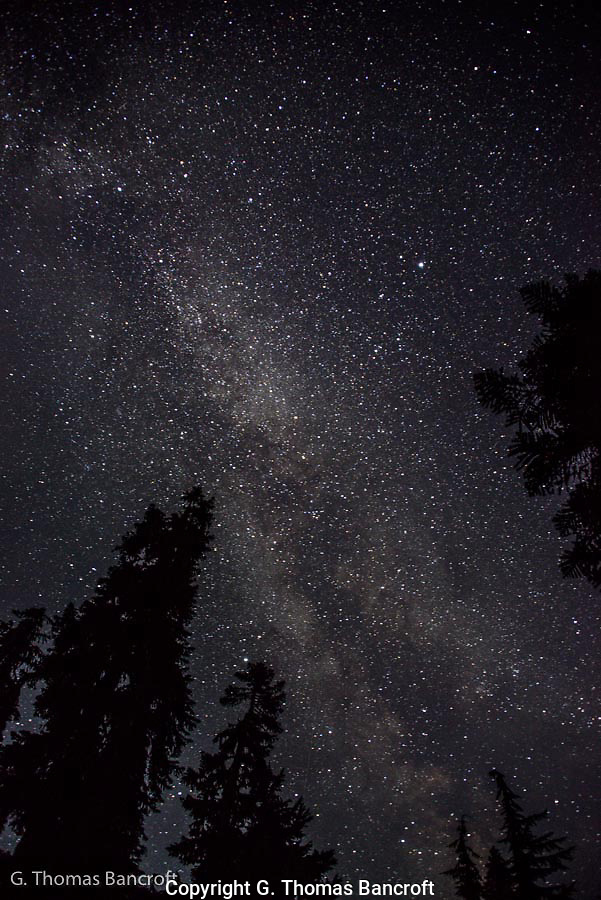 The stars were bright above my camp site on Lake Janus. I could see thousands and thousands of stars. I stared for a long-time in amazement of the sight. (G. Thomas Bancroft) 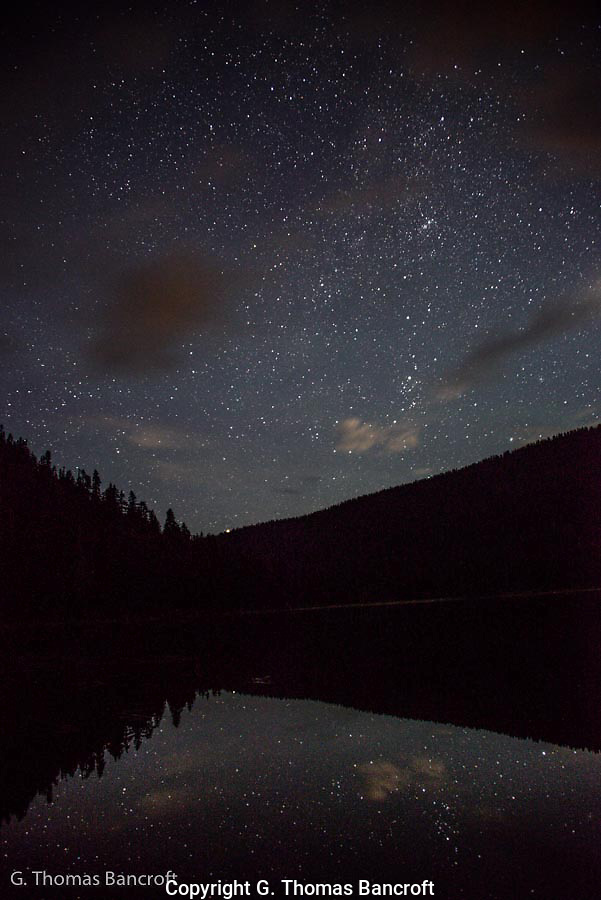 Thousands of stars were visible above Lake Janus and reflected in the mirror flat water. It was an inspiring and invigorating sight. I stood watching for a long time in awe. (G. Thomas Bancroft)

A 10PM, the second night, I found the stars out and bright.  The Milky Way was right over my tent and I stared in wonder as I climbed from my tent.  I could see thousands of stars at once.  A gas-dust cloud in the galaxy that absorbs light of the stars forms the dark area through the middle of the Milky Way.  It was perfect to finally see this.  I walked down to the lake, hoping the Milky Way would be reflected in the lake.  It was not particularly distinctive but there were still lots of star reflections.  The air was fresh and I noticed that a few clouds were drifting by because stars would disappear for a few minutes and then reappear.  The long exposure showed the clouds in the photograph.  A trout hit the surface by a lily pad and its dorsal fin created a ripple as it swam swiftly to deeper water.  The night and the lake was tranquil, the owl called once as I headed back to my tent. 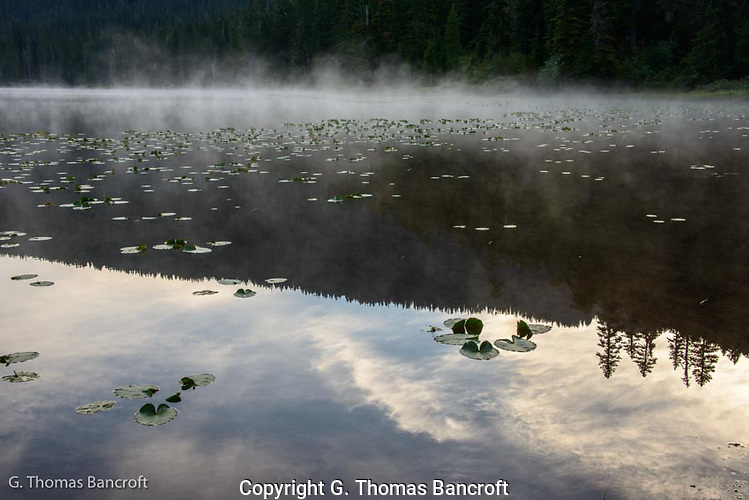 The mist was rising from the left side of the lake and drifting across the lake. The morning clouds were wispy and delicate. The tranquil setting inspired me for the days hike. (G. Thomas Bancroft)

In the morning, I walked down to the shore with my tea to sit.  Mist was rising from the east side of lake and drifting across.  Blue sky with wispy clouds was reflected in the water and constantly changing.  A spotted sandpiper called from the far shore.  A pair of Canada jays landed in the tree behind me, squawked once or twice and then moved back into the trees.  Two red-breasted nuthatches called softly from behind my tent. The scene was mesmerizing and I sat for a long while.  I walked back to my camp exhilarated and ready for the hike back out of the wilderness.

One thought on “Moods of Lake Janus in the Henry M. Jackson Wilderness”