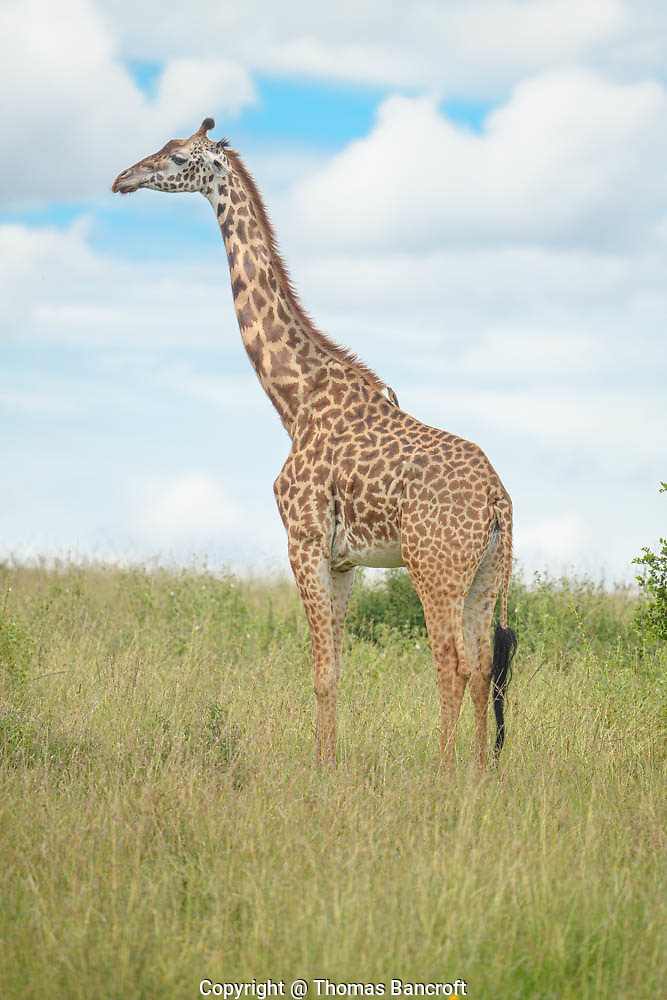 The Giraffe stood tall, gazing across the savanna. She projected a sense of grace, elegance beyond what I expected, and her 16 feet was impressive. Nairobi National Park, Kenya. (Thomas Bancroft)

The word “Olemut” came as a whisper from the front, like that uncontrolled response one has to the unexpected, so I whipped around instantly, for Robinson, our guide, had been spotting things all morning, and no doubt something lurked in the bush. He had brought us through the gates into Nairobi National Park four hours ago, and now my brain overflowed with new sightings, sounds, and smells of Africa. I held tight to the frame of the Landcruiser while I scanned the savanna as we inched along the dirt track.

There, a hundred yards away, was something that rose above the green bushes. With another shrub behind us, its head became visible, a giraffe. I’d seen giraffes in zoos, many a time. We used to take our preschool daughter to the Miami zoo for a Sunday stroll. She liked the animals and really liked the numerous playsets spread around the park. I’d get to spend an hour in the aviary, watching birds from distant continents. 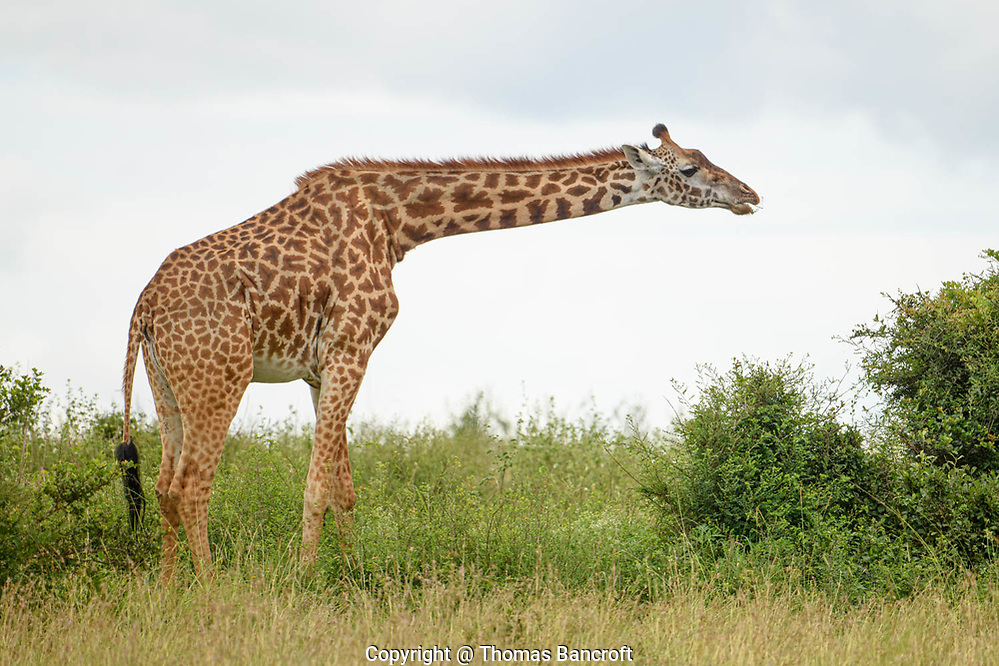 The Maasai people call these mammals, Olemut and this one chewed on leaves that it had just nibbled from the bush. Populations are still healthy in Kenya but roads and fences are limiting their ability to move through the savannas. (Thomas Bancroft)

This giraffe, though, had no caretaker, no one bringing it food twice a day, checking that it had water, my first wild one. My hands gripped the open roof, and I held my breath. Would it run or let us get closer? A Maasai Giraffe, one of four kinds found across Africa. These roam the savannas in southern Kenya and Tanzania.

The Reticulated Giraffe lives in Northern Kenya, and I might have a chance to see it when we visit Ol Pejeta Conservancy in a week. The Southern Giraffe is the most populace of the four and the Northern the least, with only 5,600 individuals still alive. Giraffes are threatened because of habitat loss and the fragmentation of their home ranges. To survive the weather patterns of East Africa, they must migrate to find food and water. Their ability to move has become more complicated with increased human populations, road networks, and fences.

The car bumped around a corner and stopped. There, she stood, magnificent, at least 16 feet tall, all grace and elegance. Perhaps, I could walk between her legs with hardly a duck. She towered over us and paid us no heed. Extremely long black hairs hung from her four-foot tail, and the pattern of brown and white created an intricate jigsaw puzzle across her body.

“A Red-billed Oxpecker is on her back,” I blurted. It sat just behind the giraffe’s mane, its red-eye, yellow eye-ring, and red-bill, made it look clown-like. I’d read about these birds but never seen one. The mutualistic relationship between mammal and bird is a classic example of co-evolution. Here it was, just there in front of my eyes. Oxpeckers carefully groom the fir of their host, picking ticks, mites, and parasites from the hide. Mammals will even let them work around their eyes and mouths. I hadn’t expected this bonus, a partnership to envy. 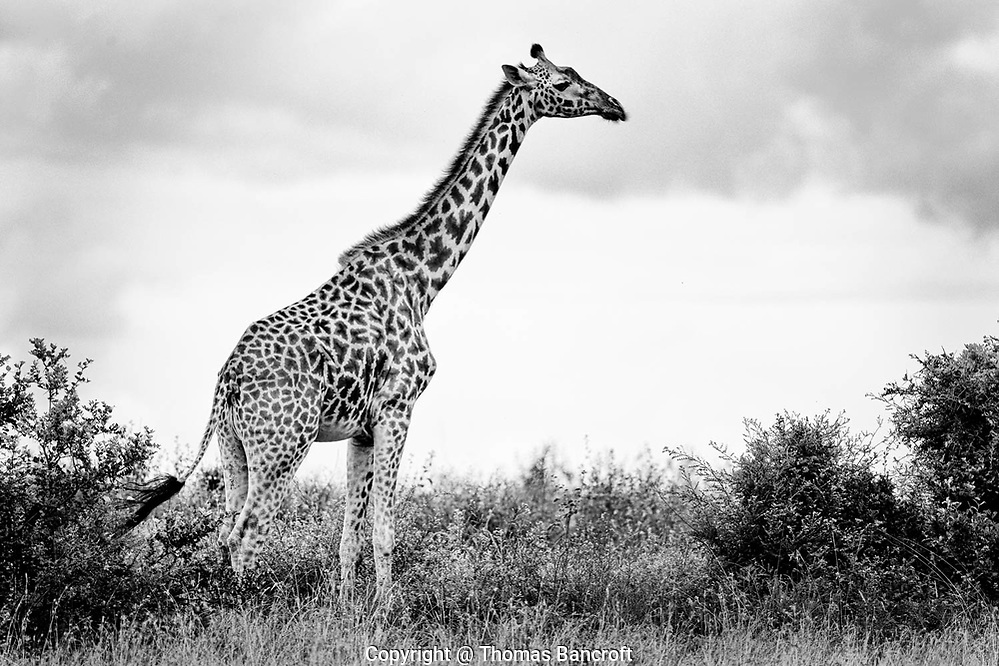 The pattern of dark and light on a giraffe is as unique as a human fingerprint and allows giraffes to be individually identified by researchers in Kenya. (Thomas Bancroft)

As the giraffe turned around, I focused my binoculars on her coat. The patterns are unique to each individual, and I thought a black and white photograph might emphasize the intricacies of her design. She began to mosey toward some acacia. This species tongue is massive and resistant to thorns, and they can wrap it around twigs pulling the leaves out from among the spikes. Her long neck leaned over, carrying that enormous head with ease, and she began to nibble. As she moved, wrinkles started to form in her skin. Her neck must be half her height, and yet it has the same number of vertebrae as mine, seven.

Perhaps, right then, her 18-inch purple tongue was successfully grabbing some leaves, and I wished that we could be closer, so maybe I could have seen that feat. Some people say that giraffes galumph, but this animal appeared agile and beautiful. These mammals are capable of covering long distances on those legs, galloping endlessly to reach their destination. Here was something I had only dreamed that I might see, and she was exquisite.  Stunning might be the best word. 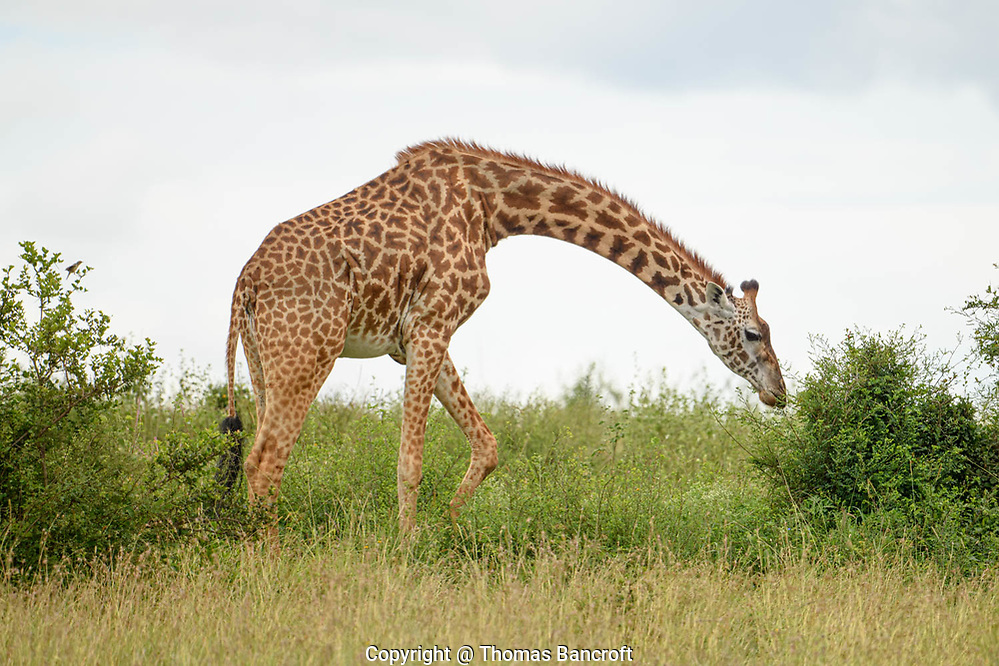 A giraffe has the same number of vertebrae in its neck as any other mammals, but the seven vertebrae are longer than for most mammals and provide almost half the overall height of a giraffe. This giraffe allowed us to watch it for a long time as we toured through Nairobi National Park in Kenya. (Thomas Bancroft)

2 thoughts on “Olemut – The Giraffe”