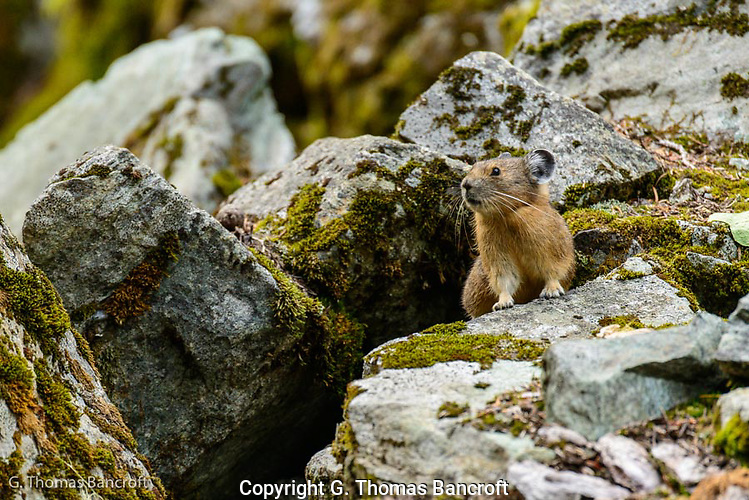 Pika popped out of its burrow under a boulder and gave its alarm call as I approached. It then froze for several minutes waiting to see if I was a threat. (G. Thomas Bancroft)

As I crossed the saddle into the Watson Lakes drainage, two pikas gave their typical ‘alarm’ call and ran for their burrows under the boulders.  A field of boulders covered the slope on the side of the trail for a 100 or more feet and up the slope a similar distance.  Some boulders were the size of washing machines and there were scattered in a pile as if some giant had thrown their building blocks in a corner.  Pikas don’t dig their own burrows and are dependent on rock piles to find safe places to live.  I couldn’t stop on my hike into the Lakes so I planned to have more time on my way out.

On my way out, I found one of the rocks along the trail and sat to watch the boulder field for a while.  Shortly a pika hoped up on a rock 50 feet away, with a mouthful of ferns.  It sat, chewing ferns for several minutes before ducking under a rock.  Pikas eat vegetation and do not hibernate so they must harvest plants all during the summer to store for winter similar to a farmer “haying” for their livestock.  They then have a source of food to eat under the rocks and snow all winter.

A second one popped out on a rock closer to me.  They have cinnamon-brown fur over the body, white fur on the feet and legs, and gray fur on their large round ears.  The ears have a white edge and fluff of fur in front.  Their whiskers are almost half the length of their body, sticking three to four inches out from their round face.  This individual moved down through the boulder field before disappearing behind a one.

Several more came out of their hiding places as I sat and watched.  As long as I stayed very still, they seemed to ignore me and go about their business.  I sat for 30 minutes, just enjoying seeing these wonderful creatures move back and forth across their home.

Pikas don’t like warm climates and have a hard time surviving if temperatures average above 80 degrees for very long.   Climate change has been affecting their distribution; unfortunately they have disappeared from many areas in the west.  Protecting habitat for them is critical for their continued survival.  It was so wonderful to have this chance of observing them.