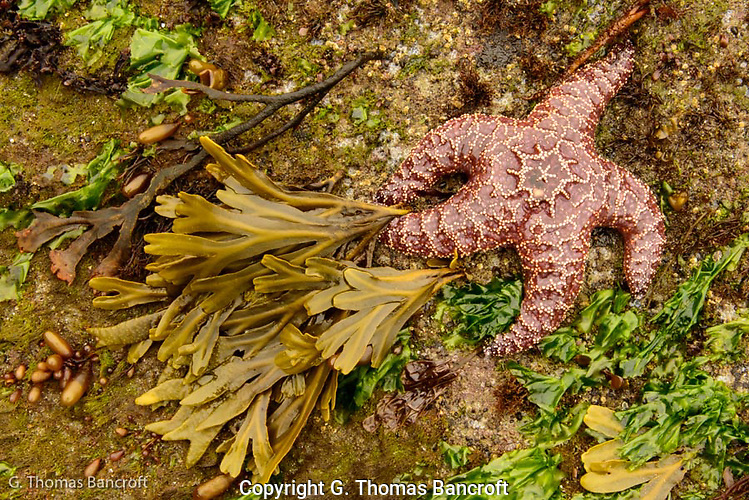 The tide was going out and I found this ochre sea star on the side of a rock with various algae. The sea star didn’t move in the 20 minutes I stood nearby watching. I was intrigued by the design formed by the sea star and the brown algae. (G. Thomas Bancroft)

I am excited to announce that I have a photograph hanging in the Wilderness Forever 50th Anniversary Photography Exhibition. My photograph of a purple sea star and algae taken at Scotty’s Bluff along the coast of the Olympic Wilderness received an honorable mention in the wildlife category. The exhibition is on display at the Smithsonian Natural History Museum in Washington, DC through the end of the summer in 2015. I am incredibly flattered that the judges chose this photograph out of more than 5,000 submitted to participate in the celebration. If you make it to DC in the next few months, stop by to see it and let me know how it looks.

Congress passed the Wilderness Act, and President Johnson signed it into law on September 3, 1964. Wilderness is a protection overlay applied by Congress to public lands managed by one of four federal agencies: the National Park Service, Forest Service, Fish and Wildlife Service, or Bureau of Land Management. The Wilderness Act defined a process for designating Wilderness in national parks, national wildlife refuges, and national forests. In 1976, Congress added lands managed by the Bureau of Land Management when it passed the Federal Lands Policy and Management Act. Congress has designated more than 109 million acres including almost 4.5 million in Washington.

Congress has designated over 90% of Olympic National Park as Wilderness including portions of the strip of land that borders the beach along the Pacific Ocean. I took this photograph when I hiked south along the beach from Third Beach where I had camped. Tom Martin, my friend who leads American Forest Foundation in Washington, DC, had told me to check out Scotty’s Bluff because the tidal pools are spectacular there. I rose early so I could reach Scotty’s Bluff by 6:15AM when low tide would just be beginning. As he predicted, the tidal pools and surf at Scotty’s Bluff glowed in the morning light, and I found some great things including this purple sea star.

At the time I took this photograph; I was taking an online photography course with William Neil. William Neil creates landscape photograph art of wild country. His work is mesmerizing and inspirational. As I composed this shot, I went through the checklist of techniques he had taught us. Bill’s guidance paid dividends that day and continues to enlighten my photography.

Thank you Tom and Bill. I thank all of you who enjoy my photography too. You inspire me to keep growing.