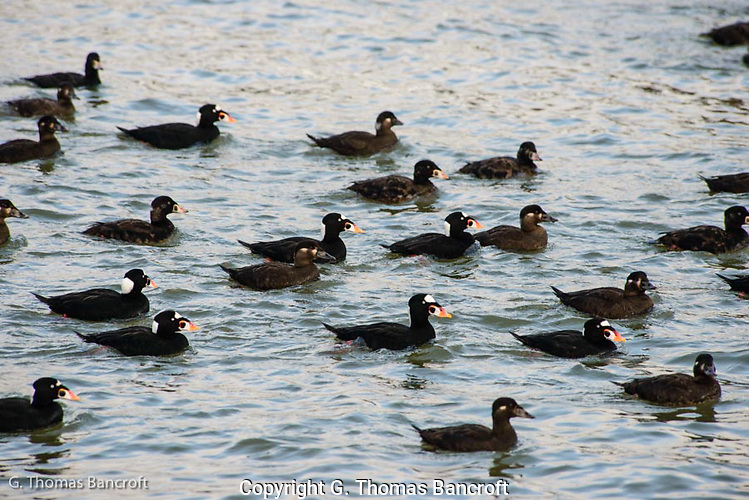 The flock moved out from the piers when the ferry pulled into the dock. Many of the birds are pushing a small wall of water in front of them. Nice mixed group of adults and first winter birds. (G. Thomas Bancroft)

My fingers quickly became numb in the below freezing air as I surveyed the flock of birds around the pylons at the Mukilteo ferry dock.  The pylons and rocks at Mukilteo ferry dock must have a rich growth of mussels for a large flock of Surf Scoters and Barrow’s Goldeneyes seem to winter there each year.  The flock ebbs and flows from around the pylons to open water in response to the comings and goings of the ferry and passengers.   Individuals were constantly diving by the base of posts and swimming under piers in search of food.  Several times I saw individuals surface with a large mussel clump in its mouth to be instantly attacked by a young Glaucous-winged Gull.  It looked like two or three gulls had a strategy to wait and see if they could steal food from unwary scoters.  The scoters quickly dove to eat their morsel under water and not loose it to the gulls.  The area had the constant chatter of scoters. 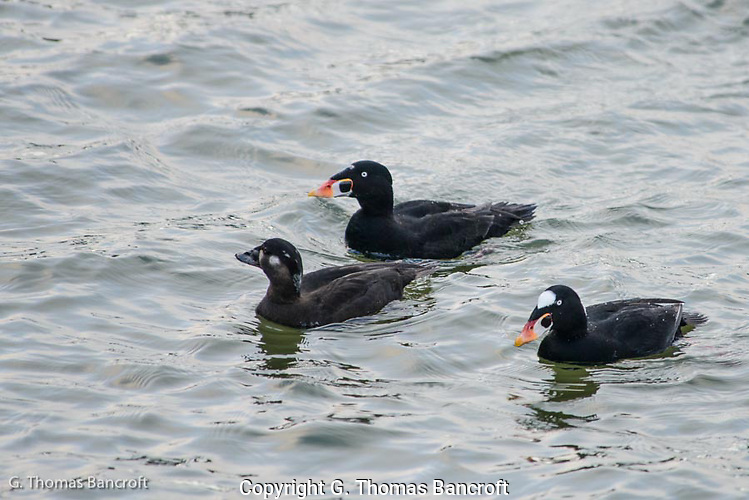 Three Surf Scotters move in close to shore before beginning to feed. The femail leads the group with two males along side. The bill and head pattern on the males is quite distinctive for this species. (G. Thomas Bancroft)

The adult male surf scoter is a gaudy looking beast.   Its bill is orange with a black dot near the base that is surrounded by a white patch.  It has a white patch on the forehead, a large white blob on the back of the head, and all the rest is black.  They stand out in the flock.  Adult females are mainly dark with a little white at the base of the bill, on the checks, and a small amount of white on the back of the head.   Young birds are in between in color.    The adult male Barrow’s Goldeneyes are quite striking, with a crescent white patch at the base of the bill and white along its side.  The adult females have a wonderful dark brown head with a mostly yellow bill.  The pairs are quite striking and remind me of seeing beautiful couples walking down a street. 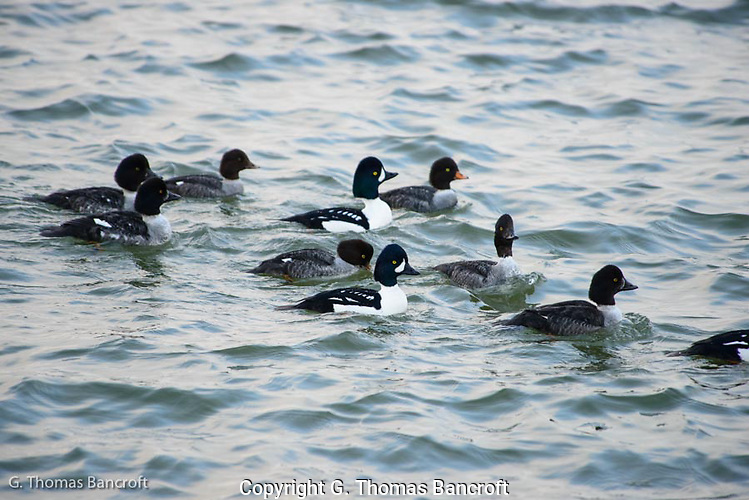 A small raft of Goldeneyes pass along the shore. The adult female has the yellow-orage bill. The adult males have the white cresent moon at the base of their bill. Several first winter birds are also present. (G. Thomas Bancroft)

Surf Scoters breed in Canada and Alaska while some Barrow’s Goldeneyes nest in continental United States, most nest farther north.  The wintering population of sea ducks in Puget Sound has decreased substantially over the last 40 years.  Some information suggests that populations may have decreased by as much as 70% in the last 40 years.  It is not known why numbers have decreased so much.  One thought has been that there has been a decrease in food supply.

In Puget Sound,  Washington has joined into a national study of mussels to assess what is happening in the environment and whether toxic chemicals are affecting mussel populations. Snohomish County has been very active in this effort and the hope is to expand the study across Puget Sound in a broader effort.

After a while, it seemed like my fingers were frozen so I headed back to my car to catch the ferry across to Whidbey Island.  If you want to see surf scoters and Barrow’s goldeneyes, the Mukilteo Ferry dock is a place to look during the winter months.  It is definitely a sight worth seeing.  They are spectacular birds in Puget Sound. 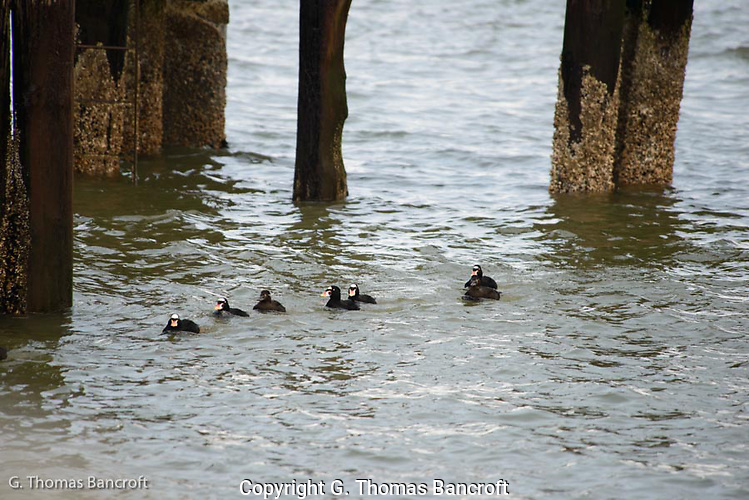 A group of Surf Scoters drift in past the end of the peer heading toward a feeding area. (G. Thomas Bancroft)