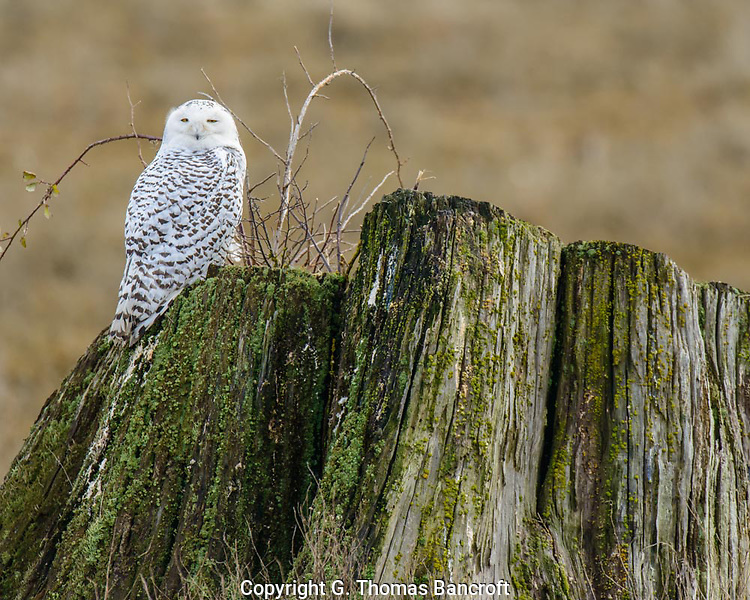 The Snowy Owl stood upright on the edge of the stump, looking slowly from one side to another. Its eyes partially closed and it seemed to be just enjoying the morning. (G. Thomas Bancroft)

The heaviest North American owl, standing about 2-feet tall and weighing almost 4 pounds, the Snowy Owl, is an incredible sight to see.  This bird, made famous by the Harry Potter series, breeds on the Arctic tundra and only flies far south in winters when food is apparently in short supply farther north.   This winter we are lucky because some have flown into Washington and British Columbia.

One of the best places to see them is at Boundary Bay Wildlife Management Area in Southern British Columbia; so on Sunday I met a friend in Bellingham and we drove north to look.  You take 72nd street out of Surrey and drive down to the coast.  We walked SW along a dike for about a mile to find the owls.  Four birds were up close to the dike and sat out in the open.  Occasionally they would preen a little or stretch their wing but generally they seem to be relaxing this day.  We saw 4 more far across the tidal marsh toward the coast.  An additional individual was on top of the water tanks on the inland side of the dike.  This bird moved around the tank field while we were there, at one point sitting peacefully on a microwave dish. 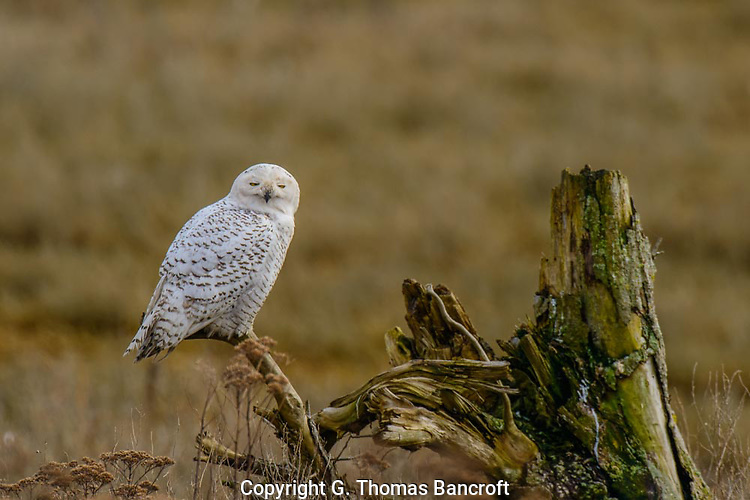 The Snowy Owl rested peacefully on a dead branch just above the grassland-marsh. It ocassionally looked lazily from side to side. (G. Thomas Bancroft) 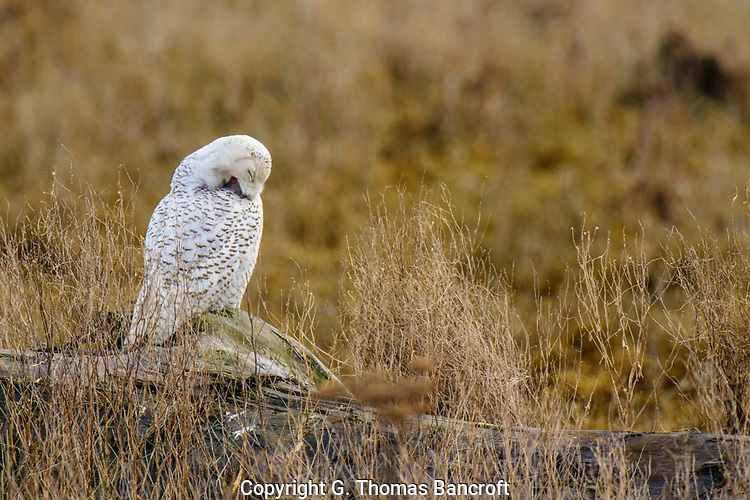 Maintaining feathers in critical for birds. This Snowy Owl worked on the feathers of its wing and breast, gradually pulling them and stratighting barbules (G. Thomas Bancroft)

They feed on mice, voles, and rabbits and along the coast here also take Horned Grebes and small ducks.  These owls feed at any time during the day or night, on their Arctic breeding grounds it is light all day long so they are well adapted to feed during the day.  Although it is hard to tell, these birds appeared healthy.  Adult females are bigger than males.  Males have whiter plumage than females or first-year birds, which are impossible to tell apart in the field. 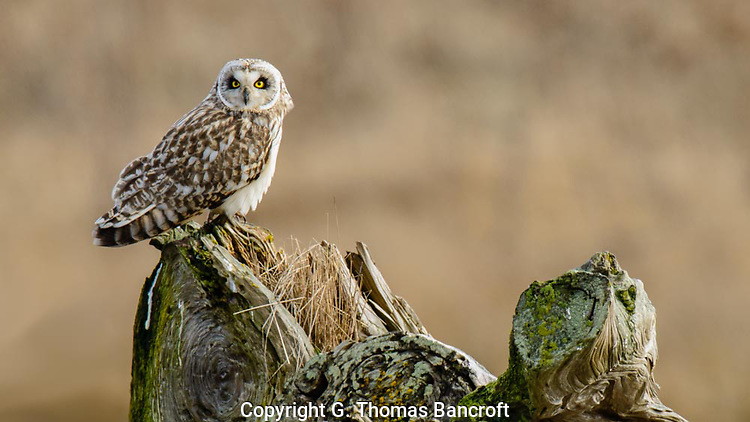 The Snort-eared Owl landed on the stump and looked intently across the marsh. It must have seen something because it quickly flew over the grass, hovering briefly, before flying on. (G. Thomas Bancroft)

On our walk back to the car, we spotted several Short-eared Owls searching for prey.  One flew back and forth across the marsh trying to spot something.  Its wing-beat was like a gigantic moth.  The wing-beats are slow and deliberate, it hovered at times as it quarter back and forth across the marsh.  Several sat on perches, actively looking in one direction and then another.  These owls are much smaller than Snowies, weighing less than a pound.  Their facial mask is quite distinctive with the yellow eyes and dark highlights around the eyes.

We saw a number of other species during the morning.  Bald Eagles and Northern Harriers were hunting in the area.  White-crowned Sparrows, Song Sparrows, Savannah Sparrows, and Dark-eyed Juncos foraged in the fields and several ducks were in ponds along the dike.  Visiting this site is definitely a very enjoyable way to spend the morning.  The Snowy Owls will leave to head back north soon though.

PS:  The Spring Best of Northwest 2013 Art Show is March 23rd and 24th at the Smith Cove Cruise Terminal on Pier 91 next to the Magnolia Bridge, 2001 West Garfield St, Seattle.  I will be there displaying some of my photographs.  Come on down to enjoy the artwork, 150 artists will be present as well as music. 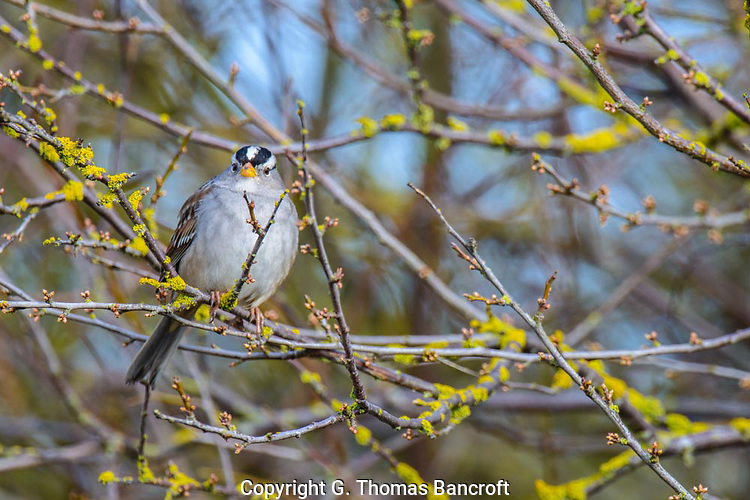 The sparrow jumped up from under a bush as we walked by and looked intently at us. Quickly it decided were were not a threat and dropped back to the ground to feed. (G. Thomas Bancroft)