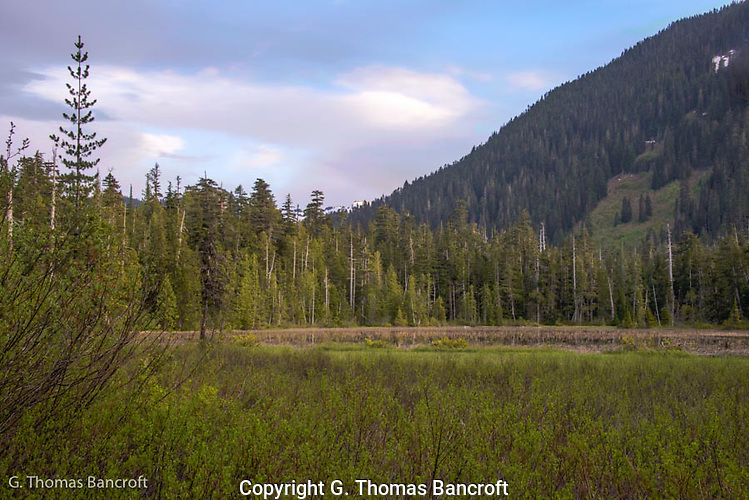 Lily Lake glowed in soft light as the sun began to set. Varied thrush, Towsend warbler and many song sparrows sang during the final light of the day. (G. Thomas Bancroft)

In early June, I camped by Lily Lake in Goat Rock Wilderness.  I wanted to see how the lake changes as light passed through sunset to twilight.    Red cedars, Douglas firs, and western hemlocks lined the shoreline of the lake.  A wide band of alders extended out into the lake.  It looked like a trail extended through the alders that made me wonder if lake level drops as the summer progresses.  I looked for a place that I could climb farther out into the alder band and get a good view across the lake.  I discovered a place along the north shore that I could squeeze around a cedar trunk and walk a few feet out on small mound to have a nice view.    I decided to return here later in the evening to watch.  As I turned to return to my campsite a cascade frog jumped into the water, maybe I will hear them calling tonight?

I returned around 8 pm to watch and listen as light decreased in the forest.  Two common mergansers flew into the lake right when I arrived at my perch.  Song sparrows were singing loudly on either side of me and one hoped through the bushes in front of me.  A varied thrush whistle penetrated the forest from behind me, and a Townsend warbler’s buzzy song drifted from the canopy above me.  After about 20 minutes, the cascade frogs began to call and clearly there were a lot of frogs.  Their calls grew and declined repeatedly.  It seemed that if one began to call then all the rest attempted to over shadow their neighbor.  After a few minutes of full call, they would quite down until the next male started it all over again.  Just before 9 pm, a very small bat began flying back and forth over the alders in an erratic flight pattern as it tried to grab insects from the air.  I hoped it might come closer to me because the mosquitos were a little annoying.

The sun was off to my right and I could not see it.  The clouds above the far ridge changed color as the sun gradually set below the horizon and the lake shifted from yellow-green to having a blue cast as the sun dropped below the horizon.    A little after 9 pm, I turned to work my way back to my camp and listening to the frogs calling as I drifted to sleep. 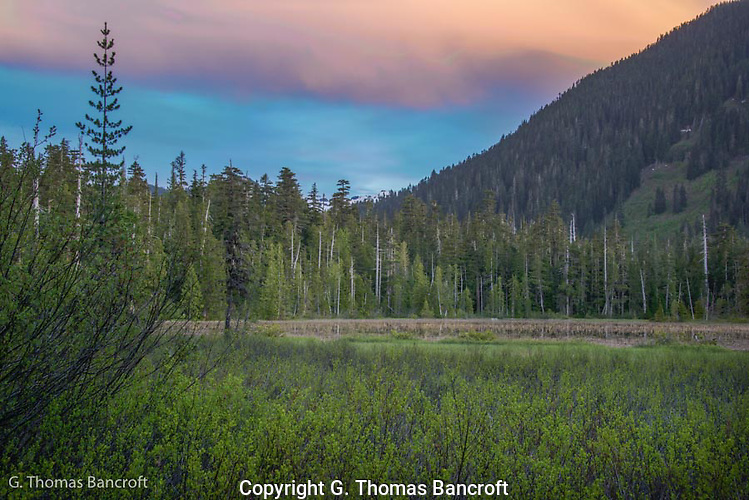 The light turned blue after the sun dropped below the horizon. This created a soft cast to the vegetation while pink continued to show on the clouds above. Cascade frogs continued to call vigorously as we passed to darkness. (G. Thomas Bancroft)