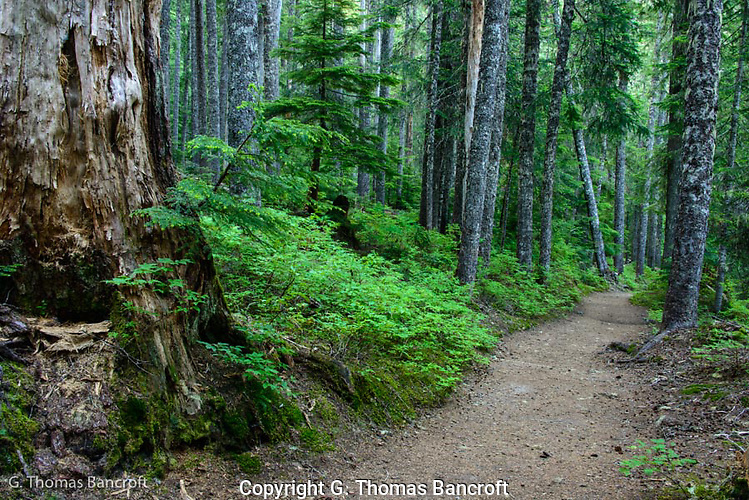 The whistle penetrated the forest.

The Varied Thrush was declaring his own.

Twilight was coming to the old forest.

On July 4 I left my campsite in Mt Rainier National Park a little after 6PM for an evening hike up frying-pan trail in Mt Rainier National Park.  The trail parallels Fryingpan Creek, which drains the area between Goat Mountain and Tamanos Mountain.  The headwaters of the creek come out of Fryingpan Glacier on the east side of Mt Rainier.  The creek was running clear which suggested that not much melt was coming from the glacier right now.  A lush, dense spectacular forest covers the valley floor and up both sides for at least the first several miles up the trail.  Massive Douglas Rirs were scattered through the forest, which was dominated by Silver Firs.  Western Hemlocks and Red Cedars were occasional along the trail.  This is the Pacific Silver Fir zone and is typically found between 3,000 and 4,500 feet, slightly wetter than lower forests, and the trees grow densely.

I heard strong whistles of Varied Thrush as darkness began to come to the woods, the sun had passed over the crest of the hill and the woods were in twilight. A Pacific Wren was calling right along the trail, although I could not find it.  A Wilson Warbler was busy declaring its ownership of some brushy area under the canopy.  The Varied Thrush has this penetrating whistle that is their song.  When you first hear it, it is bizarre and makes me think it is mechanically made.  The song grew on me over time and I enjoyed more and more listening to it in the woods. 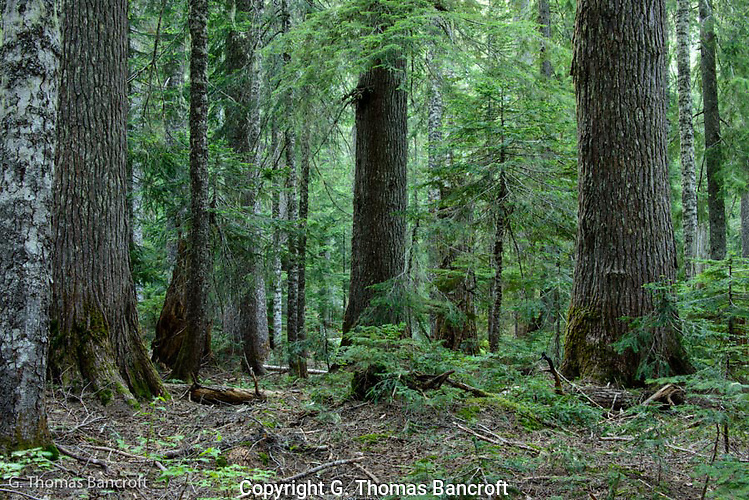 Silver Firs and Western Hemlocks are shade tolerant and have become the dominant species in this forest. (G. Thomas Bancroft)

The air was cool under the canopy and even though everything was dry, it had a damp feeling.  The overhead canopy was very complete, only a small amount of sky was visible when I looked straight up.  A few openings occurred where large tress had fallen, taking other trees with them.  These areas had thick growths of understory species and many young trees.  It must be an awesome sight and sound to have one of these giants crack and fall.  I am not sure I would want to be in the forest when this happened.  The crack and thunder as the tree snapped or pulled from its roots would be loud and frightening. 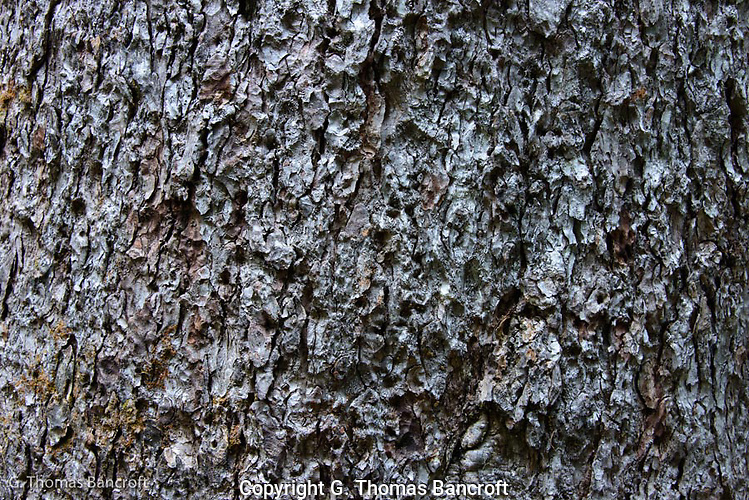 This Silver Fir was close to 4 feet in diameter. It could easily be 400-years old. (G. Thomas Bancroft)

I found a magnificent Silver Fir, the diameter was approaching 4 feet and the bark was wonderfully complex and flaking.  I studied it for quite a while and marveled at how old it must be.  A tree like this might have germinated well before the American revolution.  A big tree like this one could be 400 to 500 years old.  I wonder what all this tree has experienced in the Fryingpan Valley, probably it has seen a lot of comings and goings.  The Silver Fir is a dominant tree species in this valley.  Interspersed are massive Douglas Firs, quite a few Western Hemlocks and a few Red Cedars close to water.  The Silver Fir is shade tolerant, like the Hemlock and seems to be taking over the forest.  Douglas Firs are not particularly shade tolerant but very good at invading open areas.  Come back in another few hundred years and if climate has not changed dramatically or a major disturbance  has occurred the Douglas Firs will be disappearing. 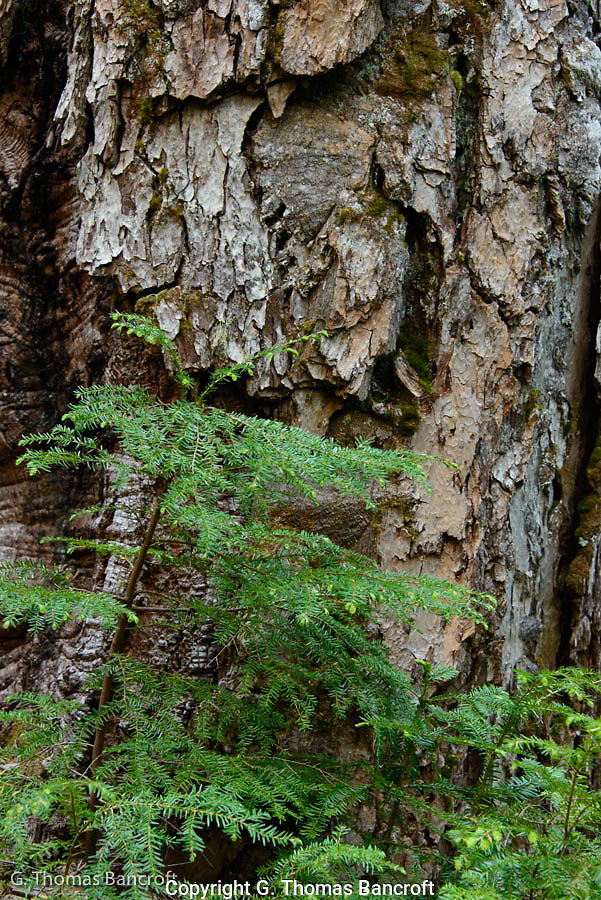 The Western Hemlock sapling was growing out of the base of this Douglas Fir snag. (G. Thomas Bancroft)

I marvel at the number of dead snags and down logs on the ground in these forests.  These ‘virgin’ old growth forests have far more dead wood than I realized.  All the ecology textbooks talk about the importance of dead wood in a forest and how the decay of logs provide important habitat for other species.  Most logs with a little time in the prone position have hemlock saplings growing on them.  Cedars, especially, store a lot of water in the decaying wood and this makes an ideal place for seeds to germinate and new trees to begin growth.  Many hemlocks have sprawled out bases where the roots have grown around a decaying trunk of the previous generation. 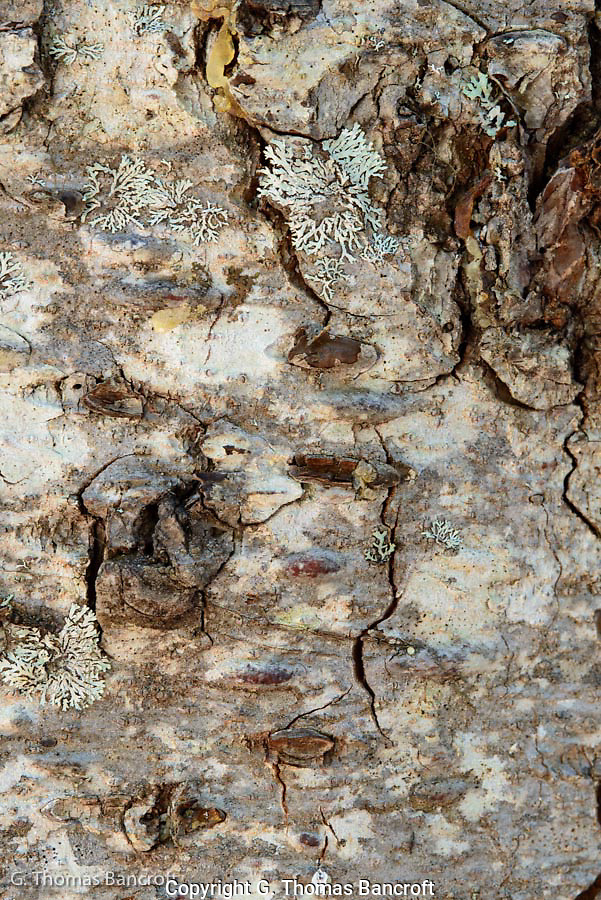 One thought on “The Forest along Fryingpan Trail in Mt Rainier Wilderness Area.”