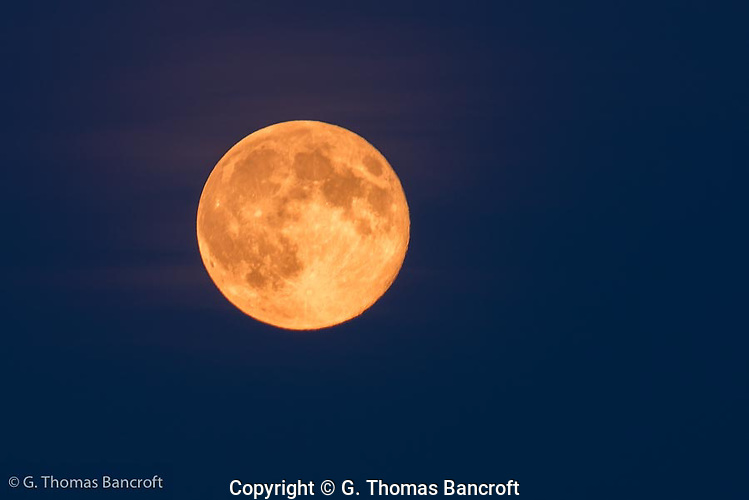 The supper moon in August 2014 as it rises over William O. Douglas Wilderness. (G. Thomas Bancroft)

10 August 2014. The moon was predicted to be a “super moon,” so I headed to Mt Rainier National Park to see if I could find a good place to watch it rise. I hoped the alpine meadow at the southern end of the loop might be perfect. The Photographer’s Ephemeris said the moon should rise at 8:09PM and the sunset at 8:31 PM, a perfect evening.  The direction of the moon would be 104 degrees so a little south of east. I took my compass to explore.

The loop around Naches Peak is a 4.5-miles starting at Chinook Pass on Highway 410. I hiked southeast from the trailhead to the large alpine meadow with a tarn that sits at the base of Naches Peak. I figured the moon would rise over Dewey Lake.

I found a great spot on an outcropping of granite a hundred yards above the trail where I could look east over Dewey Lake in William O. Douglas Wilderness. The Pacific Crest Trail passes by Dewey Lake and joins the Naches Peak Loop trail to the left of my perch. Congress designated this wilderness from national forest lands in 1984 and named it for the Supreme Court Justice. He grew up in Yakima Washington and hiked these mountains as a boy. Throughout his life, he championed wilderness and environmental issues. It was wonderful to have a Supreme Court Justice with such an environmental conscious.

I met and chatted with a number of people as I scouted sites. Naches Loop has spectacular wildflowers at this time of year as well as beautiful views of Mt Rainier to the west so it is not unusual to see people here during the day. Twice before I have stayed out here to watch the sunset behind Mt Rainier and each time everyone had left before sunset. As I searched for my place, I met one photographer that had come to watch the moon rise too. I expected that the two of us would have the place to ourselves but not so. Between 7:30 and 8:00 PM the trail filled with people. I could hear groups of people in both directions from my perch discussing if they had found their place to watch. I bet at least 30 or maybe 40 people were spread in 5 or 6 groups along the trail. 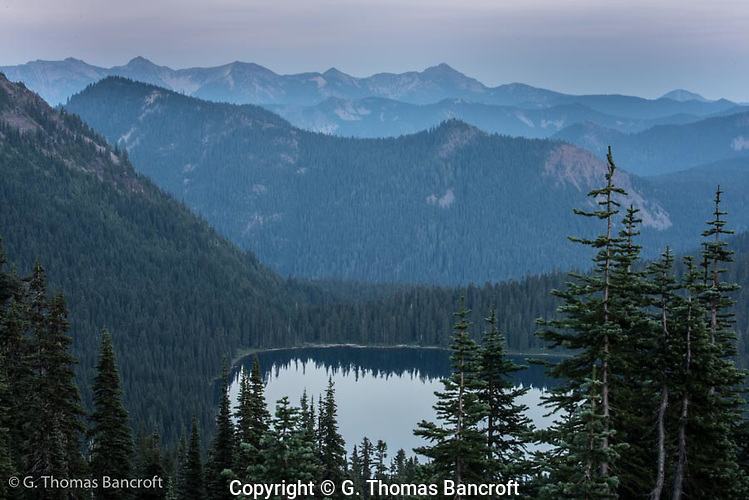 By 7:30 PM, I had settled on my granite outcrop to wait for the show. The sun had already dropped behind Naches Peak behind me so I sat in shadowed light. Seedpods had formed on the bear grass in the surrounding meadow. Two weeks ago, they were in full bloom when I hiked here. As I sat, a swarm of birds joined me. Purple finches, yellow-rumped warblers, and Oregon juncos hung from bear grass stalks, probing the pods. The juncos would drop to the ground and scratch between clumps, scurrying along the ground before flying to the next clump of bear grass while the finches and warblers would fly to the subalpine firs to flit through the branches.  An occasional robin would squawk as it flew to a tree or past my rock. I estimated three-dozen birds enjoyed the evening here. The evening brought back memories of chasing lightning bugs with my sister on our farm in Pennsylvania. Not sure why because the settings are so different. We use to run around the lawn between the house and barn at about this time catching as many lightning bugs as we could. My sister always caught more than me, never could figure out why. We released them before going inside so we could chase them another evening. A warm feeling of contentment settled in me. 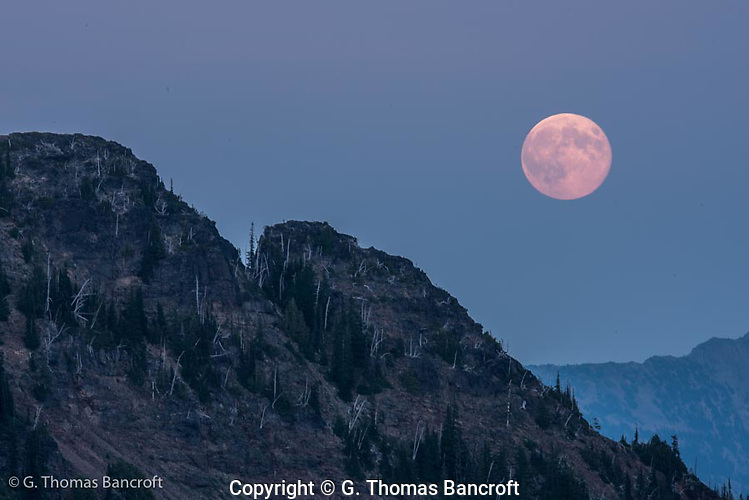 The supper moon rises over a ridge in the William O. Douglas Wilderness. (G. Thomas Bancroft)

A few minutes after the designated time, the moon crept from behind a cliff just to the left of Dewey Lake, glowing red from all the smoke in the air and large as can be. A cheer rose from the crowds along the trail. What fun! The reddish ball slowly rose above the wilderness, creating a rose-colored reflection in the lake below. A number of wildfires were burning up and down the Cascades creating a lot of smoke that added to the evening’s color. I saw craters dotting the moon’s surface including one at the southern pole that radiated fingers out like starfish arms.

At 9 PM, I drifted to the southwest along the trail so I could see what Mt Rainier looked like in the twilight. The western sky glowed salmon color from the smoke, silhouetting Mt Rainier, and putting the meadow and tarn in twilight softness. I stood with a half dozen people just staring at the scene: Mt Rainier, alpine meadow, tarn, and western gleam. All speechless.

My “moon comrades” left so after a while I turned to head back down the east side of Naches Peak to Chinook Pass. Two groups of people that had watched the moon rise near my perch passed me in the opposite direction, heading to the Mt Rainier side of Naches Peak. I had expected to have the 2-mile trail back to the pass to myself but to my surprise I met a number of groups out for a moonlit hike. I met two family groups of at least 10 people with three generations each from grade school to grandma. One group was spread a quarter mile along the trail, some hiking with headlamps and others in the dark. I met two groups of two couples and four couples by themselves. All must have left Chinook Pass after the moon had risen. Many hiked just by the light of the moon. Several of the couples commented that it was a romantic outing for them. My excitement and respect for them increased with each group. A transformative hike!  It was probably good that they didn’t know that I would flush a black bear from his resting spot under a subalpine fir right along the trail at 5:30 AM the next morning. 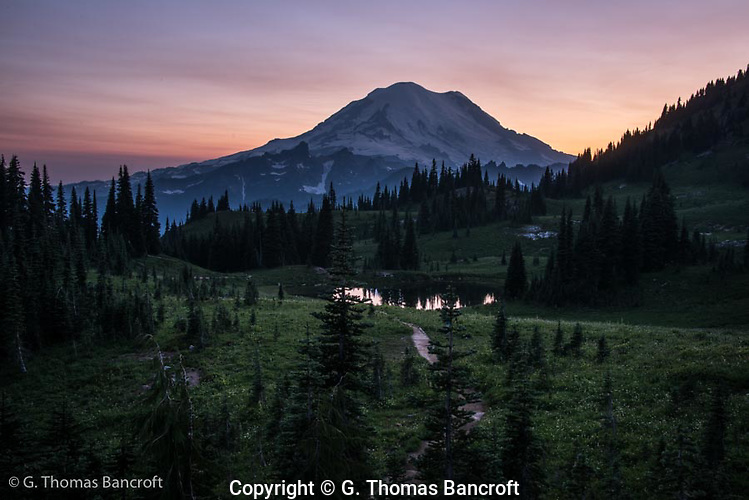 Sunset behind Mt Rainier from Naches Peak Loop Trail. The red in the sky is partly from the smoke from the many forest fires burning in Washington. (G. Thomas Bancroft)

One thought on “The Super Moon rises above Dewey Lake in William O. Douglas Wilderness”