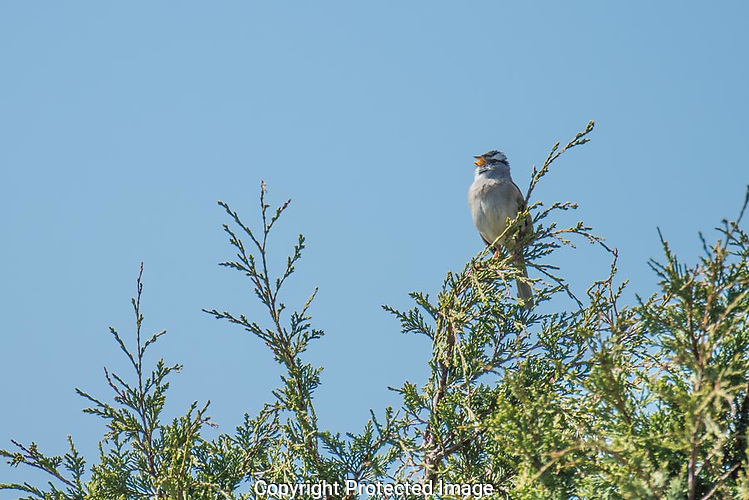 A male white-crowned sparrow sings from the top of a cedar in Washington Park by Anacortes. (Thomas Bancroft)

We had been birding all morning as we climbed onto viewpoint above Burroughs Channel. It was almost noon and we had a good morning searching for seabirds and shorebirds, pretty much ignoring the little tweets.  The sweet whistle followed quickly by several more whistles and buzzes, therefore, caught me off guard.  I stopped to listen again.

We had pulled into Washington Park at Anacortes to search for buffleheads and surf scoters on Rosario Strait. We found several feeding out from the boat landing. They repeatedly dove staying down for 20 to 30 seconds while they searched for tasty morsels. My birding partner spotted a white flash way off shore and we discovered a pigeon guillemot stretching on the gentle swells. With each stretch of its wings, its white patches flashed in the noon sun and the white contrasted with the black body plumage. A common loon in its new nuptial plumage cruised by as we climbed back into the car to head to Green Point. At the point, five red-necked grebes bobbed in the waves; they had shifted from their drab winter plumage to their nuptial plumage with the distinctive rufous neck that gives them their name. We, also, heard the loud cries of a black oystercatcher pair and ran to the edge but to no avail.

So what was this sweet whistle I just heard above Burroughs Channel?

As we strolled down the slope toward the source of the whistle, I realized that we could hear a line of these songs echoing in both directions through the scattered cedars and pines. These songs declared that each vocalist owns their individual patch of habitat. Finally, one called in a cedar not far from where we stood. I crept around the edge of the tree to find a white-crowned sparrow on the top singing its sweet melody. We stood for quite a while listening to him bellowing out his song as strongly as any opera singer.  In 1772, J. R. Foster got it right when he called this one of the most “elegant little species.” This little bird is one of the most intensely studied species in the world. It breeds across western United States and north into Canada and across the Arctic. Just like people, these little guys have distinctive dialects depending on where in their range they breed. A number of years ago when I heard one singing in Denali National Park, I remember that I didn’t recognize it. It looks like I still can’t seem to keep all their dialects straight. We found a nice bench just above the cedar and sat to eat our lunch and listen to his solo version of “I will always love you.”

Here it is if you would like to hear it too.