A few ochr sea stars clung to rocks at low tide as the waves came in and out. I used a slow shutter speed to create a ghostly feeling to the scene. I sat and watched the waves for a long time, relaxing more with each passing wave before I moved along the shoreline. (G. Thomas Bancroft)

I was standing at the top of the beach among the drift logs when I heard the chatter notes of a Wilson’s Warbler in the bushes under the trees along the slope.  I turned to see it jump from branch to branch singing as it searched for bugs.  It made me think about how abrupt and quick the transition is from forest to beach to marine habitat.  In a short stretch of 100 yards or so, we see a complete change in the ecosystem and the species we might see.  Some do cross these boundaries in their quest for survival and reproduction; others like the Wilson’s Warbler are restricted to only one.

As I continued down the beach, I heard the cries of a Bald Eagle and looked above to see two Eagles circling peacefully above the beach until a few crows flew up to harass them.  One of the Eagles dropped down to land for a few seconds on the beach before it joined the first and they sailed over the rock outcropping and out of sight down the beach.  A pair of Black Oystercatchers worked along the edge of the surf probing into the sand for possible morsels.  The rolling twitter of a bird caused me to turn and look to see a Whimbrel flying out from the beach to make a broad arch around me and headed north.  This species is passing through Washington from its wintering grounds to the Arctic for the breeding season.  A Harlequin Duck was sitting on a rock in the surf while several male Surf Scoters were actively foraging just beyond the wave line.    These two ducks should be heading to their breeding grounds pretty soon. 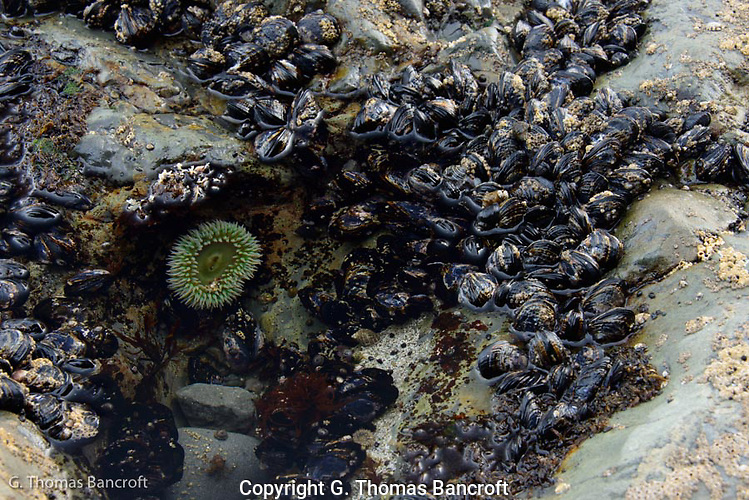 The mussels formed a dense clump around this small tide pool. A single giant green anemone was in the shade in the pool. The mussels are favorite food of the ochr sea stars and therefore tend to be found higher in the intertidal zone that sea stars can go. (G. Thomas Bancroft)

I finally arrived at my destination along the beach; a large rocky cliff that extended out perpendicular from the beach into the ocean.  Several sea stacks showed that the cliff had once extended even further.  The sandy beach shifted to a rocky shore and I had come to look for tide pools and what I might find in them.  These rocks and pools of water can be full of life and you can get quite close to it because they either don’t move or moved very slowly.  I had planned to sit to see what new things I could discover by patiently watching the scene.  I had an hour before the sun would begin setting and I hoped to watch the sunset from this vantage point. 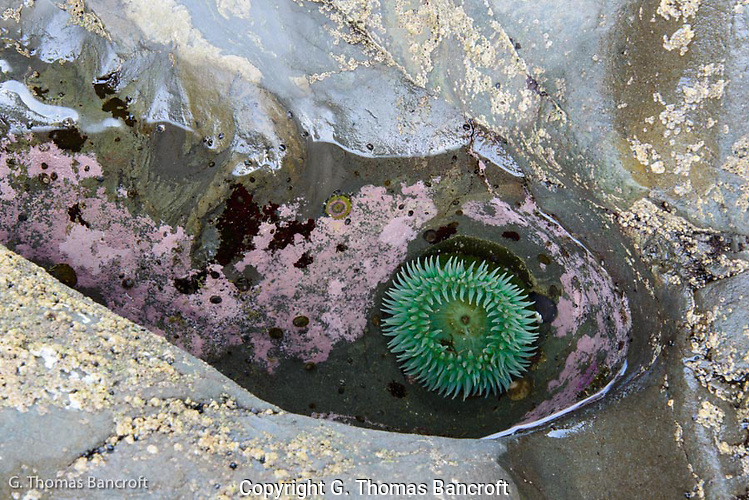 The small tide pool had a wonderful example of the giant green sea anemone. The anemone was 3 or 4 inches across and you can easily see its mouth in the middle of its circle of tentacles. (G. Thomas Bancroft) 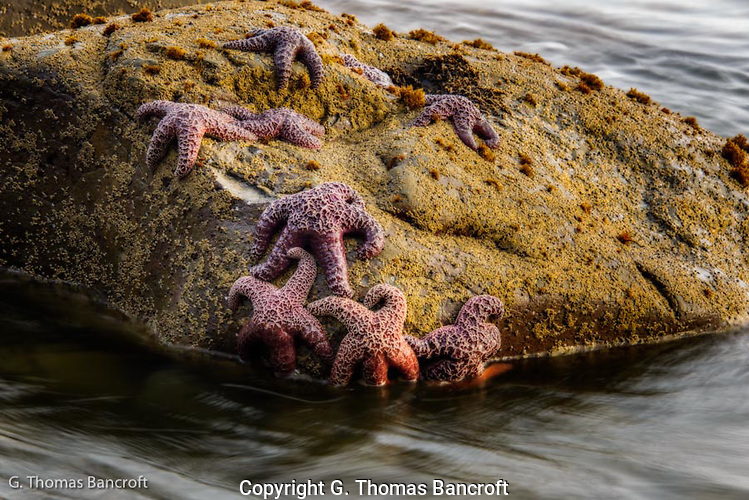 As the tide fell, the ochr sea stars became exposed and easily seen. Their tube feet help them hold tight to the rock as the waves crashed across them. (G. Thomas Bancroft)

Several Ochre Sea Stars were tightly attached to rocks.  These orange or purple starfish can hold the rocks with their tube feet as waves wash across them.  The starfish feed on barnacles and mussels; which were common on the rocks.  Several mussel patches were a yard or more across and contained hundreds of mussels.  The mussels do best above the zone that the starfish can reach.  The giant green sea anemones were in several of the pools.  The tentacles radiate out from its top and the anemone waves these appendages with their stinging cell through the water to capture possible prey. 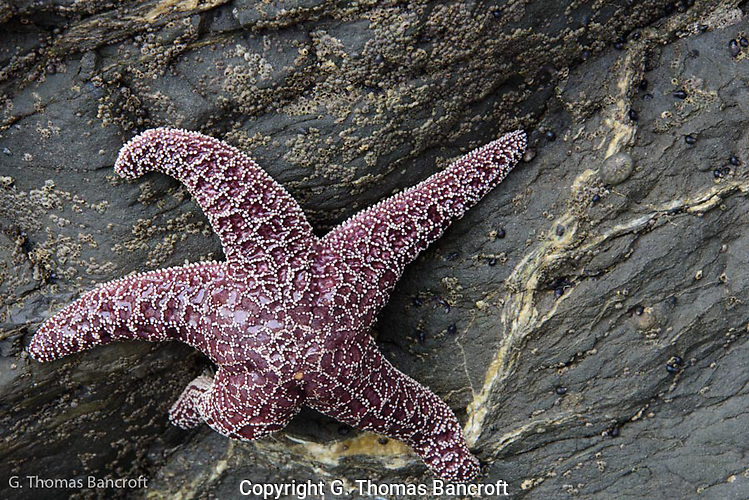 The design on the back of this ochre sea star was intricate and fascinating. The tide had fallen just below it allowing me to look closely at it. A band of quartz in the rock helped to frame the sea star. (G. Thomas Bancroft)

The sunset was worth the wait.  Watching the waves flow in and out as the sky gradually changed was serene.  After the sunset, I headed down the beach to return to my campsite.  As I walked through the twilight, a harbor seal poked its head out of the water to study me.  It swam parallel to me for a hundred yards before it gave up interest in me and returned to its other activities.  What a relaxing afternoon, definitely experiencing wilderness in Washington is a treasure. 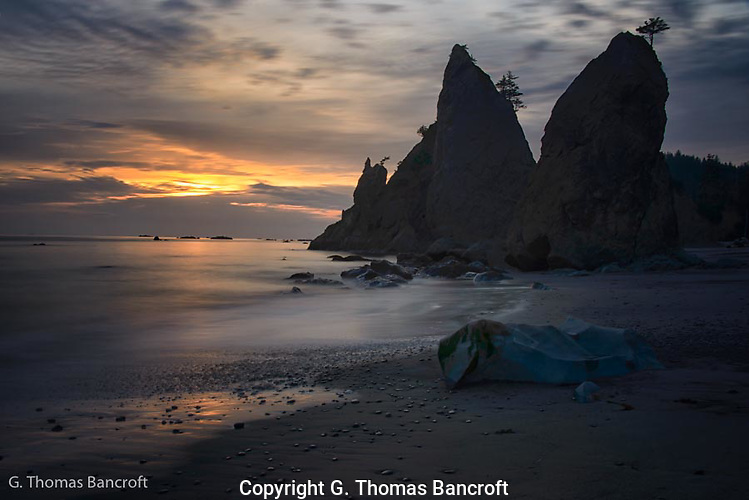 As the sunset created a very tranquil setting to watch the waves slowly flow in and out. I used a slow shutter speed to soften and blur the waves. A few trees cling desperately to the sides of the sea stack. (G. Thomas Bancroft)

2 thoughts on “Tide Pools at sunset in Olympic Wilderness Area”