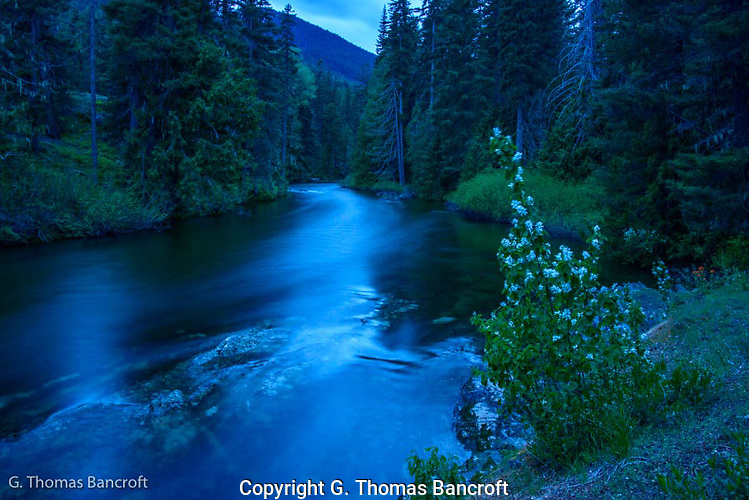 The light turned blue as twilight moved across the landscape. The western serviceberry glowed in the foreground and the creek became soft with the blur created by a slow shutter speed. I found it a very relaxing scene to sit for a while. (G. Thomas Bancroft)

I walked down to Icicle Creek as the sun was setting to find a place to sit and wait for twilight.  Twilight is such a magical time of the day.  Often the wind subsides for a few minutes as the warmth of the sun disappears and before the chill of the night takes over.  A blue cast comes across the landscape, as the remaining light is the blue wavelengths that curl around the surface of the earth.  Icicle Creek is on the east side of the Cascades so the sun will dip below the high peaks a little earlier than on the west side and I wanted to see if this allowed twilight to last longer than on the west side.

I found a place with a western serviceberry bush in full bloom on the bank of the creek and a scattering of paintbrush plants.  A very light breeze was flowing down the creek with the current, a few American Robins were singing softly in the background.  I settled to watch the sunset and wait for twilight.  The flow in the creek was up because of snowmelt at higher elevations.  Icicle creek is the major drainage on the east side of Alpine Wilderness Area.    Hemlocks, alders and various bushes line the creek.  Rocks in the creek bed created small rapids immediate upstream from my spot while a quick drop below me made for quite dynamic rapids.  The sound of the rapids was relaxing.

As the sunset, the robins stopped singing and except for the sounds of the rapids the forest became very quiet.  I had my camera set on a sturdy tripod before the sun went down so I would not have to turn on my flashlight.  I took a series of long exposures as the forest moved through the blue twilight to darkness.  I sat for an additional 20 minutes after it was dark just enjoying the tranquil setting and the sounds of the creek before I rose to head back to my campsite.  I was pleased with the serene mood I captured in the photograph.  Let me know the feeling it conveys to you?  It is so wonderful to be able to enjoy the wilds of Washington.

2 thoughts on “Twilight on Icicle Creek in the Cascade Mountains”