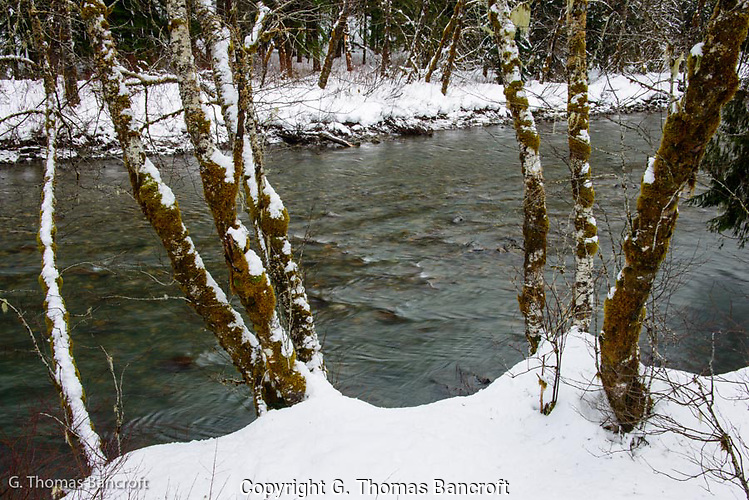 The pattern of moss, snow, and bark on the alders were enticing against the background. Light rain was starting to melt the snow. (G. Thomas Bancroft)

In winter, the Forest Service closes a gate across Mountain Loop Road about 25 miles east of Granite Falls, Washington.  I arrived at the gate at dawn to walk up the valley.  Rain showers were happening at regular intervals and the light was soft and even with the cloud cover.  The walk parallels the Stillaguamish River and has great views of the river and surrounding mountains although the low clouds blocked seeing the mountains this morning.   It was just above freezing but there was still snow on some of the spruce branches and trunks.  The alder trunks with a combination of snow, moss, and bark were quite attractive especially where the river back dropped the trunks. 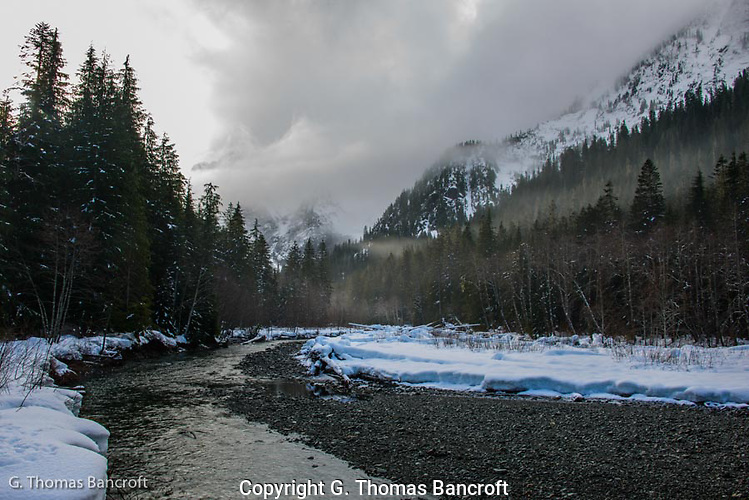 The sun started to peak through the clouds as it continued to rain lightly. As I was looking up river, an American Dipper flew into the picture and began to take a bath in the shallow water before flying up river. (G. Thomas Bancroft) 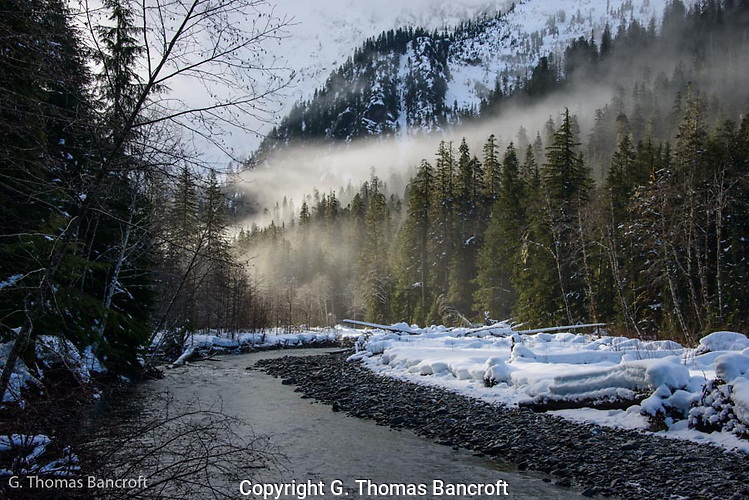 The fog flowed down the valley in waves and the sun made it stand out against the continuing storm on the mountain. (G. Thomas Bancroft)

The snow on the road was well packed down but I was the only person there until noon when I was headed back to my car and two groups of cross-country skiers passed me headed up the road.  The solitude was wonderful.  There was no wind so the valley was quiet except for a few birds.  A flock of siskins flitted around the tops of few spruce for a few minutes and a raven flew down the valley squawking at one point.

I heard a steller’s jay fly into a bush along the north side of the trail.  The bird dropped down to the ice and hopped along the edge of the ice dipping its bill into the water at several places to take a drink.  It then flew up on the snow bank and poked around for a few seconds before flying off.  An interesting set of animal tracks came across the snow and looked as if the animal was moving pretty quickly.  The three or four prints were close together in the snow and each set was three or four feet apart.  I saw elk prints elsewhere but these looked too small for elk. 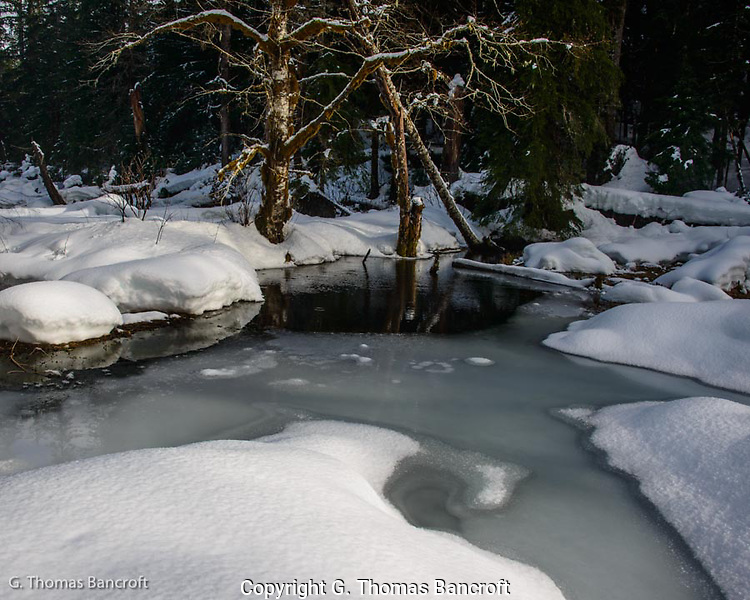 A steller’s jay flew into this spot as I was looking and hopped along the edge of the ice taking a drink from the open water. I was intrigued by the reflection in the open water and on the ice. The deep snow framed the pond. (G. Thomas Bancroft)

Mid morning the storm began to clear and blue sky was visible through the trees.  The mountain peaks looked like they were covered with a fresh layer of snow.  Fog moved into the valley and waves of fog passed by me as I walked along the trail.  Several times, it was quite tranquil as the landscape had a combination of fog, blue sky, and sunlight highlighting the vegetation.  I stood for a while along the bank of the river and enjoyed the serene view.

I spent four hours enjoying the great valley.  It is definitely a place worth another visit. 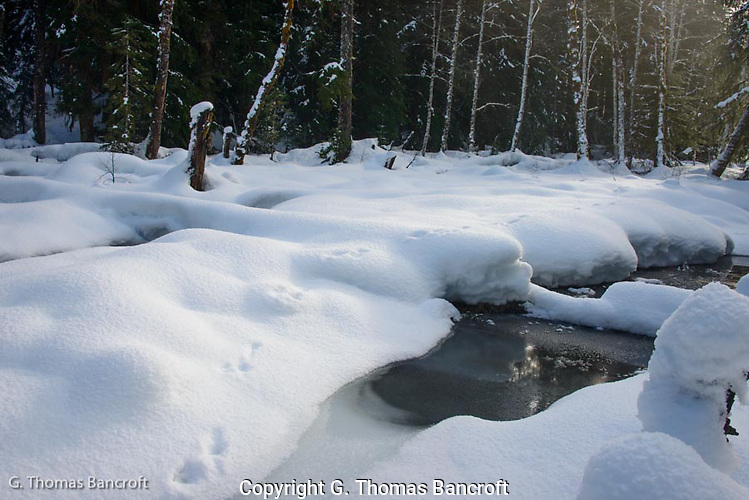 I wondered what animal had traveled across the snow. The set of footprints were spaced several feet apart suggesting the animal was running. (G. Thomas Bancroft) 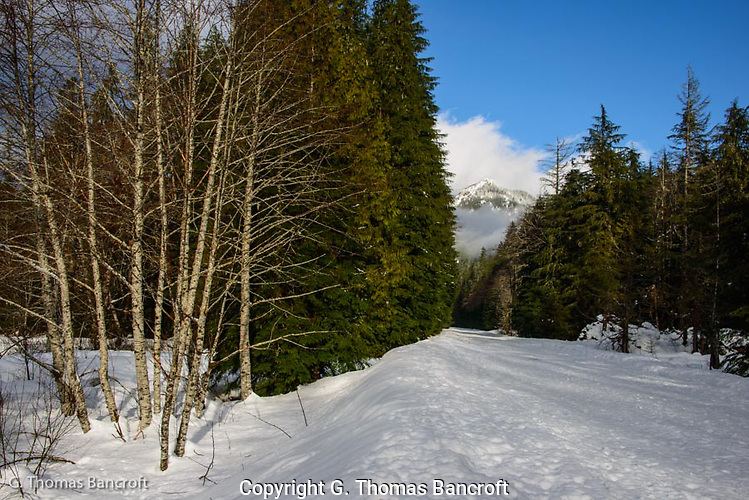 Blue sky suddening appeared and the rain stopped. The light on the alders made them shine and the mountain peak in the background stood out. (G. Thomas Bancroft) 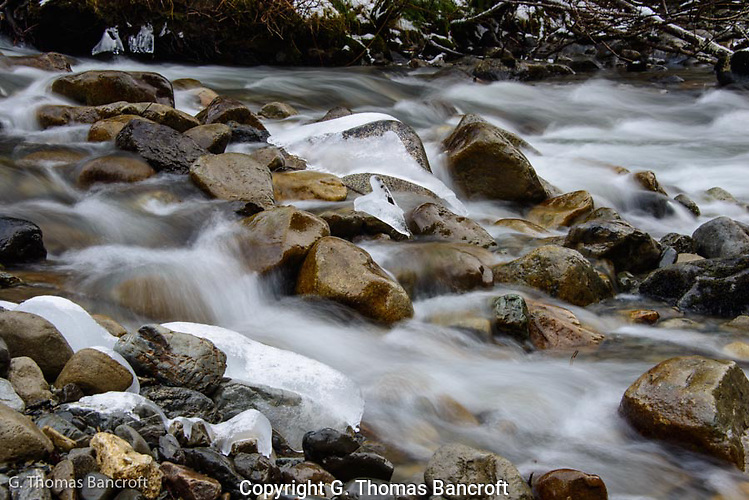 Chunks of ice remain on the rocks in the creek. I wondered if the creek was a little higher when the ice formed and the current level was not melting it. (G. Thomas Bancroft)