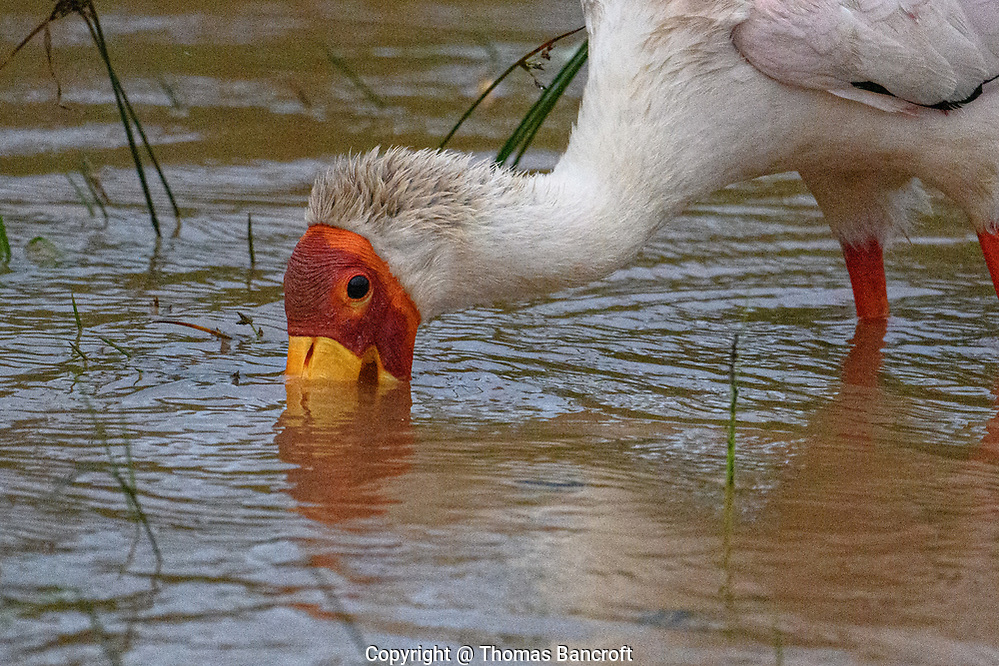 The long bill of a Yellow-billed Stork allows the bird to feed in water more than a foot deep. The bill is highly sensitive and when it touches a prey item, it snaps shut. (Thomas Bancroft)

Only the base of the yellow bill showed above the water. The bird’s beak was pointing straight down, and it moved back and forth, latterly. A Yellow-billed Stork, my first ever sighting, was feeding in a small pond in Nairobi National Park. My brain wanted to study every detail of this bird, watch its behavior, see what I might recognize. But two male African lions were lying on the road between me and it. They, too, demanded my undivided attention. 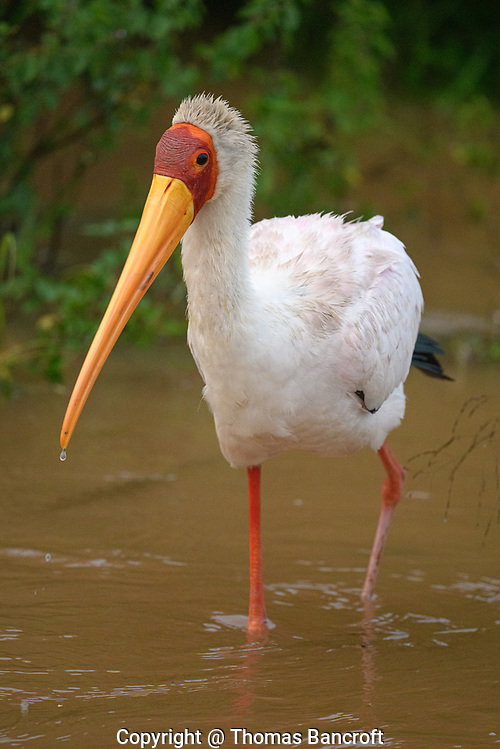 The Yellow-billed Stork is one of four members of the genus Mycteria. The Milky Stork lives in Southeast Asia and the Painted Stork on the Indian subcontinent and east into Southeast Asia. The fourth, the American Wood Stork, lives in the southeastern United States and Latin America. I spent more than a decade working to understand their needs in Florida, the threats to their survival, and the things Americans should do to recover populations of this species. At the time, the Fish and Wildlife Service had listed the Wood Stork as Endangered in the United States.

The Yellow-billed looked remarkably similar in overall shape, size, and configuration to the Wood Stork. The bill length, more than a foot, was identical to a Wood Stork and was stout in diameter.  As the beak went back into the water, the tip opened about two inches. The bird began moving it again, seeing if it would touch a prey item. Highly sensitive sensors detect the brush of a fish or shrimp, and the bill then snaps shut, hopefully, capturing prey. Both stork species feed in virtually the same manner, and they wander in response to rains. Decreasing water levels help to concentrate prey and make fishing ideal. 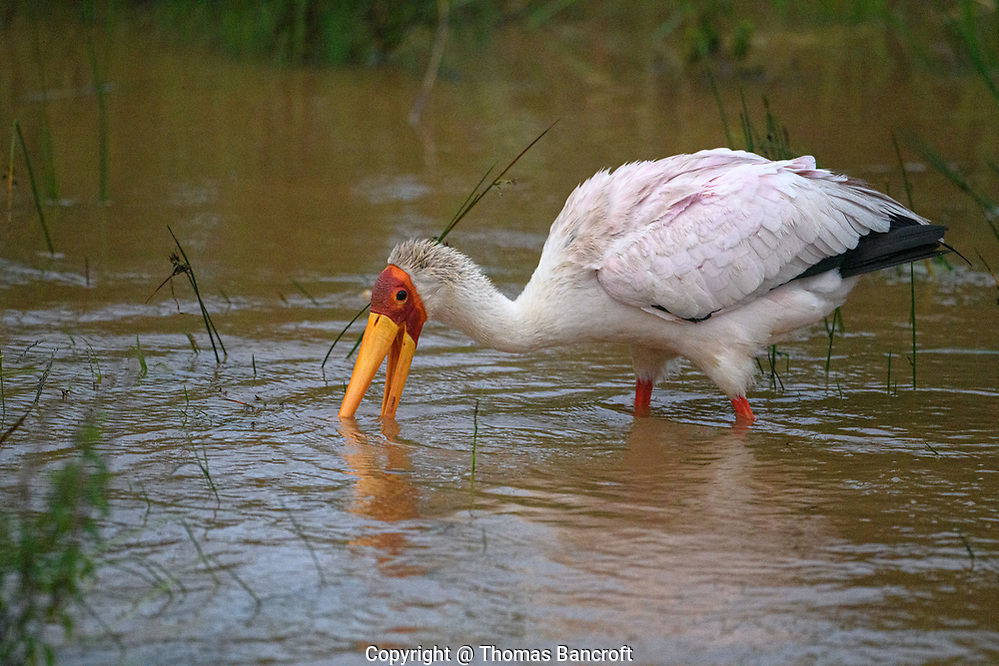 The Yellow-billed Stork feeds by opening its bill and placing it into the water. It then moves the bill laterally., snapping shut when it touches a prospective prey item. (Thomas Bancroft)

Historically, through the 1960s, the majority of Wood Storks in the United States nested in South Florida. But as people drained Florida’s wetlands and altered the natural pattern of water flow, their numbers plummeted. By the mid-1980s, they had begun to nest farther north but still relied on the Everglades and Big Cypress as important feeding areas. While working for the National Audubon Society, I helped do a complete survey of all known breeding colonies in Florida, coastal Georgia, and Southeastern South Carolina. We used a small plane to circle them, counting the active nests and to search for new ones. Our work in the Everglades resulted in me being asked to serve on a technical panel that helped design a restoration strategy for water quality in the Everglades. The Florida legislature passed a law to implement that plan. 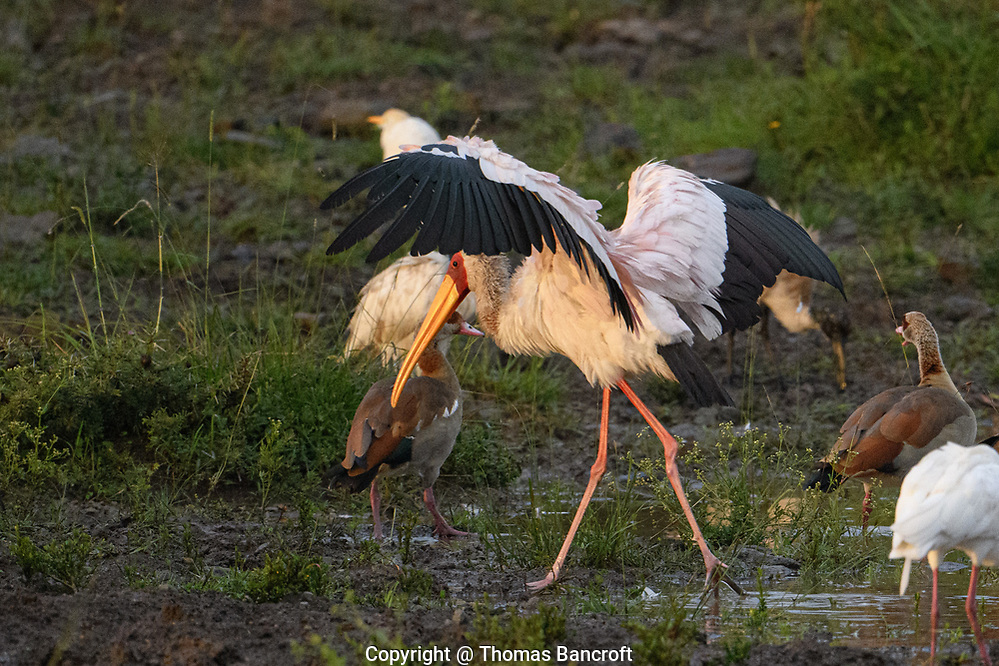 An adult Yellow-billed Stork spreads its wings as it walks onto the shoreline of a small pond in Nairobi National Park. (Thomas Bancroft)

Like all adult Yellow-billed storks, the head on this bird had no feathers from the base of the bill to just behind the eyes. The skin there was a fire-engine red and contrasted with the body feathers that were pure white. The flight feathers and rectrices were black. Yellow-billed populations have been decreasing in Africa, but Birdlife International still considers their numbers okay. This bird methodically worked across the shallows, moving that bill rhythmically back and forth, occasionally pulling it out of the water. I never saw it catch anything. 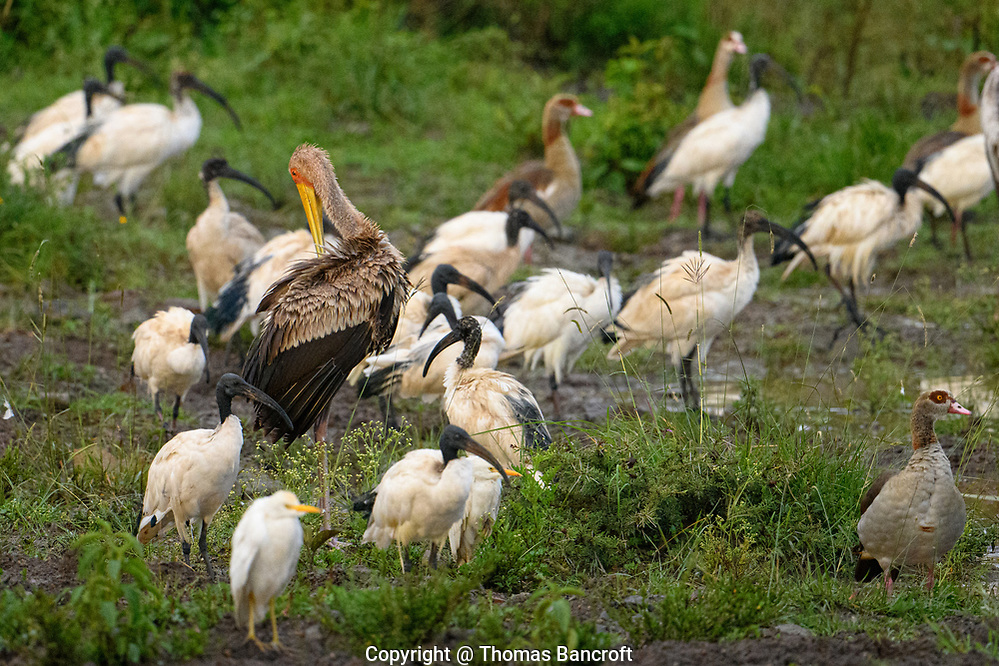 On the far shore, among Sacred Ibis, Cattle Egrets, and Egyptian Geese, sat a juvenile stork, preening its feathers. The bill was yellow and the face red, but the body feathers were a light brown. I smiled, seeing this young bird; last year’s breeding season had been successful. A second juvenile moved into the water and began to feed. His grayish legs were two feet long, and his toes spread wide to give it support on the mud. It started to probe in the shallows.

Successive Republican administrations at the state and federal levels have delayed Everglades’ restoration. Public support, though, remains steady and slow progress is being made. Fortunately, Wood stork breeding populations have stabilized around 6,000 pairs, resulting in the Fish and Wildlife Service downgrading them from Endangered to Threatened.

Hopefully, in the years to come, we will see populations of the American Wood Stock fully recover, and ones of the Yellow-billed Stork be maintained or improved.

The two male lions slowly rose to their feet and began to head up the road. Their gate was slow but deliberate — two old brothers out for a stroll. 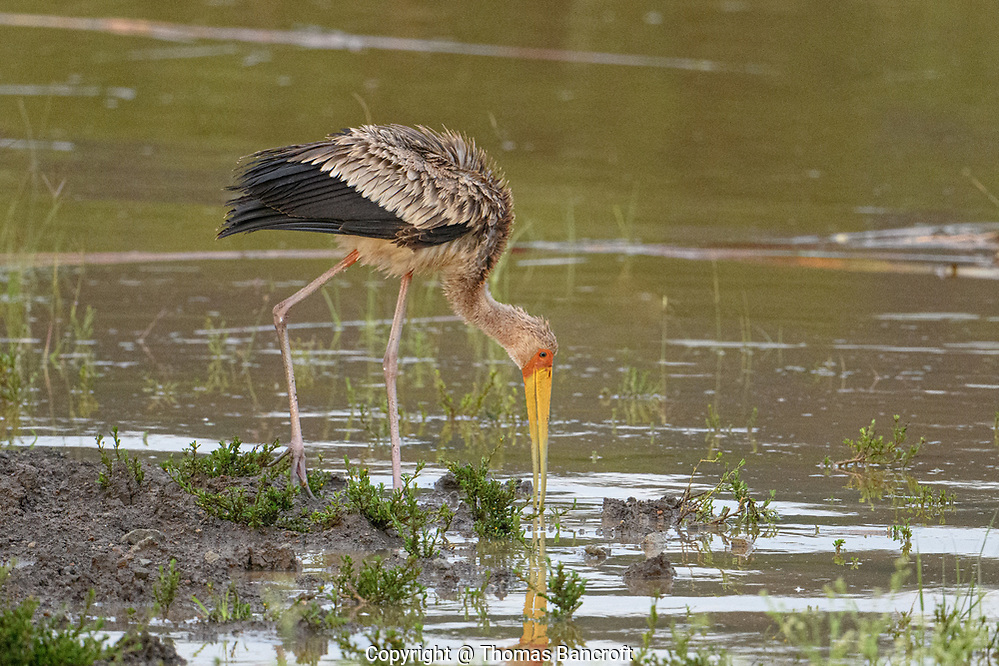 A juvenile Yellow-billed Stork begins to probe in the shallows for possible food itens. (Thomas Bancroft)